With the lacerating love story Sid & Nancy, Alex Cox reimagines the crash-and-burn affair between punk’s most notorious self-destructive poster children: Sex Pistols bassist Sid Vicious and his girlfriend, Nancy Spungen—brought to visceral life by brilliant performances from Gary Oldman and Chloe Webb. Cox turns his anarchic filmmaking style on the explosive energy of the London punk scene and the degenerate streets of seventies New York, making for an eviscerating depiction of excess and addiction. Through the lens of cinematographer Roger Deakins, the imagery goes from swooning to grimy, and the film’s bleakness is balanced with surreal humor and genuine tenderness, making for an affecting, music-fueled vision of doomed love.

For a bass guitarist who (allegedly) couldn't actually play bass guitar, contributed very little musically to the band he was a member of, and whose career (and, sadly, life) flamed out in a period of less than two years, Sid Vicious cast a very large shadow over the music scene and popular culture of the late 1970s. Though not the frontman for the Sex Pistols, he quickly emerged as the band's breakout star and an icon of punk music and youth rebellion before dying at the age of just 21. Given that a big point of the punk movement was to tear down and piss all over conventional ideas about music and entertainment and culture, any attempt to make a movie about Sid Vicious' life faces the daunting challenge of avoiding the usual formulas and clichés of the bio-pic genre. For Sid & Nancy, director Alex Cox uses the excuse of a bio-pic to take viewers on a wild ride through the punk scene of the era.

After making a splash with the punk-infused cult comedy Repo Man, Cox seemed like an ideal choice to helm a movie about the Sex Pistols. The filmmaker claims that he was stirred to write the screenplay mainly to quash a competing project being developed for Rupert Everett and Madonna (which indeed sounds like a horrible idea). Evident from the title, he frames Sid's life through his relationship with groupie, girlfriend and addiction enabler Nancy Spungen. Viewed from an outside observer's perspective, Nancy could be seen as a parasite, whose short temper, mental health issues and unchecked drug dependency matched and amplifed Sid's own problems in these areas, ultimately leading to both their deaths in a very short time. Nevertheless, Sid was instantly infatuated with her, and the film views their tempestuous love affair from his point of view. Despite their constant fighting, struggling for money, deteriorating health and the eventual breakup of his band, Sid is continually drawn back to Nancy. When she dies first, he can't last much longer without her. In many ways, their story is a classic romantic tragedy, albeit one that wallows in a world of degenerate behavior and filth.

That Sid and Nancy's romance was doomed from the start surely came as no surprise to anyone who knew them, and its outcome is famous enough that Cox plays no games trying to hide it. The film opens in the immediate aftermath of Nancy's death. Certain details of the event are a matter of record and not in dispute: On the morning of October 12th, 1978, Nancy's body was found on the bathroom floor of the room she shared with Sid in the Hotel Chelsea in Manhattan, dead from a knife wound to the abdomen. Sid gave conflicting statements to police as to whether he stabbed her or not, and was so strung out that he probably didn't know or remember what really happened. Although charged with murder, Sid would be dead himself from a drug overdose in less than four months, before the case could go to trial.

The movie quickly flashes back to their first meeting to show us how things got to this point. Cox presents his theory of how Nancy died, and it seems plausible enough, but friends who knew the real couple deny it and were not pleased with either that scene or the way the film fictionalizes other details and events. (The depiction of Sex Pistols lead singer Johnny Rotten seems to be a major point of contention, and the actual man has vocally denounced the movie on many occasions). Such complaints are to be expected from any depiction of a true story, and they may even have merit. However, that shouldn't detract from the work as a piece of art or entertainment for someone who doesn't have a vested interest in seeing themselves or their friends portrayed flatteringly. 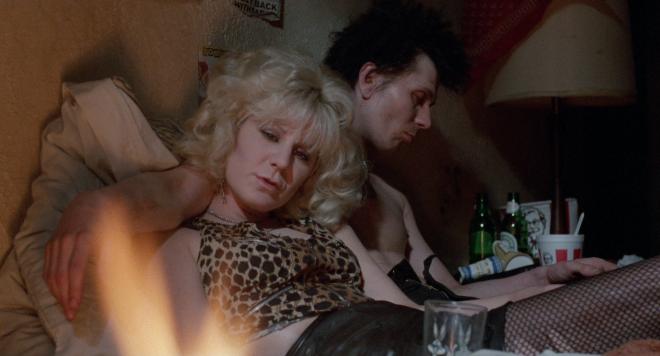 To play Sid, Cox cast a relatively unknown young actor named Gary Oldman, who had worked mainly in theater at that point, but whose role as a skinhead in Mike Leigh's TV movie Meantime caught some critical attention. Oldman claims that he didn't like punk music and only took the job for the money, but he clearly poured his all into it. His Sid is a creature of pure id who steamrolls through life unable or unwilling to give a fuck about anything or anyone (in other words, the perfect embodiment of the punk ethos), until he meets Nancy. It's a remarkably tricky feat on the actor's part to make an infantile monster with no impulse control into a sympathetic tragic figure, but Oldman pulls it off with extraordinary charisma.

In her first film role, Chloe Webb delivers a very shouty and grating performance as Nancy. That's not a criticism. Archival footage of the real woman shows that Webb is pretty bang-on accurate to how she behaved. Again, once you get past the surface abrasiveness, the character has unexpected layers.

Equally important to either of these two players is Cox's work with up-and-coming cinematographer Roger Deakins. The photography in the film is exquisite, far better than any that Cox would work with again in his future efforts. The two men find many moments of beauty and tenderness in the squalor of the story's setting – most famously the signature image of the two lovers kissing beside a dumpster as trash inexplicably rains from the sky around them. It's lyrical and repulsive all at once.

One thing the movie fails to do adequately, unfortunately, is provide a clear sense of just how big a star Sid Vicious was at the height of his fame. References to albums and concert tours are mostly oblique and left off-screen in order to focus on the characters' personal lives together. That may be primarily a consequence of the film's low budget (it's hard to fill a stadium with screaming concert fans when you can't afford to pay that many extras), and the movie makes an artistic justification for it, but viewers are still left feeling that a big part of Sid's life is missing.

Aside from that small complaint, and possible concerns about factual accuracy, Sid & Nancy is an exuberant look at the height of punk rock, seen through the eyes of two broken misfits at the center of a cultural shockwave they helped create but couldn't control.

The Criterion Collection first signed Sid & Nancy to its label back in 1995 for a Laserdisc contract. A DVD port followed in 1999, after which MGM took back the rights to the film for subsequent DVD editions and eventually a so-called Collector's Edition Blu-ray in 2011. With another six years gone by, Criterion has relicensed the title for its own new Blu-ray, which combines most of its old original content with some new material and a freshly remastered video transfer.

The Blu-ray comes in one of Criterion's standard clear cases and includes a booklet with a couple of short essays. All of Criterion's packaging and liner notes spell the film's title with an ampersand between the names, which is consistent with most original theatrical posters for it. However, the actual title card at the beginning of the movie is spelled Sid and Nancy.

MGM's Blu-ray from 2011 received some pretty strong reviews at the time, but Criterion has gone the extra mile to freshly remaster the film with a new 4k scan supervised by cinematographer Roger Deakins. I can hardly imagine it looking better. Although I don't have the old disc myself, screenshots found on the web look positively dull and drab compared to the Criterion copy.

The 1.85:1 image is nicely sharp and detailed, with excellent contrast that reveals Deakins' careful sculpting of light and shadow. Colors, especially in the first half of the movie, are very bold and striking. Lipstick, spraypaint graffiti and Johnny Rotten's orange hair really pop off the screen. By design, the color pallette becomes increasingly subdued and almost monochromatic as the characters sink into drug addiction and depression. This is accurately rendered as well.

The photography in Sid & Nancy is fairly grainy at times to emphasize the grittiness of the setting. For the most part, this is handled well. Unfortunately, like many Criterion Blu-rays, the 1080p/AVC MPEG-4 encode sometimes struggles and the grain can come across as overly noisy. However, this is most bothersome when freeze-framing for screenshots and isn't as much an issue during normal playback. 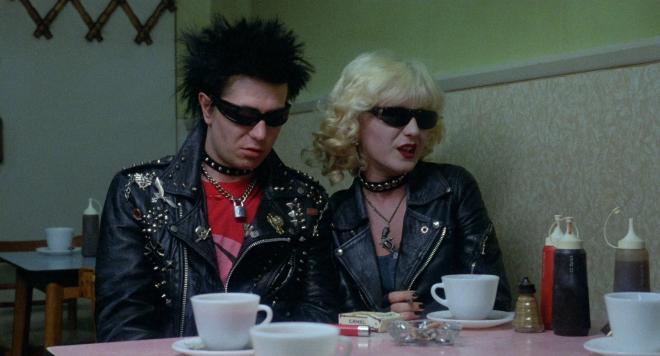 Criterion offers the movie's soundtrack in either PCM 2.0 stereo or DTS-HD Master Audio 5.1 formats. The disc menus, case art, and liner notes in the accompanying booklet all point to the PCM track being considered the primary listening choice, while the 5.1 is described as an "alternate" option. My assumption is that this means the 5.1 remix was carried over from the old MGM Blu-ray (and probably dates back to an even earlier DVD) mainly for the sake of thoroughness, but Criterion put most of its effort into the clean-up and presentation of the original stereo mix. As such, I defaulted to stereo while watching the movie.

The PCM track has clear dialogue (occasionally clear enough to expose ADR dubbing), crisp sound effects, and good stereo separation in the music. It's difficult to judge fidelity when dealing with punk music, but the performance scenes in the film are certainly loud and throbbing, which is probably as much as you can ask for. Original music, mainly provided by Joe Strummer and the bands The Pogues and Pray for Rain, have better and richer musicality. All sound good.

I sampled portions of the 5.1 track. Although it sounds decent enough on its own, the PCM stereo seems more vibrant and alive. 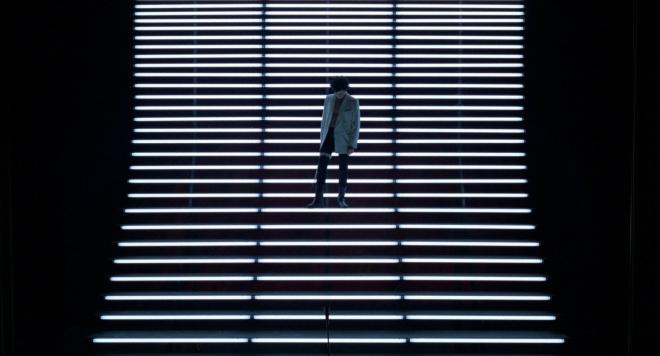 The bonus features on Criterion's new Blu-ray are a mix of vintage material that dates back to the label's 1995 Laserdisc and 1999 DVD, along with a few new pieces. 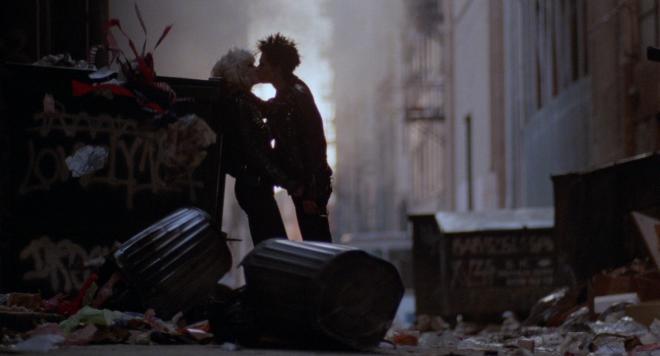 While its accuracy to the true story may be debatable, Alex Cox's Sid & Nancy is a wild and entertaining (and ultimately heartbreaking) trek through the 1970s punk music scene, and features a blistering performance from Gary Oldman as doomed Sex Pistols bassist Sid Vicious. The Criterion edition looks and sounds great and has some very interesting bonus features. Fans of the film should find it a worthwhile upgrade over the previous Blu-ray release from MGM, and it's definitely worth consideration from anyone else.

Sale Price 20.96
List Price 39.95
Buy Now
3rd Party 28.58
In Stock.
See what people are saying about this story or others
See Comments in Forum
Previous Next
Pre-Orders
Tomorrow's latest releases