A timeless classic that has been loved for generations, BAMBI now joins the Walt Disney Signature Collection. In this life-changing adventure, Bambi sets off with his best friends Thumper and Flower to explore the wonders and challenges of the woods -- and fulfill his destiny as prince of the forest. Full of humor and heart, and featuring awe-inspiring animation, BAMBI remains a family favorite, ready to delight a whole new generation.|In striving for realism, the artists heard lectures from animal experts, made field trips to the Los Angeles Zoo, watched specially filmed nature footage shot in the forests of Maine, and even studied the movements of two fawns that were donated to the Studio.|"Fellas, this stuff is pure gold," Walt Disney told the animators. The story of the little deer coming of age has endured, and today, BAMBI is universally regarded as one of Walt Disney's most charming films.

It's always great to reconnect with a classic - even if it's a piece of children's entertainment. There was an artistry and sense of craftsmanship to early Disney films that I feel sets them apart from their sibling films that were produced later in the 80s and 90s, and feel entirely different than Disney's modern computer animated output. You can feel the thousands of man hours worth of work that went into crafting each and every frame. As an adult, looking at these old animated films, I'm not only hit by waves of nostalgia but a sense of awe at the beautiful images on the screen. Bambi: The Signature Collection is no exception. This is a gorgeous film and it was a lot of fun reconnecting with it. Living in the densely urban environment like Chicago as I currently do, this latest viewing of Bambi made me just want to pack my bags and head for home.

It has probably been the better part of thirty years since I'd last earnestly sat down to watch Bambi. I'd seen bits of pieces in passing through various home video releases or the previous Diamond Edition release, but I hadn't truly stopped to watch and appreciate what I was seeing on screen. I just wasn't motivated to. Bambi was never my favorite as a kid growing up. I liked it, I watched it many times on VHS, but The Sword in the Stone and Robin Hood always kept me rewinding the tape and hitting "play" for another viewing. But I always had an appreciation of Bambi. Growing up in wooded rural Michigan, I had to.

The house I grew up in was surrounded by a thick forest with any number of woodland critters roaming about. On any given morning I could see flocks of different birds in the trees, a fresh brood of bunnies eating my Mom's flowers, the occasional skunk, and very often I got to see a sizable herd of deer pass through the yard. So seeing a fresh spotted fawn was a regular occurrence for me as a kid and Bambi brings that familiar feeling of "home" to me. To that point, I was never upset or unnerved by the death of Bambi's mother. I grew up knowing hunters so that wasn't ever a thing for me. On the other hand, movies like Old Yeller and Where The Red Fern Grows absolutely gutted me as a kid. 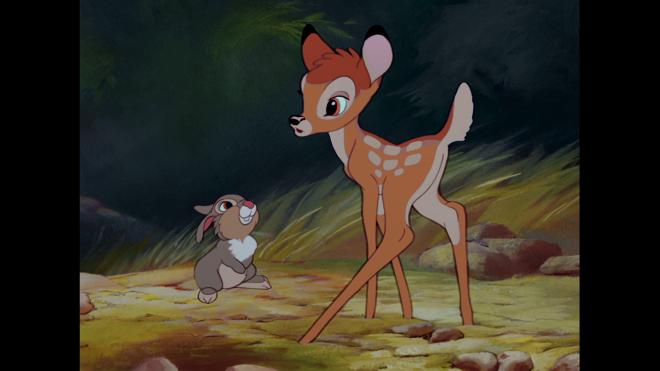 While the story of Bambi is fairly simplistic, the film runs more as an appreciation of the four seasons Spring, Summer, Fall, Winter, and back to Spring. Each of these vignettes shines a little light on the life and development of Bambi and his fellow woodland critters like his rabbit pal Thumper or the scent-conscious skunk Flower. I once heard a statistic about this film that through the course of its 70-minute runtime there are less than 1,000 words of dialogue. If that stat is true, I wouldn't be surprised. Unlike other Disney undertakings, Bambi feels like a film more interested in the beautiful imagery and letting that take center stage towards crafting the story rather than letting random conversations push things forward.

This latest viewing also made me appreciate the songs and the score by Frank Churchill and Edward H. Plumb. Unlike most animated fare released by Disney, the songs found within Bambi aren't sung by any of the characters. They're simply accent pieces to help establish the mood of the moment and they're beautiful. "Little April Shower" is probably my favorite number of the bunch.

What I possibly love the most about Bambi is that nearly 75 years after it's premier, it is still a heartwarming and endearing Film. Released in the summer of 1942 as WWII was ramping up, we're lucky to have this film at all. With the strain of financing and the lack of manpower available, Disney very nearly scrapped this production entirely. And since the film initially failed to win back its financing at the box office, there was some doubt about the survival of the studio. Thankfully this film managed to turn a profit through rereleases and Uncle Walt was able to return the studio to feature filmmaking with 1950's Cinderella. Bambi is a true classic in every sense of the word and I had a great time watching the film again and enjoying all the memories of home that it brought to mind. If it's been awhile since you've seen this gem, don't let anything keep you from taking an hour of your time in order to give Bambi another look.

Bambi: The Signature Collection arrives on Blu-ray courtesy of Walt Disney Home Entertainment in a two-disc Blu-ray + DVD + Digital HD set. Pressed onto a Region Free BD-50 disc, the disc is housed in in a standard, sturdy two-disc Blu-ray case with identical slip cover artwork. The Blu-ray loads to previews for upcoming Disney releases, but the menu structure allows viewers to skip directly to the animated main menu that features traditional navigation options. A collectible Tryus Wong art card is also included with this release.

For those who previously purchased the Diamond Edition release of Bambi, you can probably keep your wallets in your pockets. Those who missed that previous release and are reluctant to jump on the gray-market prices, the good news is that this 1.33:1 1080p transfer for The Signature Collection is the exact same one. After doing a quick spot check with a friend's copy, there isn't any discernible difference. Which is fine because the previous release remains a gorgeous looking transfer. It's a beautiful presentation that survives strict image scrutiny. The restoration team had gone above and beyond with their work as there is nary a scratch or ounce of speckling visible. Colors are bright and bold with thick lush earth tones and beautifully vivid primaries. Details are incredible - especially when looking at the unique background artwork. Free of any sort of compression artifacts, this transfer remains flawless.

As is the case with the video transfer, Bambi: The Signature Collection offers up the exact same English DTS-HDHR 7.1 audio mix. As there is little dialogue and much of the action hinges on music motivations and cues, there really isn't all that much surround activity. Rears experience little-to-no notable activity while sides see some moments during more action-heavy dramatic moments like the climactic forest fire. For the most part, though, this is a front/center channel affair amicably taking care of the heavy lifting of the dialogue and the music elements. Again during the climax and the dear fight scene, there are some terrific LFE tones echoing through to give that ominous sense of danger. It's a strong mix, and I don't have any complaints about it what so ever. Without a lossless track to compare it to this mix is still a great package that plays up the film's auditory strengths.

Thankfully this release isn't a complete rehash of previously released material as Disney has dug up a few more noteworthy new bonus features for fans to paw through while also providing the content from the previous release. What's here isn't all that extensive, but it's all solid material that's worth viewing. For a breakdown of the previous release content, take a look at our review of Bambi: Diamond Edition.

Every home should have a copy of Bambi it. It's a true classic in every sense of the word offering up a magnificent story along with some of the most beautiful animation work to come from the Mouse House. As far as this Signature Collection release goes - if you already purchased the previous release, the new bonus features content isn't quite enough of an incentive for a double dip unless you're a die-hard completionist. Considering this release sports the exact same video transfer and audio mix along with a couple of decent new bonus feature additions, those who haven't taken the Blu-ray plunge for this title, Bambi: The Signature Collection is a highly recommended disc.

Sale Price 10.99
List Price 26.5
Buy Now
3rd Party 49.9
In Stock.
See what people are saying about this story or others
See Comments in Forum
Previous Next
Pre-Orders
Tomorrow's latest releases