“You’ll Never Get Rich delivers us real movie stars that seem capable of holding the universe together with their talent and attractiveness…when the stars start dancing to the Cole Porter tunes, the film takes wings.”
– Glenn Erickson, DVDTalk.com

“Script is studded with humorous lines and situations…all sufficiently refurbished by Sidney Lanfield’s direction to get over in good style. Lanfield keeps things moving consistently, and the song and dance routines are neatly spotted.”
– Variety

The first collaboration between two great musical stars, Fred Astaire and Rita Hayworth, You’ll Never Get Rich (1941) is part show-biz tale, part wartime comedy, with Astaire a Broadway denizen jonesing for dancer Hayworth. Tripped up by the depredations of his womanizing boss (Robert Benchley), our hero then winds up drafted – but potentially reunited with his sweetie when he’s enlisted to put on a camp show. Featuring a score by the inimitable Cole Porter, including hit tunes “Since I Kissed My Baby Goodbye” and “So Near and Yet So Far.”

Very few dancers can steal the focus from Fred Astaire, but the oh-so-lovely Rita Hayworth is one of them, and in You'll Never Get Rich she does so effortlessly. When the two share the screen, Hayworth's ethereal glamour and grace overpower the lanky Astaire, and Hollywood's greatest male dancer fades into the background like a chorus boy. Okay, maybe I'm exaggerating, but with her million-dollar smile, flowing auburn tresses, svelte figure, gorgeous gams, and impeccable musical sense, Hayworth floats across the dance floor like a celestial angel, melting hearts while raising blood pressure. Just try and take your eyes off of her. It's no wonder she earned the nickname The Love Goddess.

And it's no wonder she eclipses Astaire in their two films together. While Astaire whirled a dizzying array of top female dancers across innumerable parquet floors over the course of his long career — Ginger Rogers and Cyd Charisse chief among them — none of his partners could rival Hayworth's style, ease, and beauty.

So it's a real shame You'll Never Get Rich, their first joint outing, only lives up to its potential when Astaire and Hayworth dance, which in this case isn't nearly often enough. An electrifying, but criminally brief, tap duet whets our appetite a few minutes into the film, but then we're forced to wait 53 interminable minutes before Fred and Rita take to the floor again. (For a while, I actually wondered if they ever would.) Yes, the wait is worth it - and their final number almost a half hour later is equally captivating - but three dances just aren't enough, especially when the rest of the film struggles to find its footing.

You'll Never Get Rich is noteworthy because it proved Astaire could dance successfully with someone other than Ginger Rogers (the movie was released just two years after their legendary partnership dissolved) and it catapulted Hayworth into the realm of major stardom. Yet despite the talents of its two leads, a Cole Porter score, and a solid supporting cast led by the hysterically funny Robert Benchley, You'll Never Get Rich is little more than a silly exercise in pre-World War II propaganda, and a musical in which the music is given embarrassingly short shrift.

Mounted during Astaire's "transition period" — a five-year stretch of freelancing between his Ginger Rogers days at RKO and his renaissance at MGM — You'll Never Get Rich was made at Columbia, and although director Sidney Lanfield tries his best to mask the studio's poverty row reputation, the film's shoestring budget and utilitarian production values are all too apparent, especially during the musical numbers. A far cry from the art deco grandeur of RKO and MGM's Technicolor gloss, the sparse backdrops and minimalist musical sequences give You'll Never Get Rich a thrown-together feel and make Astaire look like he's slumming. Hayworth supplies some much-needed class, but the dated, contrived script swallows them both.

Astaire portrays Broadway director Robert Curtis, who must cover for his philandering producer, Martin Cortland (Benchley), when Cortland's wife Julia (Frieda Inescort) discovers a diamond bracelet meant for chorus girl Sheila Winthrop (Hayworth). Robert agrees to date Sheila to throw Julia off the scent, but when complications multiply, he enlists in the army as a means of escape. Of course, by now he's smitten with Sheila, so when Cortland brings his show to the training camp to entertain the troops, Robert risks incarceration by impersonating a captain to win her affections.

Although Astaire spends most of the film in skivvies and guard house fatigues, he still finds an opportunity to don top hat and tails as he dances the lilting, Spanish-tinged "So Near and Yet So Far" with Hayworth. Shot in just two takes, the lengthy, elegant sequence showcases the stars' chemistry and complementary dance skills. Unfortunately, Astaire's other numbers find the dancer saddled with uninspired moves (especially in a subpar solo turn) and so overwhelmed by chorus girls he's almost swallowed up by all the traffic. Lanfield and choreographer Robert Alton should have realized such superfluous trimmings diffuse Astaire's magic; that fine music and an occasional partner are the only materials Astaire needs to weave enchantment.

Cole Porter's weak score doesn't help (he reportedly struggled to write music to fit the military theme), nor does Columbia's shoddy treatment of it. Many songs receive only a throwaway instrumental rendition, while others are hampered by drab presentations and truncated readings. As a result, You'll Never Get Rich seems less like a true musical than a lowbrow army comedy with songs. (Only four numbers feature vocals — an abysmally low number for a Hollywood musical — and just two of those are performed by Astaire, hardly giving the dancer's fans their money's worth.) One can only imagine what a more artistic outfit like MGM's Arthur Freed Unit could have done with You'll Never Get Rich. Columbia's chintzy production merely proves stars like Astaire and Hayworth can brighten a second-rate musical, but they can't save it. 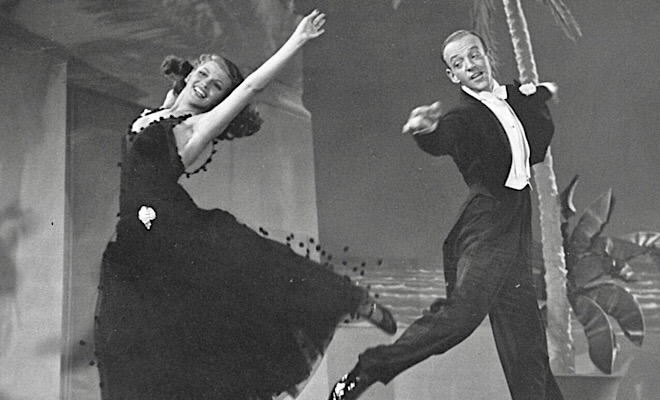 You'll Never Get Rich arrives on Blu-ray in a limited to 3,000 edition packaged in a standard case. An eight-page booklet featuring an essay by film writer Julie Kirgo, a few black-and-white scene stills, and a color reproduction of the movie's poster art is tucked inside the front cover. Video codec is 1080p/AVC MPEG-4 and audio is DTS-HD Master Audio 1.0. Once the disc is inserted into the player, the static menu without music immediately pops up; no previews or promos precede it.

The DVD transfer of You'll Never Get Rich was a monumental travesty marred by scratches, an overabundance of grain, and a blizzard of white spots.

Thankfully, the film has been meticulously remastered and all those nagging issues have been resolved. The resulting 1080p/AVC MPEG-4 transfer from Twilight Time may not be perfect, but it's a night-and-day improvement, featuring excellent contrast and clarity and a nicely varied gray scale that helps enhance detail levels. Grain is still evident, but it's less intrusive and lends the image a lovely film-like feel. Black levels are lush (the tone of Astaire's tuxedo and Hayworth's gown during the "So Near and Yet So Far" number is especially dense) and sharp close-ups showcase Hayworth's breathtaking beauty. A few stray marks still dot the print, but can't diminish the impact of this sterling presentation. If you're a fan of this movie, you'll definitely want to upgrade.

The DTS-HD Master Audio 1.0 track supplies clear, well-modulated sound. Some minor surface defects occasionally afflict the track, but most are deep in the background and require astute ears to detect. More egregious offenders like pops and crackles are absent, and a wide dynamic scale keeps distortion at bay. The tapping of Astaire and Hayworth is crisp and distinct, dialogue and song lyrics are always easy to comprehend, and solid fidelity enhances the music, which sounds suprisingly robust and fills the room with ease. For a 76-year-old film, You'll Never Get Rich sounds mighty fine, which is good news indeed for musicals fans.

Unfortunately, this Twilight Time disc, much like the 2003 Columbia DVD before it, doesn't offer much in the way of supplemental material.

Isolated Music and Effects Track - Enjoy Cole Porter's score, Astaire's vocals, and the toe-tapping of both Astaire and Hayworth on this isolated track.

Theatrical Trailer (HD, 4 minutes) - In his inimitable fashion, actor Robert Benchley introduces this lengthy trailer, which provides snippets from all the musical numbers.

An amusing but silly story and weak songs make You'll Never Get Rich a poor man's musical. Fred Astaire and Rita Hayworth dance divinely, but their magical moments together are far too few to salvage this dated, flag-waving confection. Though bereft of extras, Twilight Time's Blu-ray presentation features excellent video and audio transfers, both of which are a huge step up from the previous DVD. You'll Never Get Rich may disappoint diehard musical mavens, but fans of Fred and Rita will certainly want to grab this limited edition disc while it lasts. For Fans Only.