In the near future, Major (Scarlett Johansson) is the first of her kind: A human saved from a terrible crash, who is cyber-enhanced to be a perfect soldier devoted to stopping the world's most dangerous criminals. When terrorism reaches a new level that includes the ability to hack into people's minds and control them, Major is uniquely qualified to stop it. As she prepares to face a new enemy, Major discovers that she has been lied to: her life was not saved, it was stolen. She will stop at nothing to recover her past, find out who did this to her and stop them before they do it to others. Based on the internationally acclaimed Japanese Manga, "The Ghost in the Shell."

For a production that heavily borrows from the Japanese animated movie that inspired it, Rupert Sanders' Ghost in the Shell sure feels nothing remotely close to the original 1995 cult anime classic. In fact, Sanders so freely copies from Mamoru Oshii's vision of the popular manga series that it practically borders on plagiarizing — or if you prefer "pirating" since the story deals with the world of computer hacking. Every attempt at enjoying and analyzing this live-action remake is undermined by scenes that immediately remind hardened fans of the beloved series, admiring the far-superior version all the more. And frankly, it's a real shame because Sander's film is a visually stunning feast for the eyes and imagination. Set in a near future where people enhance themselves with a variety of cybernetic augmentations and advertisements have evolved into 3D holograms, some of which are the size of buildings, audiences are quickly mesmerized by the amazing stage production and the hard work of CG artists bringing it all to life. It's a bizarrely dystopian and nightmarish vision of humanity's love affair with technology which also feels surreal and beautiful.

Sadly, Sanders fails to really use any of these brilliantly impressive visuals to his advantage or to the benefit of a surprisingly mediocre and sophomoric plot. Much like the robotic characters featured in the film, the whole thing is a mere show without an ounce of substance to make it all worthwhile. It's a lovely, exterior shell to draw viewers in, but it doesn't take long to discover it lacks a "ghost," which is what they call the abstract notion of a "soul" or the "conscious self." Unless one considers intellectually pretentious questions about the self or what defines one as human as profound, the film never attempts a "deep dive" of its own premise or genuinely challenge viewers in any significant manner. Rather, Sanders and his team keep everything at surface level, preferring to brush off the deeper, underlining issues in favor of easily-digestible, supermarket wisdom. A laughable favorite comes from Dr. Ouelet (a bored, feigning emotion Juliette Binoche), the scientist largely responsible for mending the human brain with a robot body, blurting the pseudo-insight that her creation is defined by actions performed, not those pesky, glitchy memories. 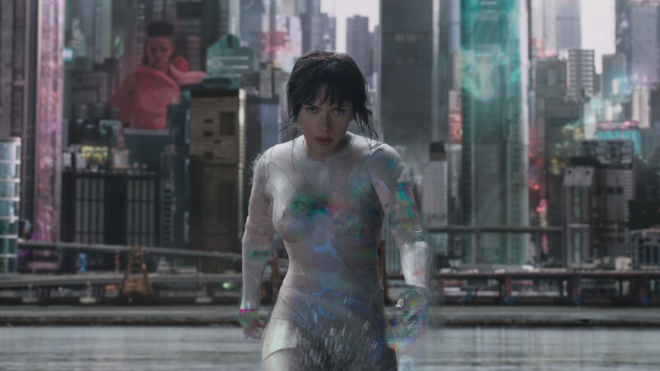 However, the entire plot practically hinges on our protagonist, Major Mira Killian (Scarlett Johansson), searching for her past and those supposed unimportant memories to better understand herself. It's almost as if the filmmakers are not even aware their heroine's actions seem to contradict their intentions — that's assuming they're aiming at some greater design and purpose beyond the pretty pictures. The original anime, considered a masterpiece of the sci-fi genre, is practically a philosophical treatise on Cartesian dualism and modern assumptions of autonomy when memories can be programmed and altered. Some of these ideas are touched upon in Sanders' film, most of which is brought on by cyber terrorist Kuze (Michael Carmen Pitt), but only as a trivialized, rudimentary device for moving the plot forward. Ultimately, any deeper considerations are abandoned for a more traditional, straightforward corporate thriller where it takes less than a minute to figure out the real villain, a character who practically walks around twisting a metaphorical mustache as they hatch a libertarian, robber-baron scheme, which never comes as either a surprise or a satisfying twist.

Admittedly, it may not be entirely fair to compare Ghost in the Shell to the anime, but Sanders makes it impossible not to when blatantly copying from the original 1995 cult classic. And frankly, there are some positives to be enjoyed in this live-action version, with the stunning visuals being a huge highlight. Except for new additions Cutter, Kuze and Ouelet, three characters are remarkably and even spookily much like their anime counterparts. Pilou Asbæk is outstanding as Batou, especially the moment he receives his cybernetic eyes, while Chief Daisuke Aramaki could not have been played better than legendary actor "Beat" Takeshi Kitano. Personally, Johansson was an excellent choice for Major, carrying out many of her mannerisms and steely, dead-eye stares with incredible authenticity. It's almost as though her role in Under the Skin and Lucy were just building towards this cold, mechanical performance. Of course, any praise for the visuals and a few of the performances are essentially a fruitless attempt at polishing a turd that already thinks itself a gem, or better yet, an artificial shell transporting stimulating notions of the soul. Unfortunately, it only proves itself to be a hollow, vacant body programmed by its corporate overlords.

Paramount Home Entertainment brings Ghost in the Shell to Blu-ray as a two-disc combo pack with a flyer for an UltraViolet Digital Copy. The Region Free, BD50 disc is housed inside a blue eco-vortex case with a DVD-9 on the opposing panel and a glossy slipcover. After a few skippable trailers, viewers are taken to an interactive menu screen with full-motion clips and music playing in the background.

The live-action remake questions humanity on Blu-ray with a spectacularly beautiful 1080p/AVC MPEG-4 encode that bursts with color in the first few minutes. Aerial shots of the city skyline parades a dazzling exhibition of neon pastels in the 3D holograms adverts, and when walking through the busy city streets, a vibrant palette of softer hues energize the screen. Adding a layer of irony to this dystopic vision of the future is a sumptuous, richly-saturated display of primaries, particularly the red in the artificial blood and muscles of Major while the rest of Jess Hall's photography comes with a noticeable metallic blue polish.

Even though the cinematography is heavily stylized with a deliberately restrained contrast, whites remain clean and accurate with a pitch-perfect brilliance throughout, providing several sequences and buildings with a strange, dreamlike glow. Much of the film, which was shot digitally on the Arri Alexa 65 camera system, comes with an intentional soft-focus haze, further adding to the picture's visually arresting quality. In spite of that, definition and resolution are extraordinary, exposing the tiniest blemish and imperfections along the walls, much of the clothing and in some of the augmented features of people. Fine lines are razor-sharp with superb detailing of the individual robotic parts, and lettering is plainly legible at all times, even from a distance. Although a few poorly-lit sequences are a bit drab and murky, black levels, overall, are inky rich with dark, opulent shadows penetrating deep into the screen, providing the 1.85:1 image with a welcomed three-dimensional quality and a lovely cinematic appeal.

Further complimenting the amazing visuals is an equally fantastic and continuously active Dolby Atmos soundtrack that utilizes the object-based codec in some interesting ways. Although it can be aggressive at times, particularly in the big, climactic showdown, the overall design is really more subtle and understated. Since much of the movie tries to be dialogue and character driven, much of the Foley attention is placed on the noises heard as part of daily living. These include the crazy amount of holographic ads floating to the sides and overhead, the echo of city traffic ringing all around, the numerous voices of people walking everyone and the occasional noise of flying contraptions going through the sky. When action erupts on screen, bullets whiz in every direction, the echo of gunfire fills the room and debris from explosions shower the entire listening area.

In the front soundstage, those same sequences are practically endless, employing all three channels from beginning to end and displaying excellent balance with flawless panning. With convincing off-screen background activity that also moves into the front heights for a satisfying half-dome wall of sound, imaging feels expansive with superb clarity detailing in the mid-range, generating an outstanding sense of space and presence. Even at whisper levels and during the loudest segments, vocals remain precise and well-prioritized. A robust and responsive low-end provides the action and music with a palpable weight. A couple sequences, especially the fight against the "spider tank," come with a fun, wall-rattling resonance, occasionally digging as low as 22Hz in a few spots (bass chart).

Section 9: Cyber Defenders (HD, 12 min): A look at the characters, individual personalities and the various cybernetic enhancements featured in the film.

Man & Machine: The Ghost Philosophy (HD, 11 min): An intriguing discussion of the themes explored in the original film and the manga, along with the practicality of making the science a reality.

For a production that heavily borrows from the Japanese animated movie that inspired it, Rupert Sanders' Ghost in the Shell sure feels nothing remotely close to the original 1995 cult anime classic, failing to ever really explore any of the questions brought up by the plot or bring anything new to the discussion. Aside from any praise for the visuals and a few of the performances, the production only proves itself to be a hollow, vacant body programmed by its corporate overlords. The Blu-ray, on the other hand, arrives with a gorgeous, demo-worthy audio and video presentation that fans will gladly gush over, and the disappointingly small selection of supplements are, at least, mildly interesting. Nevertheless, the overall package is worth a look for the curious and recommended for those who actually enjoyed the movie.

Sale Price 9.99
Buy Now
3rd Party 10.89
In Stock.
See what people are saying about this story or others
See Comments in Forum
Previous Next
Pre-Orders
Tomorrow's latest releases