How to Succeed in Business Without Really Trying

How to Succeed in Business Without Really Trying has been a perennial Broadway favorite for decades. The story of a mild-mannered yet cunningly ambitious window-washer who swiftly rises through the corporate ranks by following step-by-step instructions in a self-help book continually captivates audiences with its sharp wit, relatable satire, sly cynicism, and exhilarating score. The original production, with music and lyrics by Frank Loesser and a book by Abe Burrows (the same team that brought the world the immortal Guys and Dolls), opened in 1961 and ran for a whopping 1,417 performances. (It also won seven 1962 Tony Awards, including Best Musical, as well as the Pulitzer Prize for drama - one of only a handful of musicals ever to be so honored.) A 1995 revival starring Matthew Broderick ran for 548 performances, while a 2011 revival with Daniel Radcliffe (which I was privileged to see and thoroughly enjoyed) closed after 473 performances.

Not surprisingly, a film adaptation soon followed the original production's blockbuster success. Director-writer-producer David Swift wisely imported several members of the New York cast, including Tony Award-winner Robert Morse, Rudy Vallee, and Michelle Lee, but the 1967 movie, though energetic and entertaining, lacks the sparks - and many of the songs - that make How to Succeed such a dynamite show on stage. Location shooting in the Big Apple helps open up the story, but the authentic backdrops only add flavor, not substance.

When J. Pierrepont Finch (Morse) happens by a New York newsstand and picks up a copy of How to Succeed in Business Without Really Trying, he has no idea the slim volume will so completely change his life. Stuck in a dead-end job as a window washer, Finch has big dreams and insatiable ambition, and he soaks up all of the book's easy-to-follow advice like a sponge. He sets his sights on the World Wide Wicket Company (which uses the prophetic acronym W.W.W.), and on his way to apply for a job, he literally bumps into the corporation's president, Jasper B. Biggley (Vallee), an eccentric, bespectacled executive who shuttles him off to the personnel department. Finch wisely drops Biggley's name to snag an interview and instantly lands a job in the mailroom where he competes for attention with Biggley's stuck-up, condescending nephew, Bud Frump (Anthony Teague).

Yet Finch doesn't stay in Bud's shadow - or the mailroom - for long. Proving the adage "flattery will get you anywhere," Finch systematically brown-noses his way up the corporate ladder with astonishing alacrity, employing elaborate ruses and a few Machiavellian manipulations along the way, and earning the enmity of Bud, who can't understand his rival's rapid rise. All of this deeply impresses Rosemary Pilkington (Lee), a sweet company secretary who continually champions Finch's potential without knowing his dirty secrets. Rosemary and Finch begin a romance, but all the madcap corporate entanglements and skullduggery soon catch up with Finch and threaten to expose him as a fraud, which in turn will almost certainly knock him off the pedestal the starry-eyed Rosemary has placed him upon.

On the journey from stage to screen, most musicals chuck a couple of songs and add some new ones to freshen up the material, entice audiences into the theater, and maybe snag a Best Song Oscar nomination. How to Succeed travels that well-worn road…to an extent, deleting several numbers, but not adding any to take their place. The result is a musical that's somewhat lacking in the singular element that defines it - SONGS! Yes, the show's two signature numbers - "I Believe in You" and "The Brotherhood of Man" - survive intact and are worth the price of admission (though the tone and placement of "I Believe in You" are somewhat altered), but long stretches of How to Succeed are devoid of music…so much so, it's sometimes tough to remember it's a musical.

Swift, who is best known for directing the Hayley Mills classics The Parent Trap and Pollyanna, obviously reveres the material, and his breezy approach serves it well. The colorful sets and costumes epitomize the psychedelic 1960s (as does the sexist office atmosphere) and the recycled Bob Fosse choreography and jazzy Nelson Riddle musical arrangements provide sporadic jolts of electricity when we need them most.

The performances are good, too. Morse is a delight as Finch. Alternately nerdy, conniving, impressionable, and befuddled, he grabs our attention whenever he's on screen, while Vallee, who crooned his way to stardom in the 1920s, is wonderfully stuffy and arrogant as Biggley. Many of us only know Michelle Lee as the weepy heroine on the long-running primetime soap Knot's Landing, but she's the epitome of effervescence here. And can she sing! Sadly, both of Rosemary's solo numbers from the show were cut, so "I Believe in You" was given to Lee instead and retooled as a ballad. (Morse reprises it later on.) She sings the hell out of it, and it's a shame she doesn't get more chances to show off her potent pipes.

The film version of How to Succeed in Business Without Really Trying will never eclipse its stage counterpart, but remains a faithful adaptation, despite its emphasis on plot over music. Workplace politics and the ever-changing corporate climate touch the lives of almost every American, and this whimsical yet deceptively incisive musical pointedly skewers both. A fun romp with several terrific tunes, How to Succeed most definitely succeeds; it's just not as memorable as fans of the genre might like. 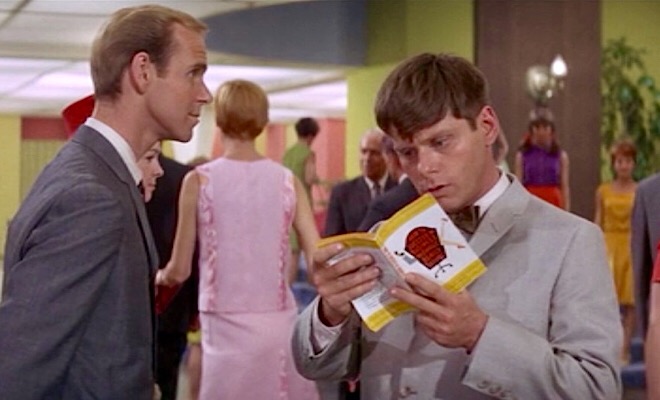 'How to Succeed in Business Without Really Trying' arrives on Blu-ray in a limited to 3,000 edition packaged in a standard case. An eight-page booklet featuring liner notes by essayist Julie Kirgo, full-color scene stills, and a reproduction of the film's poster art is tucked inside the front cover. Video codec is 1080p/AVC MPEG-4 and the default audio is DTS-HD Master Audio 5.1. (A DTS-HD Master Audio 2.0 mono track is also included.) Once the disc is inserted into the player, the static menu without music immediately pops up; no previews or promos precede it.

Many mid-1960s movies suffer from a bit of fading, and sadly, How to Succeed is no exception. Still, this 1080p/AVC MPEG-4 rendering from Twilight Time has much to recommend it. Though contrast is occasionally somewhat muted (due to the fading), excellent clarity and a widely varied color palette add welcome vibrancy to the picture. Almost every shade of the rainbow is represented in the film, and all of the hues - from bold primaries to creamy pastels - are beautifully saturated. Faint grain preserves the celluloid look, and deep blacks, crisp whites, and natural flesh tones add balance to the image.  A few specks here and there dot the print, but rarely distract, and no digital issues or enhancements could be detected. Considering How to Succeed was not produced by a major studio, it has weathered the years quite well, and this fine transfer should certainly please the film's fans.

Both DTS-HD Master Audio 5.1 and DTS-HD Master Audio 2.0 mono tracks are included, and both provide clear, well-modulated sound. Surround activity on the multi-channel mix is practically non-existent, but the musical numbers benefit from superior fidelity that helps them achieve a more enveloping presence. Some noticeable stereo separation across the front speakers nicely widens the soundscape, and a wide dynamic scale handles all the brassy highs and weighty percussion of Nelson Riddle's wonderful arrangements with ease. All the dialogue and song lyrics are easy to comprehend, and no distortion or age-related hiss, pops, or crackles intrude. Sprightly, full-bodied audio is the order of the day here, and that's just what you want from a musical soundtrack.

A couple of brand new supplements enhance the appeal of this limited edition Blu-ray release.

Featurette: "The Book Is All That You Need: Robert Morse on J. Pierrepont Finch" (HD, 19 minutes) - The irrepressible star of How to Succeed recalls how he broke into show business, compares the stage musical to its film adaptation, points out a cameo by director David Swift, shares some entertaining anecdotes (the best of which involves Bob Fosse and Gwen Verdon), and even sings a few bars from some of the show's songs in this entertaining interview.

Featurette: "A Secretary Is Not a Toy: Michelle Lee on Rosemary Pilkington" (HD, 16 minutes) - Lee also sings a bit in her interview, in which she talks about the impact of the assassination of President John F. Kennedy on a particular performance of How to Succeed on Broadway, the film's cult following, and the decision by Swift to shoot the movie version in a straightforward, "proscenium" manner. Lee also notes she wasn't asked to audition for the film, and describes how the ballad version of "I Believe in You" evolved. Vivacious and still looking great in her mid 70s, Lee can hardly contain her enthusiasm for How to Succeed, and her bubbly personality makes this piece especially enjoyable.

Theatrical Trailer (HD, 3 minutes) - The original preview for How to Succeed advises viewers to "see it before your boss does."

How to Succeed in Business Without Really Trying is a terrific stage musical, and though vivacity, charm, color, and plenty of talent pervade the film version, director David Swift's adaptation never quite takes off like we hope and expect it will. Robert Morse and Michelle Lee are delightful as the upwardly mobile corporate ass-kisser and his adoring girlfriend, and Frank Loesser's score includes two dynamite numbers, but too much plot keeps this musical grounded too much of the time. Strong video and audio transfers and a couple of fine supplements distinguish Twilight Time's Blu-ray presentation of this venerable musical, which is certainly Worth a Look for Broadway fans and those who enjoy good old-fashioned escapist entertainment.