Buckle up for thrilling edge-of-your-seat action and laugh-out-loud fun in Disney’s G-Force as this elite team of highly trained guinea pigs leaps off the screen and right into your living room. In Disney Blu-ray 3D, this family comedy adventure is the best 3D you can get at home.

Just as the G-Force is about to save the world, the F.B.I. shuts the secret unit down. But these next-generation action heroes won’t be stopped. Armed with the latest high-tech spy equipment, and with the F.B.I. on their tails, the fur flies as they race against the clock to save the world. From the producer of Pirates Of The Caribbean and National Treasure, G-Force is fantastic 3D fun for the whole family. It’s Magic In A New Dimension.

I was recently able to take my four year-old niece with me to a pre-screening of 'Princess and the Frog.' My wife went out to get her some popcorn and the kids popcorn holders where emblazoned with the "stars" of 'G-Force.' Without saying a word, my niece looked at the pictures and just giggled.

What is it with kids, and their love of talking animal crap? I have no clue as to why a movie like 'G-Force,' with computer animated guinea pigs as super spies would appeal to anyone at all. Alas, kids love it and there's nothing anyone can do about it.

A top-secret government organization has figured out a way to translate animal voices so humans can understand. Although these translators seem to come in English-only versions, they are capable of presenting a cool and sexy (let us never remember that I used the adjective "sexy" to describe a guinea pig) Latina accent for the aptly named Juarez. Let's not delve too much into the language and accent discrepancies because essentially they are there so Penelope Cruz can be a voice.

I'm excited for the day when studios realize that kids couldn't care less who is voicing a movie, and parents have become far too cynical to accept a film just because a bunch of big names are providing the dialogue. Here we have names like Nicolas Cage, Sam Rockwell, Jon Favreau, Steve Buscemi, and Tracy Morgan; but all the kids really care about is if there's enough fart jokes to go around.

On the topic of fart jokes, there are enough to go around. While Disney can put out some great, heartfelt films, it can also let loose some stinkers designed for the sole purpose of appealing to the masses. 'G-Force' is one such film.

I haven't really discussed the plot to the movie, because there isn't much of one to discuss. The G-Force team is about out of money and is in danger of being cut off from federal funding altogether. When they botch a top-secret job that the Bureau has been working on for years it spells the end for the project. Unless, they can redeem themselves by fixing everything they ruined.

The film takes all the usual twists and turns that you would expect. Even the "surprise" ending less of a surprise, and more of a "yeah, saw that one coming."

In the end though, I think kids will love it. There's enough action to keep them entertained, enough potty humor to make them laugh, and enough bright lights and flashing things to keep their attention so their parents can do whatever parents do when their children are entranced by TV. It's a fine film for children to watch. Parents shouldn't be worried about any hidden content that shouldn't be in there. It's a dumb little comedy, but your kids will eat it up. Enough said.

'G-Force' has seen a few Blu-ray releases in 2D, but it now comes to Blu-ray 3D for the first time, in a three disc combo set. The Digital Copy from the initial release is excised, as we are left with BD50, Region A/B/C discs in 2D and 3D, as well as a DVD copy. There are no extras on the 3D disc, which is pretty commonplace these days. The set is packaged in a standard thickness case, with a lenticular slipcover. 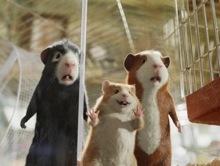 'G-Force' is, hands down, the best looking title in the 3D rerelease wave that it's a part of. Color me shocked. I didn't expect the video quality to be as uninspired and generic as the film itself, but I also didn't expect to be wowed on many occasions, with a handful of nifty 3D tricks that really set this disc apart.

'G-Force' opens in a bad spot, as the entire opening segment is the worst in the entire disc, as the nighttime mission with the original three guinea pigs and their fly, mole, and human companions really doesn't have much in terms if discernibility. There's a lowered level of detail compared to the rest of the film. There are also a few shots featuring a flurry of aliasing jaggies, on top of the low shadow detail, but even through it, the white guinea pig hairs are perfectly clear, crisp, and perfectly colored, not afflicted by the crush around them. Ghosting pops up a few times here, and is actually the most we see the malady throughout the entire disc. Even through all this, though, the displays in the Saberling display are amazing, especially when the satellite links them all through the room.

From here on out, the disc is demo material, and when I say demo, I mean innovative, original, unique, and fantastic! Ghosting pops up on a very random shot here and there, like the attempted snake bite/lunge, but is always minor and very, very few and far between in terms of consistency. Details are phenomenal, with constant hair distinction, especially with the constant close up shots this film features, and there's never any issues with aliasing guinea pig hairs (or other animals). In fact, there's a ton of pop in the hair, from the mole's random odd fuzz to even human beard and stray hair.

The depth of this disc isn't all that great, though there are some fantastically deep exterior shots in the day shots when the group gets separated. There is a constant added layer, and even the most mundane of shots have a great amount of effect. Heck, the mundane shots look deeper than a lot of exterior moments due to how pronounced the 3D is. Deepest layers maintain visual quality, with no blurring.

The real kicker to this disc is the pop out effect, as 'G-Force' in 3D takes the idea quite literally. From the opening grappling hooks coming at you, you know there's going to be a lot of effects that come out at you, but then something magic happens. This 2.40:1 framed film breaks the boundaries of its aspect ratio, constantly. From the parachuting pigs, to the "blue flame" gag, and especially the broken glass when the guinea pig ball vehicle makes its debut (and a few other hidden neat moments), there's a really innovative, fun feature that looks absolutely amazing in 3D, with the front most layer maintaining perfect clarity, the animals and effects quite literally jumping out of the picture.

In terms of demo material, the end of the FBI vs guinea pig ball chase has to be one of the top five demo worthy moments in Blu-ray 3D, period. The way the fireworks layer, both deep and forward, along with the moving guinea pig balls, the color and clarity and pop this sequence floored me. It's beyond impressive.

This disc has some problems in the opening dark sequence (the finale, which is also dark, does not feature the same problems), but from then on, it's almost perfect. Sure, this isn't the deepest 3D film, but the amount of added window depth to almost every sequence is most definitely noticeable. A stunner. A real stunner. 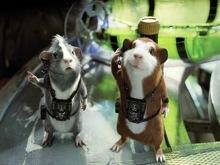 The DTS-HD Master Audio 5.1 audio presentation accompanying 'G-Force' is exactly what it has to be, and not much more. It cleanly presents a rumbling good romp of a kid's action movie with clarity. LFE is present, but it isn't overwhelming, even during car crashes and robot attacks. Kids don't need thumping bass to enjoy a movie. Panning effects like motorized guinea pig balls (that doesn't sound right at all) zoom on and off screen trying to evade the special agents chasing them. Dialogue is very clear and will be easy for the children to hear and pay attention to. The surrounds are fairly busy with ambient sound such as scurrying cockroaches and marauding household appliances out for revenge. 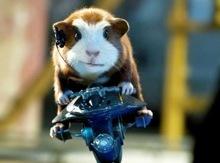 'G-Force' isn't the best film out there. In fact, it's amazingly slow for how short it is, and there isn't any reason to really connect with or care for any of the characters, and the conflict/plot is about as one dimensional as its protagonists. That said, the 3D release is really quite effective, and has a number of really neat effects. This set comes recommended, but damn if it isn't a bit overpriced for what you get. With no rebate for previous disc owners, and a high MSRP, and no possible way to get the 3D disc only, it's somewhat exorbitant. Look for a sale or a deal, and snatch it up as soon as you can at a reasonable price.

Sale Price 60.39
Buy Now
3rd Party 60.38
In Stock.
See what people are saying about this story or others
See Comments in Forum
Previous Next
Pre-Orders
Tomorrow's latest releases