Brace yourself for an eye-popping new dimension of imagination and surprises when Disney’s fun-filled family adventure blasts off the screen and touches down in your living room. Get ready to MEET THE ROBINSONS – in amazing Disney 3D!

Join Lewis, a brilliant young inventor who sets off on a time-traveling quest to save the future and find the family he never knew. With the help of the wonderfully wacky Robinson family, Lewis learns to keep moving forward and never stop believing in himself.

Earlier this year I trekked to the mall with my toddler in tow so he could experience his first flick in the theater. The movie was Disney's 'Meet the Robinsons' -- a CGI-animated film that was not produced by the Pixar folks. Even armed to the teeth with a variety of snacks, a handful of toys, and plenty of napkins, I fully expected my son to make it all of twenty minutes. To my great surprise, however, his little wide eyes remained transfixed on the screen throughout.

'Meet the Robinsons' is an old fashioned family film that tells the story of an orphan named Lewis (voiced by Daniel Hansen) who just so happens to be a brilliant inventor. After scaring off yet another set of potential adoptive parents, he's convinced he'll never find a family that accepts him. But that all changes when he meets a mysterious boy named Wilbur Robinson (Wesley Singerman) who whisks Lewis away to the future in a stolen time machine. Lewis meets Wilbur's family and instantly feels at home for the first time in his life, but it soon becomes clear that he can't stay in the future. With a villain called the Bowler Hat Guy (Stephen Anderson) in hot pursuit, Lewis and Wilbur will have to thwart the madman's evil plan of altering the time stream and find a way to get Lewis home again.

Kids will adore 'Meet the Robinsons.' Where else can you find a cohesive story that combines spaceships, dinosaurs, robots, crazy inventions, wacky characters, singing frogs, and an assortment of other bells and whistles? There's a comfortable consistency to the chaos and plenty of eye candy to keep children engrossed from beginning to end.

Adults will have a good time as well. 'Meet the Robinsons' may not be as consistently entertaining as Pixar masterpieces like 'Toy Story' or 'The Incredibles,' but it doesn't ignore its older audience either. First time director Stephen Anderson includes plenty of psychological humor, several nods to a variety of heavier films (including '2001: A Space Odyssey'), and a series of clever parodies including one that features the singing frogs and their "true nature." Hilarious.

Of course, like most films in its brethren, there's some subtext to the story as well, as lurking beneath the surface of the shiny futuristic setting is a dark tale of loneliness and self-worth. I wasn't sure how my son would handle the concepts of orphanages, abandonment, or revenge, but Lewis is such an endearing character that it never feels abusive or unnecessary. As an adult, I appreciated the stark examination of these themes and never felt as if the film pandered to its younger viewers -- in fact, it's somewhat surprising that the filmmakers didn't sugarcoat these darker elements. Parents should be prepared to field some important questions after younger kids watch this one.

The few occasions where 'Meet the Robinsons' falters can be attributed to the difficulties of attempting to consistently engage its dual audience. The less fantastical set-up of the first half hour risks losing the youngest viewers, while the second half hour will have adults impatiently waiting for the plot to move along. These lulls are never bad enough to ruin the experience, but they do keep 'Meet the Robinsons' from achieving the serene perfection of the best animated films.

Overall, despite these stumbles, 'Meet the Robinsons' is an impressive effort from Disney that shows the animation studio still has plenty of fire in its belly. I hope 'Meet the Robinsons' proves to be a sign of things to come, rather than a fluke that simply followed the Pixar formula to success.

'Meet the Robinsons' was released on Blu-ray in 2007, in 2D (obviously). Four years later, it arrives on Blu-ray again, this time in a Blu-ray 3D + Blu-ray 2D + DVD combo package, complete with DMR points and a lenticular slipcover. The 3D disc has no pre-menu garbage, while the 2D disc does. There is a slight aspect ratio change between the 3D and 2D editions of 'Meet the Robinsons,' with the 3D being 1.85:1, and the 2D being 1.78:1. Additionally, there is a change in audio formats on this disc from the original 2007 release. Like all other Disney releases, the 3D disc will not play in 2D, and is a BD50.

The 2D disc is different from its original release. For starters, it's no longer Region A locked. Other than that, it has different pre-menu trailers. The supplements are all there, the same, and the audio is still Linear PCM. 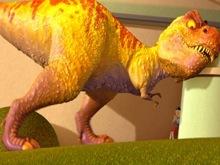 The transfer for 'Meet the Robinsons' in 3D is... well, it fares better than 'Chicken Little - 3D.' In fact, in the opening half to two thirds of the film, it's dynamite. Almost on par with the best Disney 3D titles. Then the third act happens, the proverbial stuff hits the fan, and we're left with a Blu-ray 3D release that's still pretty darned solid.

The added dimensionality in 'Meet the Robinsons' is great. Really. There's a lot of stand out moments, eye catching, superb shots and sequences that in 3D really make you think the film was made yesterday, with these shots in mind. It's actually really awesome how this worked out. There isn't an abundance of depth, but there is that constant window and dimensionality, that little bit of extension that works really well, and there are even a few moments that come out at the screen for added effect. I really think the men and women in charge of this one couldn't have made a better situation for a 3D conversion.

The pipes on the roof of the orphanage move through layers, as does the eventual cable in the invention pitch sequence from the man in the bowler hat, permeating every layer perfectly, coming at you like you were there in the scene. It's just too awesome. Through in superb textures, fantastic distinction in hair, solid colors, great lighting and no lost information whatsoever, and this is a 3D winner. The film constantly has something going on, be it the random layering of mundane shots (like the tiered college classroom, or the brain research montage), or the pop out effects in the peanut butter and jelly explosions. The fake grain in the food fight segment doesn't impede the added dimensionality, either. The fireworks segment? Wow.

There is a very minor hint of aliasing in the overhead shots of the science fair, but at the same time, the science fair shots have some of the best depth in the entire film, so you win some, you lose some. Ghosting, for the most part, is very light and sporadic, with some very prolonged sequences of not a single ghost in sight, but by the end of the film, you can't escape the random misfires, as they add up and invade scenes, particularly in the red lights of the bowler hats. It's a bit frustrating. The tubes in the future house are also a major mess, as they look twice as wide as they should be.

This Blu-ray 3D release can be, at times, great, great viewing material, and makes for a solid catalog title to flesh out a collection. It does lose its steam by the end and just tries to finish it and go home, with a noticeable amount of failure or moments that seem to lack in effort. This title started out so strong it was in consideration of the rarified five star video score, but when you throw in the problems that pile on, this is as good as it gets. Potential, this one had. 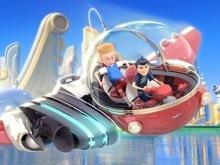 Another Blu-ray 3D release from a film released on Blu-ray 2D in 2007, another Linear PCM track replaced by DTS-HD Master Audio 5.1, another experience that doesn't differ, plus and minus, from the one we had before. Since the same strengths and weaknesses from that 2007 release ring true again, here they are. A self fulfilling prophecy, perhaps, but that's usually how these time travel films work out in the end...

Bass tones have an earthy rumble and treble whizzes are clean and stable. The crisp dialogue is naturally spread across the front channels and sounds nice and even. More importantly, the rear speakers are frequently used to open up the soundfield and create a convincing space.

Pans are transparent (albeit a bit artificial to my ear) and directionality is incredibly accurate for an animated film. The bouncy score is rich and really makes the entire track sound more robust and complete. My sole nitpick lies with the sound effects (or lack thereof) since many of the futuristic environments are crowded with muted inventions and hushed whirs. While I dig the prioritization of the dialogue, it's no excuse for leaving out so many tiny details in the soundscape. 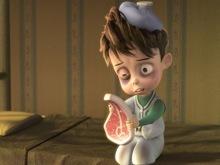 There are no extras on the 3D disc, and all extras below are from the 2D version. This set includes a DVD that was not found in original pressings of the film, and was later a double dip to make a combo pack.

The supplement package review below is a repurposing from the original review, to fit our newer format.

'Meet the Robinsons' is a fun film, a fairly smart, accessible time travel story for all ages, with a great message behind it, and a number of memorable scenes and characters. The Blu-ray 3D release of the film starts out amazing but loses steam by the time the third act comes around. This combo pack includes the 2D disc, as well as a DVD, making it a solid all-around release, but this one had potential for a five star video score, and botched it. Kinda sad. Oh well, near-demo material for 2/3's of a film is much better than ner-demo material for maybe ten seconds like some of the early 3D discs had. This one comes recommended, despite the slightly exorbitant price point.