A new chapter in the beloved RING horror franchise. A young woman becomes worried about her boyfriend when he explores a dark subculture surrounding a mysterious videotape said to kill the watcher seven days after he has viewed it. She sacrifices herself to save her boyfriend and in doing so makes a horrifying discovery: there is a "movie within the movie" that no one has ever seen before…

In the first two (American) movies, Samara spread her threatening seven-day countdown to imminent death via VHS tapes at a time when digital media was wildly popular and often preferred. So why'd she do it? Because she was keeping it real. Playing it old-school, as it were. If the phrases make me seem old and out of date, then remember the words of the college professor, Gabriel (typecast and looking very bored Johnny Galecki), who discovers Samara's tape in an old VCR player: "It's vintage." However, being the cool, hip teacher who chills with his students on a secret seventh floor where it's a rave 24/7, the professor of who-the-hell-knows-what has given our creepy, watery paranormal girl a much-needed upgrade. She's gone digital! Now, she can reach out and connect with her intended, foolishly incompetent victims through flat screen TVs and smartphones. No more wasted calls on push-button phones or strutting her stuff on bad-resolution CRT sets. Long wet strands of hair come at you in HD! The only other direction to go from here is going viral on social media. (*wink, wink*)

In Rings, the second sequel to the franchise based on Koji Suzuki's novel, the reason for the upgrade is not only self-explanatory to both modern audiences and those familiar with the myth established in the first movie. But it's also stupidly explained as a science experiment conducted by the same professor Gabriel, the messenger of death. (Get it? As in the archangel Gabriel, God's messenger delivering revelation. Only, here, it's meant to be ironic and dark because he delivers Samara's message of death. Oh, those clever filmmakers.) And again, what is he a professor of? We see him in one scene lecturing to a packed room, mumbling a bunch of nonsense, and then see him again rambling to one of his guinea pigs about evidence for the soul although he never explains how exactly he'll glean anything spiritual from a Tool music video and a death clock. Nevertheless, this story takes place at a make-believe college environment where students are desperate enough for a grade to volunteer in the experiment. 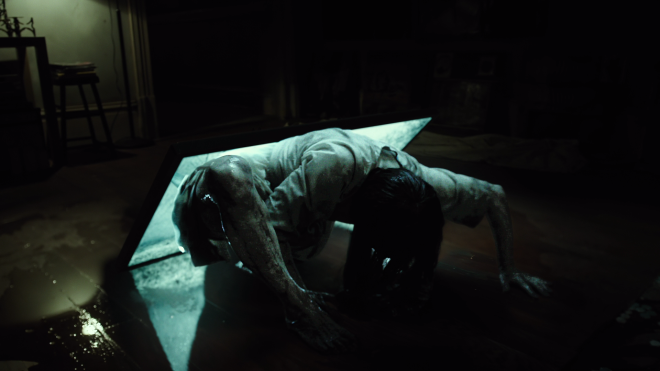 One of those volunteers is the ruggedly handsome freshman Holt (Alex Roe), a goofily innocent suburbanite who is still wet behind the ears on the evil treachery of those higher education liberal elites. When he goes missing, girlfriend back at home Julia (Matilda Lutz) marches straight to the unnamed university — probably because there wasn't any Northwestern institution that wanted to be associated with this snoozefest — and starts investigating her man's sudden disappearance. She was initially suckered into joining this disastrous claptrap by a facetime call from a mysterious but attractive woman also searching for Holt. Nope! Our heroine ain't having none of that! She immediately jumps into the car in the middle of the night and speeds to the school only to discover there is also another mysterious female vying for Holt's attention. And this woman likes to play mind games before deciding to suck face. If this movie is some kind of metaphor for modern relationships in the technological world, then mission accomplished!

The rest of Rings is the standard assortment of jump scares and a desperate race against the clock to beat Samara at her own game. In fact, much of the movie feels like a repeat of the first movie where Naomi Watts snoops for clues uncovering a murder cover-up and realizing some families are truly messed up. There's little in this third installment that doesn't feel like a familiar premonition, the sort of déjà vu feeling that'll have audience settling into a state of boredom rather than interest. Even Vincent D'Onofrio, good as he is as blind caretaker Galen Burke, is practically a copy of Brian Cox's role in Gore Verbinski's now classic supernatural horror film. Nevertheless, director F. Javier Gutiérrez, making his English-feature debut, immerses the dull story into a bottomless well of dark, brooding atmosphere, but fails miserably in producing any scares. With stylized, gloomy photography by Sharone Meir ('Whiplash,' 'Mean Creek'), the film is bizarrely attractive and moody, but looks are not enough for a passing grade and the filmmakers should have studied better.

Paramount Home Entertainment brings Rings to Blu-ray as a two-disc combo pack with a flyer for an UltraViolet Digital Copy. The Region Free, BD50 disc is housed inside a blue eco-vortex case with a DVD-9 on the opposing panel and a glossy, lightly-embossed slipcover. At startup, viewers are taken straight to a static menu screen with music.

Samara crawls out the screen with a shockingly good, near-reference 1080p/AVC MPEG-4 encode, displaying lush, opulent blacks in every scene. The digital photography is continuously bathed in inky rich shadows that penetrate deep into the 1.85:1 image without sacrificing the finer details, providing the movie with an appreciable cinematic quality and a great deal of depth. The heavily stylized cinematography also comes with spot-on contrast although much of it leans to the lower end of the grayscale, generating a darkly moody and ominous atmosphere. The deliberate, teal-orange look affects the palette, skewing many of the secondary hues warm, but primaries remain accurate and energetic. The freshly-minted transfer shows razor-sharp details in the clothing and furniture in much of the shallow focus photography, and facial complexions are revealing with lifelike textures. Although largely dim and pretty murky overall, the digital HD video is in superb shape.

Imminent death calls with a fatal warning thanks an excellent DTS-HD Master Audio 7.1 soundtrack that'll send shivers down your spine. A wide, welcoming soundstage displays crystal-clear clarity and distinction between the loudest and softest moments, and background activity moves between channels with fluid realism and convincing off-screen presence. Imaging is also kept expansive and highly engaging by the music of Matthew Margeson, exhibiting superb detailing and warm fidelity within the orchestration. Vocals are well-prioritized and distinct in the center, and low bass delivers a palpable and occasionally authoritative weight to several action sequences. The rears are continuously employed by either the voices of unseen characters or the echo of Samara's warnings. Various subtle noises pan from one speaker to the next with satisfying effectiveness and outstanding directionality, creating a surprisingly immersive and amusingly creepy soundfield.

Terror Comes Full Circle (HD, 13 min): Typical EPK-like piece with various interviews explaining the story, where the sequel falls in line with the franchise and the usual praise for the overall production.

Resurrecting the Dead: Bringing Samara Back (HD, 9 min): As the title suggests, the featurette discusses the character and history while also touching on the performance and makeup work.

Scary Scenes (HD, 7 min): More interviews on the genre in general and how this movie partakes.

Deleted Scenes (HD, 19 min): An assortment of 14 excised scenes, including an alternate ending.

Taking place thirteen years after Gore Verbinski's now classic horror favorite, creepy ghost girl Samara finally decides to make an appearance in Rings, and it's ultimately too little too late without none of the scares to make her sinister video worth watching. She also receives an upgrade, transitioning from vintage media technology to digital video, but Spanish filmmaker F. Javier Gutiérrez fails to make the best with it and only delivers a good-looking bad movie.

The Blu-ray, on the other hand, arrives with excellent audio and video that'll surely tempt some to watch it at least once. With a light collection of supplements, the third installment to the franchise is another sad case of bad flick, good disc.

Sale Price 17.24
Buy Now
3rd Party 2.48
In Stock.
See what people are saying about this story or others
See Comments in Forum
Previous Next
Pre-Orders
Tomorrow's latest releases