Mother love has been a popular and reliable tearjerking theme throughout film history, with some of Hollywood’s most durable Golden Age dramas hinging on the sacrifices devoted moms make for their beloved progeny. Tomorrow Is Forever cleverly flips that formula by shifting the onus onto the father, who struggles to keep his paternity a secret from the grown son he never knew he had. Though its preposterous plot is often difficult to swallow, Irving Pichel’s absorbing drama brims with elegance, excellent performances, and enough heartfelt emotion to require a Kleenex or two. It's no wonder Tomorrow Is Forever scored big at the box office and stands as one of the best remembered weepies of the 1940s.

The story begins in 1918 as World War I draws to a close. Elizabeth MacDonald (Claudette Colbert) anxiously awaits the return of her husband John Andrew (Orson Welles) from battle-scarred France, but instead receives an unexpected telegram announcing his death. Shattered by the news, Elizabeth appreciates the concern of her understanding boss, Lawrence Hamilton (George Brent), who helps her through the crisis and later proposes marriage after she discovers she is pregnant with John’s baby. The couple names the child John Andrew (they call him Drew), and Larry raises him as his own. Though Elizabeth is happy and learns to love Larry, she never feels the passion for him that she felt for John.

Yet unbeknownst to Elizabeth, John didn’t die in France after all. An exploding shell horribly disfigured him, and rather than return to Elizabeth and be a lifelong burden, he chooses to keep his identity a secret and leave Elizabeth free to pursue happiness on her own. John’s doctor (John Wengraf) disagrees with his decision - “I can only heal you, but she can make you whole,” he says - but consents to perform plastic surgery on him to reconstruct his face. Twenty years later - in a stunning coincidence - a bearded, limping John, who looks far older than his years and is now a highly respected chemist, arrives in the U.S. with his five-year-old daughter Margaret (Natalie Wood) to work for Larry’s company. Larry befriends him and brings him home to meet his wife and family.

Of course, John recognizes Elizabeth at once, but his altered features make no impression upon her and she simply views him as her husband’s business associate. His long dormant feelings for her immediately reignite, and after he meets the grown-up Drew (Richard Long), he quickly connects the dots and realizes the young man is his son. Yet John doesn’t wish to disrupt the stable lives of Elizabeth or Drew by revealing the truth, even as Elizabeth begins to sense there might be more to John than she realizes.

In addition to its main romantic storyline, Tomorrow Is Forever engages in a spirited debate about war and isolationism. The bulk of the movie takes place in 1939, just after World War II begins in Europe, and Drew, swept up in the furor, hopes to go to Canada to join the Royal Air Force so he can fight against Hitler. Elizabeth, terrified he will meet the same fate as John, can’t understand why Drew would want to risk his life when the U.S. isn’t involved. The heated discussions supply the film with welcome underlying substance that not only raises relevant issues that still hit home today, but also tempers the syrupy nature of the main narrative.

The high-quality acting lends appropriate gravity to the proceedings, too. Colbert, who had recently played a similar role in David O. Selznick’s Since You Went Away, always projects a natural sincerity that makes almost every character she portrays believable. Passionate, without resorting to showy histrionics, and always poised and refined, Colbert steals focus without forcibly grabbing it. Brent, who spent much of his career as Bette Davis’ leading man of choice, knows how to gently support female stars, and he performs the task with typical aplomb here, exuding a quiet strength and tenderness that’s quite effective.

Yet it’s Welles who impresses the most. Always adept at playing aged characters, the 30-year-old actor is 12 years Colbert’s junior, but looks at least a decade older and perfectly embodies a crippled, broken man whose body and spirit have been irrevocably battered. Welles exercises admirable restraint, especially during his interactions with Drew. John must walk a treacherous tightrope as he tries to conceal his identity from his former wife and son while struggling to keep his powerful emotions in check, and Welles beautifully telegraphs that agonizing dilemma, mixing a profound inner strength with a heartbreaking vulnerability. He also relates well with the pint-sized Wood in her first notable role, two years before she would captivate audiences as the precocious Susan Walker in the holiday classic Miracle on 34th Street. Wood is mesmerizing as a troubled war orphan, and her scenes with Welles are quite touching and strikingly natural.

Tomorrow Is Forever is unashamedly sentimental, but its themes of family, sacrifice, and duty remain timeless. In lesser hands, its far-fetched story might have devolved into a melodramatic mess, but Pichel's sensitive handling of the material and the sincere performances elevate this underrated and affecting film. And thanks to this Blu-ray restoration, Tomorrow Is Forever should continue to wring emotion from audiences for many tomorrows to come. 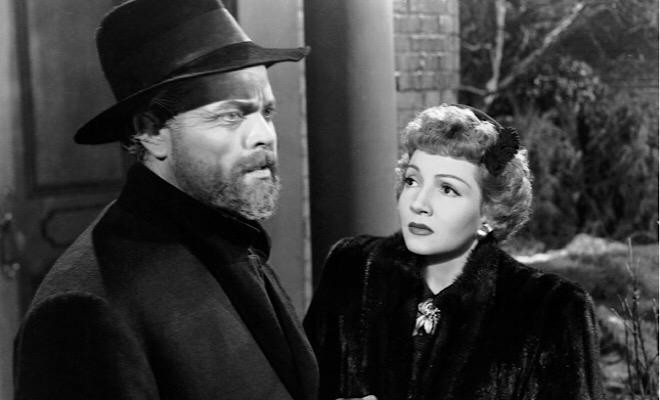 Tomorrow Is Forever arrives on Blu-ray packaged in a standard case. Video codec is 1080p/AVC MPEG-4 and audio is DTS-HD Master Audio 2.0 mono. Once the disc is inserted into the player, the static menu with music immediately pops up; no previews or promos precede it.

Classicflix has supplied a brand new remaster of this romantic drama, and the results are quite good. Though some faint print damage still remains on the source material, the 1080p/AVC MPEG-4 transfer exudes a pleasing vibrancy that showcases the lush cinematography of Joseph A. Valentine, whose credits also include Hitchcock's Shadow of a Doubt and Rope. Excellent contrast brings the image to life, while a natural grain structure preserves the film-like appearance. Deep, inky black levels heighten the impact of Colbert's wardrobe, and terrific gray scale variance enhances depth and the clarity of details. Clothing textures are vivid, as are wallpaper patterns and various set decorations, and sharp close-ups highlight both Colbert's glamour and Welles' aged makeup. A few scenes flaunt a softer look than others, but that's to be expected in a film of this vintage, and the variances are generally quite slight. Independent features often don't stand the test of time, but thanks to this top-notch restoration, Tomorrow Is Forever may indeed last forever, and classic movie fans should be very thankful for that.

A couple of issues afflict the DTS-HD Master Audio 2.0 mono track, yet it remains a strong rendering overall that nicely complements the film. A bit of surface noise can be detected during quiet moments, as well as an errant pop or two, but the most notable deficiency is a couple of sync problems that occur around the 41-minute and 98-minute marks. For no apparent reason, the dialogue gets slightly out of sync during those periods, and the distraction breaks the movie's spell. Thankfully, the episodes are brief, and some viewers may not be bothered by them. Max Steiner's full-bodied music score occasionally tests the limits of the track's dynamic scale, but distortion is kept at bay, and all the dialogue is clear and comprehendible. The piercing screams of Wood during an emotional scene are crisp and clean, and atmospheric subtleties come through well. Considering the film's age and lack of a major studio pedigree, this track sounds surprisingly spry, and the few imperfections don't compromise its quality.

Just a couple of supplements are included on this Blu-ray release.

Audio Commentary - Film music restorationist Ray Faiola sits down for an informative, often lively commentary that examines much more than the musical motifs of Max Steiner's score and the composer's philosophy. Faiola calls Tomorrow Is Forever one of the "best remembered independent features of the 1940s" and supplies plenty of cast and crew bios, outlines the differences between the original novel and its film adaptation, quotes good and bad reviews of the movie, and provides tips for listening to the disc's isolated score track. In addition, the 30-minute 1950 Screen Director's Playhouse radio adaptation of Tomorrow Is Forever, which features Colbert reprising her role opposite a young Jeff Chandler in the Orson Welles part, is presented in three separate segments as part of the commentary...though why the broadcast couldn't have been included as a separate supplement and thus presented without interruption (and the distraction of competing, low-volume dialogue from the movie in the background) is puzzling. Faiola does make a couple of errors - he misstates the year of Natalie Wood's death as 1988 instead of 1983, and gets tripped up by the number of "l"s in actress Lucile Watson's name - but those are minor missteps in an otherwise stellar and enjoyable discussion.

Isolated Music Track - Max Steiner was one of Hollywood's most prolific and accomplished composers, and this isolated track allows listeners to fully appreciate his lush, romantic score.

Tomorrow Is Forever may be saddled with a preposterous, overly sentimental story, but excellent acting from a stellar cast, solid direction by Irving Pichel, and superior production values help us fall for this emotional tale of love, war, and family hook, line, and sinker. Claudette Colbert, Orson Welles, and George Brent give the material their all, and the Blu-ray presentation from Classicflix, featuring a remastered video transfer, good audio, and a lively commentary track, enhances the film's appeal. This is another attractive release form the fledgling company that continues to prove its steadfast commitment to classic movies. Recommended.

Sale Price 19.96
List Price 29.98
Buy Now
3rd Party 9.93
In Stock.
See what people are saying about this story or others
See Comments in Forum
Previous Next
Pre-Orders
Tomorrow's latest releases