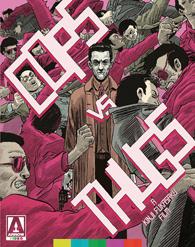 Considered by many to be director Kinji Fukasaku's greatest single-film achievement in the yakuza genre, Cops vs Thugs was made at the height of popularity of Toei Studios' jitsuroku boom: realistic, modern crime movies based on true stories taken from contemporary headlines. Returning to the screen after completing their Battles Without Honor and Humanity series together, Fukasaku joined forces once again with screenwriter Kazuo Kasahara, composer Toshiaki Tsushima and star Bunta Sugawara to create one of the crowning achievements of his career, and a hard-boiled classic which is still ranked as one of the best Japanese films of the 1970's. It's 1963 in the southern Japanese city of Kurashima, and tough-as-nails detective Kuno (Sugawara) oversees a detente between the warring Kawade and Ohara gangs. Best friends with Ohara lieutenant Hirotani (Hiroki Matsukata), he understands that there are no clear lines in the underworld, and that everything is colored a different shade of gray. But when random violence interrupts the peace and an ambitious, by-the-books lieutenant (Tatsuo Umemiya) comes to town, Kuno's fragile alliance begins to crumble. Greedy bosses and politicians alike seize the opportunity to wipe out their enemies, and Kuno faces the painful choice of pledging allegiance to his badge and keeping a promise to his brother. Echoing the great crime films of Sidney Lumet and Jean-Pierre Melville, in Fukasaku's world, there's no honor among thieves or lawmen alike, and the only thing that matters is personal honor and duty among friends. Kasahara's shattering screenplay and Fukasaku's dynamic direction support an all-star, ensemble cast to create one of the most exciting, and deeply moving films about cops and criminals ever made.