From John Travolta's electrifying Oscar-nominated performance to the Bee Gees' top 10 soundtrack to the unforgettable dancing, Saturday Night Fever is a movie sensation that captured the world's attention like never before. Now catch the fever all over again with this 30th Anniversary Special Collector's Edition that goes behind-the-scenes with special features on the history, culture and fashion of disco, the smash-hit soundtrack, an exclusive look at Hollywood legend John Travolta, and so much more. Now more than ever before, Saturday Night Fever is the one film that'll make you feel like dancing.

In some ways, it's hard to believe Saturday Night Fever is 40 years old. I wasn't old enough to see this R-rated movie back when it played in theaters, but I certainly grew up with it on cable and even remember the disco craze that the film helped enhance to the point that it seemed every club in the late 70s was having a disco contest on Saturday nights. But it's been a while since I actually sat down and watched the movie from beginning to end. Does it still hold up? Well, yes...and no.

John Travolta was already very much a household name in 1977, having had a successful run on the TV series, Welcome Back, Kotter. But Saturday Night Fever marked his first leading role in a motion picture, and he pretty much knocks it out of the park. I'm guessing most of you have long forgotten that Travolta was nominated for a Best Actor Oscar for his role here – and it's not undeserving.

The biggest problem though, and one of the reasons the movie hasn't aged as well as one might hope, is the supporting cast around Travolta – none of whom are particularly good actors, aside from some of the adults in Tony Manero's world who have limited screen time. It's perhaps no surprise that none of his co-stars went on to particularly huge careers, although most of them have remained active – perhaps in no small part due to their participation in this film.

Another issue looking back on Saturday Night Fever is that while it certainly is a reflection of how many people acted and spoke in the late 1970s (particularly in the Brooklyn area where the movie takes place), the character of Tony Manero – who became a cultural icon when the film was released – will seem very much like an antihero to modern audiences. It's up to the viewer to decide if Tony is borderline racist (he certainly has no problem using derogatory language toward Hispanics), but there's no doubt he's a misogynist – making sexist and offensive remarks to the women in his life throughout the film and – gasp! – even assaulting one sexually not long before the movie's conclusion. Were audiences and critics okay with this back in 1977? Again, I'm too young to remember the reaction, but I don't recall a big fuss back then about kids my age looking up to the character as a role model. Of course, Tony does have his softer moments in the movie and seems to make a decision about bettering himself as the film comes to an end...although I'm not sure that makes up for what comes before. (For the record, I like the character a whole lot better as portrayed in the 1983 Sylvester Stallone-directed sequel, Staying Alive, despite the fact that movie has almost been universally panned by critics and fans alike.)

Ah, but the dancing! Make no doubt about it, watching Travolta move to the tunes of The Bee Gees (and a few other acts) is the real reason to watch and enjoy Saturday Night Fever. If you haven't viewed the film in a while, you may be surprised at how little disco by Travolta is actually in the movie. His best moments don't even come at the conclusion, either. While his last dance in the film is a rather slow and uninspiring coupling with co-star Karen Lynn Gorney, it's his solo dance at the mid-way point of the movie (to The Bee Gees' "You Should Be Dancing") that really lights up the screen. I've heard a rumor over the years that director John Badham was originally going to shoot Travolta dancing from the waist up and try to use a body double for the rest of the dancing, but John insisted on learning all the moves himself, knowing that audiences would want to see him doing the moves. That's was probably the difference between this title being forgotten in the annals of film history and turning into the international blockbuster it became.

This 40th Anniversary release of the movie features both a new Director's Cut of the movie and the original theatrical cut. The new Director's Cut isn't significantly different from the original, but adds a few moments back into the film – including a really nice moment where Tony looks out at the Verrazano-Narrows Bridge and traces his fingers across its outline, dreaming of a better life for himself. That moment is so powerful, it's hard to believe Badham cut it from the original, and it's nice to see it put back into a cut of the film.

Saturday Night Fever dances its way back onto Blu-ray with a 50GB disc housed inside an eco-friendly Elite keepcase with a slipcover that matches the case's artwork. A sole insert advertises the popular Bee Gees album on one side and other classic titles available from Paramount on the other side. There are no front-loaded trailers on the Blu-ray, whose main menu matches that of the prior Blu-ray release of the movie: A shimmering disco ball on the right of the screen with images of the movie on it and a montage of footage on the left of the screen, with menu selections horizontally across the bottom. 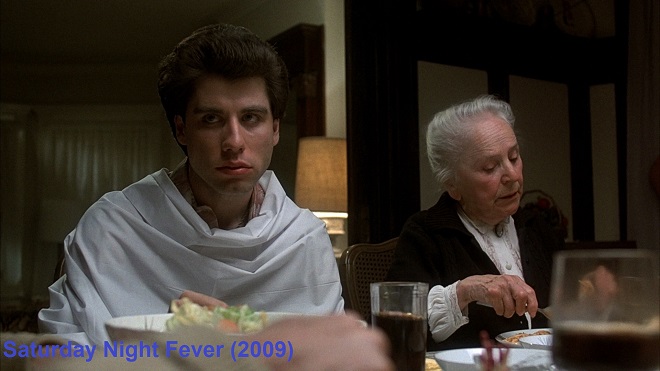 Saturday Night Fever was originally shot on 35mm film and appears here in its original aspect ratio of 1.85:1 using an MPEG-4 AVC codec. Both the Director's Cut and the original theatrical cut of the movie on this release are taken from a new 4K master created using an original negative.

The new transfer looks very nice – retaining the appearance of film while still providing plenty of detail, particularly during daylight sequences and those that take place in the paint shop where Tony works. Other scenes are a little more "flat" looking, particularly those that take place in one of the nightclubs, where the red push and frequent smoke tend to make things a little hazier.

The controversy here, as is often the case with new transfers, is if this is actually better that the old release. If you look at the screenshots provided here, you'll notice the new transfer is noticeably softer than the prior one. Yes, the old release had some edge enhancement, but may have provided more detail overall. Another issue is the framing, as this new transfer is framed a little "tighter" than the previous one, with a little less (but not much) visual information on the top and bottom of the image. Which is correct? Well, it's actually probably the new version, as the prior release had a non-theatrical 1.78:1 aspect ratio as opposed to the correct 1.85:1 aspect ratio provided here, although one could still question whether they framed it correctly when creating the 1.85:1 image. Hey, at least the color timing isn't too drastic between the versions (the new Director's cut is a little more subdued/darker as you can see from the third screenshot comparison below, but the overall color palette remains pretty much the same), which is more than I can say for many new Blu-ray transfers these days.

I didn't notice any problems with artifacting, banding, or aliasing, and while black levels aren't quite inky deep, they're solid enough to avoid any delineation issues or cause noticeable noise in the background of shots. Grain is still evident in the print, but pushed enough into the background that it's never a distraction.

The only track available on the Director's Cut on this Blu-ray is an English 5.1 Dolby TrueHD track, which reportedly has been updated from the 5.1 TrueHD track used on the prior Blu-ray release. The updated track also is available on the original cut, as are 5.1 Dolby Digital tracks in French and Portuguese, as well as a Spanish mono track.

Although the audio has been tweaked a bit from the prior Blu-ray release, there's not really a huge difference. The rears are use almost exclusively to enhance the musical numbers, and not for much else. I really didn't notice other ambient noises, and there's no feeling of immersion whatsover. The track is very much front-heavy, and aside from some obvious ADR usage where voices sound a little more hollow, dialogue is crisp and understandable throughout. It's a shame this 40th Anniversary release couldn't have gone back and remastered the original Dolby stereo mix of the track for a 2.0 presentation here, but the lossless 5.1 audio provided isn't so overbearing or tinkered with to the point that it makes it feel out of date with the movie itself. So it's a satisfying, if unremarkable, track. 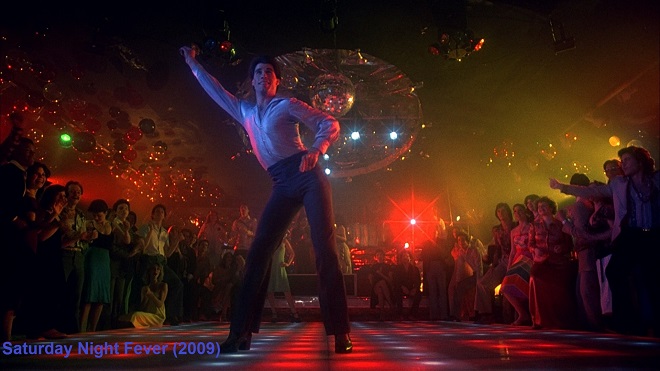 Commentary by Director John Badham – This audio commentary track dates back to the 25th Anniversary release of the movie on DVD (in 2002), but is still quite informative and fun if you've never heard it before. It's only available to listen to while watching the theatrical cut of the film.

70s Discopedia – Remember those "Pop-Up Video" factoids that were popular on VH1 in the late 1990s? This is the same concept, with factoids about the movie popping up as you view the film. They all appear on the bottom left corner of the screen, inside a mini-disco floor design. This extra is available for both cuts of the movie. This extra, as well as all the others listed below, has been ported over from the prior Blu-ray release of the film back in 2009.

Back to Bay Rridge (HD 9:01) – Actor Joseph Cali (who plays "Joey" in the movie) revisits the Brooklyn neighborhood where the movie was shot.

Dance Like Travolta with John Cassese (HD 9:50) – The "Dance Doctor" teaches us all the moves of the big dance that Travolta and co-star Karen Lynn Gorney perform in the movie's big dance contest. You need a partner to try this out, so naturally, I just had to watch.

Fever Challenge! (HD 4:00) – This is another dance skill featurette, asking viewers to match movements with the lights of the dance floor shown on screen. I failed miserably.

Deleted Scene – Tony & Stephanie in the Car (HD 1:32) – A single deleted scene from the movie in which Tony is once again frustrated that Stephanie won't take their friendship further. (Note: This release nixes two other deleted scenes that were on the 2009 Blu-ray release. Why? Because they've been put back into the Director's Cut of the film.) 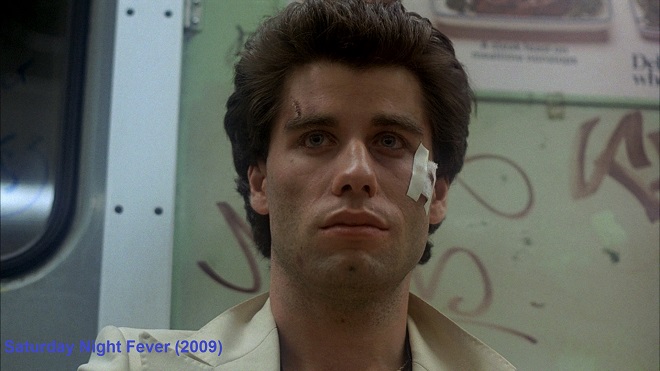 I'm not sure Saturday Night Fever holds up in terms of story appeal, but boy does it make up for it in terms of music and dancing. Travolta is still mesmerizing to watch in arguably his most famous role. Because there are no new bonus materials here (other than the new transfer and Director's Cut) those that own the prior Blu-ray may want to wait for the price to drop a few bucks before picking this up; however, this release is still Recommended.

Sale Price 9.99
List Price 16.99
Buy Now
3rd Party 5.47
In Stock.
See what people are saying about this story or others
See Comments in Forum
Previous Next
Pre-Orders
Tomorrow's latest releases