"I'm going to show my boobies."

It was a big deal back in 1981. Julie Andrews, America's singing sweetheart and the star of such wholesome fare as Mary Poppins and The Sound of Music, would - gasp! - bare her breasts on screen in a new film written and directed by her husband, Blake Edwards. Could this really be possible? A couple of years before, Andrews tested the waters by uttering four-letter words and brandishing her middle finger in Edwards' 10, but this was taking the whole overhaul-your-image thing to a whole new level.

Andrews' big reveal may have been the hook to lure audiences into the theater, but it's only one over-the-top element in a movie that's chock full of them. Though classified as a comedy, S.O.B. is really a nasty epistle to Hollywood that brutally lampoons the film industry's massive egotism and megalomania, pervasive perversion, and utter insanity. And it comes from someone who knows all about all of it.

Like S.O.B.'s main character, Felix Farmer (Richard Mulligan), Edwards was a Midas-touch producer-director and Tinseltown darling throughout the 1960s. Every project he touched made money, from Breakfast at Tiffany's and Days of Wine and Roses to The Pink Panther and The Great Race. But a 1970 big-budget flop called Darling Lili, a World War I espionage musical starring Andrews and Rock Hudson, nearly bankrupted Paramount Pictures and reversed the trajectory of Edwards' career. He eventually rebounded, but the pent-up rage over his mistreatment by the industry that once championed him percolated for a decade before erupting with volcanic force in S.O.B., which loosely chronicles his experiences and crisis of confidence while viciously caricaturing some of Hollywood's most colorful figures and recognizable stereotypes. Though the movie is a kitchen sink of wacky gags and spoofs, veiled references, and mean-spirited zingers - some of which work and some of which don't - it paints an appropriately zany portrait of an unruly environment that's fueled by drugs, egos, libidos, and boatloads of money and can't even begin to mirror real life.

When Felix's latest film, Night Wind, lays a massive egg at the box office, a deep depression consumes the distraught producer-director. He tries to commit suicide several times without success, leading his annoyed, self-centered wife, Sally Miles (Andrews), the picture's pampered star, to become fed up with him. Yet just when Felix seems poised to fall off the precipice, a wild party at his Malibu beach house (that devolves into an orgy) sparks an epiphany. Why not reshoot the G-rated bomb and transform it into a provocative soft-porn musical? And why not have his Oscar-winning spouse shed her asphyxiating goody-two-shoes image and appear topless? The idea instantly rejuvenates Felix and completely consumes him. "We gave them virtue," he cries. "They want vice. We sold them schmaltz; they prefer sado-masochism. Instead of the American dream, it should have been the American wet dream!"

Convincing Sally to go along with his outrageous scheme is no easy task, especially when Felix decides to sink their entire fortune into the film because ruthless studio chief David Blackman (Robert Vaughn) won't finance it. But when word leaks the revamped Night Wind just might end up a hit, Blackman wants a piece of what surely will be a lucrative pie, and his underhanded machinations spur Felix to take drastic measures to preserve control of what he perceives to be his crowning masterwork.

Many of us know what s.o.b. usually stands for, but in this case the acronym actually means "standard operational bullshit." Yet both definitions could aptly describe Hollywood's cutthroat nature and dirty business practices. Edwards seems to relish stabbing his subject and twisting the knife, and though his revenge may seem a bit unfocused, it sure feels cathartic. Unfortunately, the inanity and crudeness of the humor occasionally shroud the astute observations, but Edwards still gets his point across loud and clear.

And that's largely due to the sensational cast. All the actors play their parts to the hilt, always going overboard and rarely exercising anything remotely resembling restraint. Andrews delightfully skewers her own image and seems to exude genuine liberation during her glorious moment of exposure, while Mulligan is a whirlwind of unbridled energy as the incessantly tortured Felix. William Holden (in his final film role), Robert Preston, Shelley Winters, Larry Hagman, Robert Webber, Marisa Berenson, Robert Loggia, Stuart Margolin, Loretta Swit, and a young Rosanna Arquette all make their mark in appropriately-madcap roles, a few of which are thinly disguised knock-offs of actual people.

The personal connections of Edwards and Andrews to the material and the send-ups of film industry stereotypes make S.O.B. fun, but despite all the broad slapstick and non-stop lunacy, the movie isn't really funny. It's got gags and pratfalls galore (could we expect anything else from the maker of eight Pink Panther movies?), but not much wit or sophistication, and that's what makes this screwball romp a love-it-or-hate-it type of picture. And to illustrate that dichotomy, S.O.B. received a Golden Globe nomination for Best Motion Picture Comedy or Musical and a Writer's Guild of America nod for Best Comedy Written Directly for the Screen, but it also nabbed two Razzie Award nominations for Worst Director and Worst Screenplay. Go figure.

Just like Hollywood, S.O.B. is loud, vulgar, crass, ultimately exhausting, and arguably the darkest black comedy in movie history. As satires go, this one is pretty scathing and the kind of deftly constructed "screw you" all of us wish we could produce ourselves. So if you're feeling bitter and angry, pop this baby in the Blu-ray player. It may not perk you up or reaffirm your faith in mankind, but it tells it like it is. 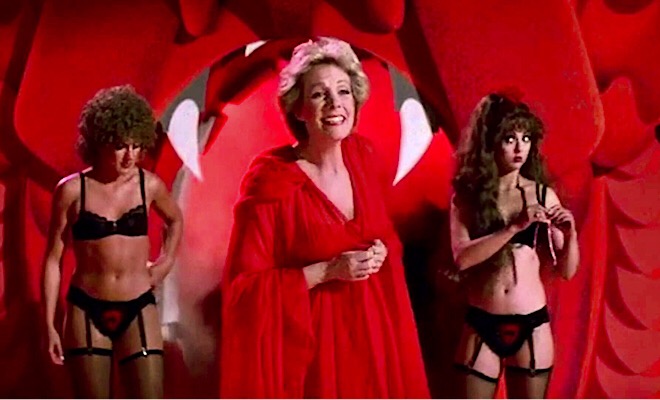 'S.O.B.' arrives on Blu-ray packaged in a standard case. Video codec is 1080p/AVC MPEG-4 and audio DTS-HD Master Audio 2.0 mono. Once the disc is inserted into the player, the static menu with music immediately pops up; no previews or promos precede it.

Warner Archive delivers another winning transfer that beautifully revitalizes a decades old film. The 1080p/AVC MPEG-4 rendering is distinguished by perfectly pitched contrast, excellent clarity, and vibrant color. Though the opening musical number appears a tad grainy, the image noticeably improves once the narrative begins, becoming crisp and vivid, yet maintaining a lovely film-like feel. Bold primary hues make a pleasing visual statement, and rich black levels and bright whites nicely balance the picture. Shadow delineation is strong, flesh tones remain natural and stable throughout, background elements are easy to discern, and no specks or marks dot the pristine source material. 'S.O.B.' is often vulgar and gaudy, and this high-quality transfer plays up those aspects to the hilt.

The DTS-HD Master Audio 2.0 mono track supplies clear, well-modulated sound without any noticeable hiccups. Though I had to pump up the volume beyond my system's customary setting, once I achieved a comfortable level, the track played quite well. A wide dynamic scale handles all the highs and lows of both the musical numbers and Henry Mancini's elegant score without a hint of distortion, and all the dialogue is easy to comprehend. Bass frequencies are adequate and no age-related imperfections, such as hiss, pops, or crackles intrude. This mix isn't particularly exciting (few mono tracks are), but it hits all its marks, and that's about all we can ask of it.

The only supplement is the film's three-minute original theatrical trailer, which is presented in high definition.

If you can't beat 'em, screw 'em. That's writer-director Blake Edwards' attitude in the semi-autobiographical S.O.B., a wildly vindictive up-yours to Hollywood and all its certifiably crazy characters. The story of how a monumental flop turns a successful producer's life upside down is filled with slapstick antics and spot-on satire, but remains surprisingly short on laughs. And yet it's often a hoot to watch the all-star cast, led by Julie Andrews, William Holden, and Richard Mulligan, bite the hand that feeds them...and draw blood. Though sadly devoid of supplements, Warner Archive's Blu-ray presentation features solid video and audio transfers that breathe new life into this blistering spoof, which is still worth a look.

Sale Price 20.01
List Price 22.49
Buy Now
3rd Party 15.92
In Stock.
See what people are saying about this story or others
See Comments in Forum
Previous Next
Pre-Orders
Tomorrow's latest releases