Doctor Who: A Christmas Carol

Debuting on television less than two months prior to arriving on home video, 'Doctor Who: A Christmas Carol' continues the Christmas special tradition, as December 25 has hosted a number of important specials in recent years. This episode even marked the first time an episode debuted on the same day in the USA and the UK. Matt Smith, the Eleventh Doctor, had a fantastic first series, and now gets his first special, an episode that's a complete departure in tone and scope from the rest of the Smith-starred episodes.

Amy Pond (Karen Gillan) and Rory Williams (Arthur Darvill) are supposed to be enjoying their honeymoon, but the space liner where their honeymoon suite is located is about to crash, and the over four thousand occupants are all going to die. One man can save them all, but Kazran Sardick (Michael Gambon) doesn't see any reason to go out of his way to help anyone, and doesn't care who lives or dies if it doesn't directly affect him. Cue: The Doctor (Smith), as he finds himself powerless to help, even his sonic screwdriver is incapable of altering the machine affecting the atmosphere that is causing the spaceship catastrophe, but with a time traveling vehicle at his disposal, The Doctor decides to take matters into his own hands, to try to change the only man who can help him.

'Doctor Who: A Christmas Carol' is one of the more intelligent episodes I've seen of this consistently big brained show, with its mixture of time travel paradoxes and classic literature creating some very amazing moments, and an episode that doesn't require too much past-'Who' knowledge to enjoy. It's funny, really, that I recently outed myself as a fan of 'Mickey's Christmas Carol,' yet less than two months later, I find myself tossing it aside in favor of the manner in which the Dickens tale is adapted here.

I'm sure the Brits will get a bigger kick out of seeing a pivotal 'Harry Potter' actor playing a one-shot character in the 'Doctor Who' universe than any stateside viewer will, but there is no denying how perfect Gambon is for the role. His voice, my goodness, is it absolutely perfect for the part, and his expressions and mannerisms fit the role almost as convincingly. He's a great Scrooge, even if the name of the character doesn't even allude to ol' Ebenezer. Meanwhile, a fairly new face takes the other main role, as singer Katherine Jenkins plays the role of Abigail Pettigrew, a woman whose fate is controlled by Sardick, in more ways than one.

The brilliance of this episode lies in the way the plot comes about. Sure, at first it just seems like The Doctor and Sardick are going to have a battle of the wits, but when speakerphones play Christmas carols throughout the wintery streets, our hero suddenly realizes what he has to do, playing the part of the Ghost of Christmas Past, and in doing so, altering the present for the miserly Sardick. The paradoxes are expertly navigated and explained, and we witness a character reluctantly change due to the interference and influence in his past changing his memories and mindset. It's really one of the best ideas I've ever witnessed in a time travel tale, a superb way to get what one wants, with enough patience and the means to do it.

This special really didn't need Amy or Rory, but they seem shoehorned in bit parts that are less than important (and why exactly did they take their Centurion and kissogram outfits on their honeymoon? That's just odd, even if they're into role-playing), and that may be one of this special's only flaws. Many 'Who' episodes in the past weren't reliant on having each and every main character present, as some are even referred to as Doctor-Lite or Companion-Lite due to this lack of emphasis. It just seems overly convenient, and was somewhat distracting. This is a story best fit for two main roles: The Doctor, and his rival, the bitter old man who won't budge from his icy stance.

Also, no review of this special can be complete without mentioning the hilarious use of sharks in the episode. Never have Rudolph or the rest of the reindeers been replaced so dangerously, as not even Mega Sharks can get the kind of air that these flying fish get. It's like watching a viking vs ninja battle royale, in terms of awesomeness. Santa (or as The Doctor knows him, Jeff) is poked fun of plenty, and through it all, twisted as it may be, the spirit of Christmas remains intact and burns through even the darkest of souls. 'Who' fans will find this episode enjoyable as can be, while Dickens lovers will definitely get a kick out of the way his most beloved work is adapted.

'Doctor Who: A Christmas Carol' arrives on Blu-ray on a BD50 disc housed in a standard (non-eco) keepcase with no packaging frills, other than a hideous cover. The disc has two pre-menu trailers (one for 'Doctor Who: The Complete Fifth Series,' and the other the basic BBC promo trailer that I'll continue to call the 'ello guv'nah due to its heavy Brit accent and quirk.

Be sure to stay tuned to the very end, as a sneak peak at the next batch of episodes in the show is shown in the last minute of the program!!! 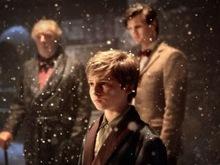 The VC-1 1080i encode for 'Doctor Who: A Christmas Carol' let me down. I don't mean that I was waiting for a ride, and it never showed up or anything like that, but after the amazing video quality found on the last box set, the bar was set at a height that this release just can't come close to. Most of the problems seem to be intentional, but over an hour, some things just can't be forgiven that easily.

You'd think that the overblown contrast in the opening scenes would be a simple aesthetic choice that would be isolated to the ship, but you'd be wrong. This entire episode is filled with the kind of heat that makes for a difficult viewing experience. Black levels are solid and realistic, but every other color is affected, and color bleed is a bit too frequent for my tastes. Grain levels are miles above and beyond that of anything found in the previous set, and they don't quite complement detail levels. Of course, the very heavy blue and black color design doesn't quite lend itself to vibrancy. Also, while blurs for flashback edges are nice, they deter quite a bit of detail, and make the evil Gambon look DNR'ed, which just isn't the case. Color 'Doctor Who' with nothing but black and blue, and color me unhappy. 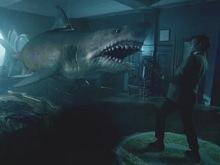 The DTS-HD HR (High Resolution, not Master Audio) 5.1 mix given to this 'Doctor Who' special is actually pretty kick ass. Dialogue has no problems with clarity, though it does stay in the front channels far too much. It's nice and loud, though bass levels are horribly understated, with solid rear activity, including some movement here and there, and some very piercing highs to give a bit of appreciable range. What impressed me here was the sheer amount of rear activity, from just random ambience to light echoes in larger rooms, as this "episode" of 'Who' sounds by and large better than anything found in the last series' box set. I'd still rather have video qualities on par with that excellent box set, but this isn't too bad. 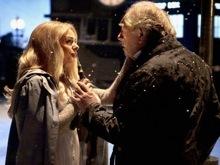 Two extras may not seem like much, but when both are the same length as the feature itself, that means this set of extras is pretty damn kick ass. 'Doctor Who' fans will recognize both of these extras, as they are series staples. 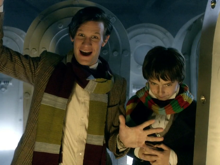 The second Matt Smith as The Doctor Blu-ray release isn't as immersive as the first, but this one shot episode is quite a hoot, an intelligent, witty, and smarmy take on classic Dickens, with great twists and some seriously cool sequences. This Blu-ray release doesn't measure up to the superb Fifth Series box set, but it's a pretty damn good disc regardless. Pick this one up, whether you're a fan of 'Doctor Who' or a fan of the classic tale being skewed so pleasantly here.

Sale Price 15
Buy Now
3rd Party 14.89
In Stock.
See what people are saying about this story or others
See Comments in Forum
Previous Next
Pre-Orders
Tomorrow's latest releases