Overview -
When street rat Aladdin frees a genie from a lamp, he finds his wishes granted. However, he soon finds that the evil has other plans for the lamp -- and for Princess Jasmine. But can Aladdin save Princess Jasmine and his love for her after she sees that he isn't quite what he appears to be?
OVERALL
Highly Recommended 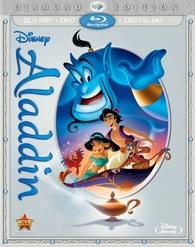 Everything seemed to go right for 'Aladdin,' (even though the movie was initially seen as a failure after it's first full screening; it was promptly reworked). The soundtrack was as memorable as any other Disney movie, the animation was lush and vibrant, its villain is still one of the best in Disney's illustrious vault, and the world wasn't sick of Robin Williams' shtick yet. The stars aligned and it ended up becoming an instant classic.

'Aladdin' isn't without its faults though. As much fun as it is watching Williams bring the Genie to life with the kind of madcap flare that only he can provide, and as great as Jafar is as the chief baddie, its treatment of ethnicity is bizarre. It's pretty obvious that Disney didn't think the audience would feel sympathetic toward characters that didn't look and sound like them. So, while the population of Agrabah speaks in thick Arabian accents and appear as Middle Eastern caricatures, Jasmine and Aladdin look and sound like Americans. It's interesting to note that after 'Aladdin,' Disney changed course with the main characters in 'Mulan,' 'Brother Bear,' and 'Pocahontas' didn't go the same route.

This is a 2-disc release that contains a 50GB Blu-ray and a DVD. There is a Disney Movie Rewards Code included, which also controls your Digital Copy of the movie. The release comes complete with a fully embossed, snazzy Disney slipcover celebrating this long-awaited Diamond Edition. 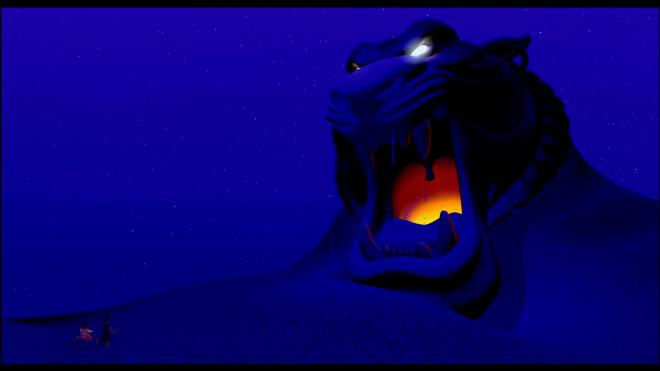 In 2013 we reviewed A Holland import for 'Aladdin' that looked remarkable in every aspect in regards to its visual presentation. Disney's Diamond Edition looks just as great. Compared side by side they're identical in every way – even down to the minor quibbles one might have with slight aliasing, banding, and such.

The film looks brand new. The CGI effects are given new life in the world of high definition. Sure, they might suffer from a few moments of the aforementioned digital anomalies, but for the most part they look tremendously rendered. Colors are bold and vibrant. Every single bit of the 1080p transfer exudes Disney's loving attention to detail.

Black levels are superb. Detail is crisp. Lines are definite and absolute. Color fills never waver. Every frame appears as it should. As with the earlier reviewed import of the film, Disney's highly anticipated Diamond Edition release looks nigh spectacular from start to finish. 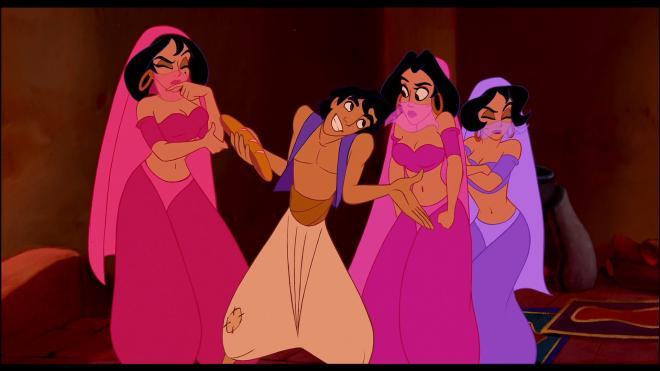 Right here is where the US release of 'Aladdin' outshines imports of the title. The imports have been using a very strong and commendable DTS-HD Master Audio 5.1 mix. However, this Diamond Edition release fashions 'Aladdin' with a newly minted DTS-HD Master Audio 7.1 sound scape that adds more than enough demo-quality audio worthy of an upgrade.

The added channels create an engulfing feeling, especially during the musical numbers. Genie's "Friend Like Me" booms from every channel as the camera pans and rolls around the scene. Dynamic panning works wonders here as the sound is ever-shifting from one channel to another depending on its orientation on screen. Dialogue is crystal clear. Surround channels are full of life. Low-end frequencies boom. When the Cave of Wonders roars you'll feel it.

I quite liked the 5.1 mix on the 2013 import. Here though, you're receiving an even more immersive soundtrack. One that sits you in the middle of the action and never lets up. Supposing you purchased an import a few years back, this would be reason to double dip. 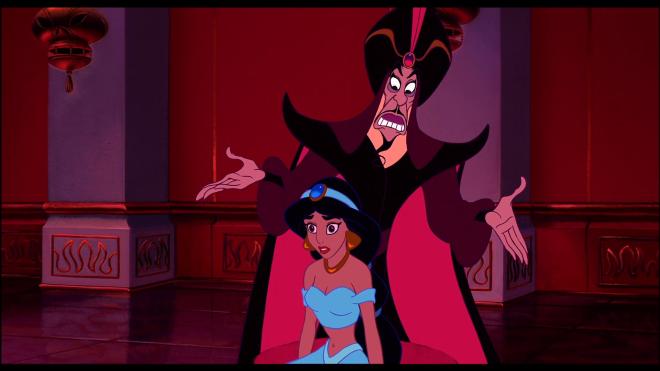 A Diamond in the Rough: The Making of 'Aladdin' (SD, 110 min.) - Comprised of a variety of different parts, this feature-length documentary, hosted by film historian Leonard Maltin, goes into extreme depth to cover how the movie was made. Heck, with all the segments added together the making-of doc is longer than the movie itself. This feature covers everything from voice acting to animation to production. It's an all-encompassing feature that fans will surely want to watch. One of my favorite parts is the segment called "Reflections on Black Friday" where the directors and supervisors talk about the daunting task of restructuring the entire movie because the first time it was screened everyone thought it was awful.

Deleted Songs (SD, 14 min.) - These are pretty much like the deleted scenes. They have a quick introduction from one of the directors setting the scene. There are four included here. The songs are: "You Can Count on Me" sung by Aladdin, "Humiliate the Boy" sung by Jafar, "Why Me" also Jafar, and "Proud of Your Boy" sung by Aladdin for his mother. The last song was obviously cut because the entire mother character was cut out of the story.

Deleted Scenes (SD, 6 min.) - Two deleted scenes here. First is "Aladdin and Jasmine's First Meeting," which had the two meeting in a very different way. The second is "Aladdin in the Lap of Luxury" where he's soaking up the palace life. It also features the character of his mother who was meant to play a big part in the movie originally, but was axed in the restructuring. Both of these are presented in storyboard form. 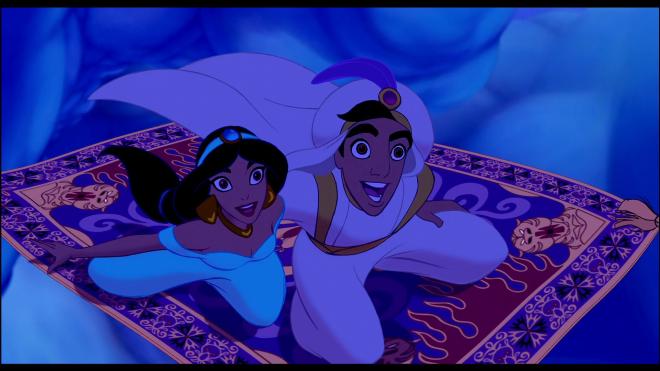 This new release of 'Aladdin' offers up the same great visual presentation that imports have. However, it boasts a new 7.1 mix that is demo-worthy in every sense of the word. Add to that a new helping of high-def extras and the Diamond Edition of 'Aladdin' is comes very highly recommended.

Sale Price 25
List Price 39.99
Buy Now
3rd Party 14.99
In Stock.
See what people are saying about this story or others
See Comments in Forum
Previous Next
Pre-Orders
Tomorrow's latest releases