Overview - This lush, Technicolor tragic romance from Luchino Visconti stars Alida Valli as a nineteenth-century Italian countess who, amid the Austrian occupation of her country, puts her marriage and political principles on the line by engaging in a torrid affair with a dashing Austrian lieutenant, played by Farley Granger. Gilded with fearless performances, ornate costumes and sets, and a rich classical soundtrack, Visconti’s operatic melodrama is an extraordinary evocation of reckless emotions and deranged lust from one of the cinema’s great sensualists.
OVERALL
Recommended

After his first three films helped launch the Italian neo-realist movement alongside the work of fellow directors Vittorio De Sica ('Bicycle Thieves') and Roberto Rossellini ('Rome, Open City'), Luchino Visconti made a vastly different type of film. Rather than another story about common people and their struggles in post-WWII Italy, given newsreel authenticity by being shot in black and white, Visconti created a lavish, aristocratic melodrama shot in glorious Technicolor, and he handled the material with equal skill.

Adapted from Camillo Boito's 1882 novella of the same name, 'Senso' begins in Venice 1866, during the last months of the Austrian occupation. The film opens during a performance of Verdi's "Il Trovatore." Italian audience members disrupt the opera by shouting and throwing sheets of paper and flowers, in the Italian colors red, white, and green. As order is trying to be restored, Austrian officer Lt. Franz Mahler (Farley Granger) mocks the Italians, enraging Marquis Roberto Ussoni (Massimo Girotti) to the point he challenges Mahler to a duel.

Countess Livia Serpieri (Alida Valli) is Roberto's cousin, and not wanting to see her cousin harmed, she attempts to intervene by meeting with Franz. They spend the entire night walking around the city talking. Unhappily married to the older Count Serpieri (Heinz Moog), she easily becomes smitten by the dashing Mahler. As their affair grows more heated so too do the tensions between Italy and Austria, with Prussia joining forces with the former. Livia finds herself torn between her love for Mahler and her love for Italy. Though Valli plays the emotions very big, they are always believable in context.

Visconti proves a very capable director. He handles scenes of great emotion between the two leads as well as he does the expansive battle scenes in the countryside. His noted eye for detail and his crew never fail him. Whether in intricately decorated interiors or during the choreographed action, the scenes are always visually appealing.

Although I haven't read the source, the changes to Bonito's story that work very well by expanding its scope. The focus on Livia is lessened and in its place is the war, giving the story more of a historical epic quality. Cousin Roberto is a new element and an integral part of the story, serving as a catalyst and raising the stakes of Livia's decision.

The film was intended to end with Livia devastated emotionally, wandering the streets harassed by drunken soldiers, but the Italian censors decided (incorrectly) that this cast the army in a bad light and ordered it changed. The ending finds Livia in a similar emotional state though a tad satisfied after pursuing justice/revenge from the authorities.

'Senso' is a good melodrama, as one woman's liberation is set against the backdrop of a nation dealing with its own. Visconti would next make a couple of neo-realist films and then revisit the upper class during this turbulent time in Italy's history in 'The Leopard.'

'Senso' (#556 in The Criterion Collection) is a 50GB Region A Blu-ray disc in a clear keepcase. The discs boot up directly to the menu screen without any promotional advertisements. Included is 36-page illustrated booklet containing Mark Rappaport's essay "'Senso' and Sensibility" and an excerpt from Farley Granger's autobiography, "Include Me Out: My Life From Goldwyn to Broadway".

The video has been given a 1080p/AVC-MPEG-4 encoded transfer displayed at 1.33:1. The liner notes reveal "this new digital restoration was created] from the original 3-strip Technicolor camera negatives and the film's surviving master positive." The source was clean and the picture looked consistent thanks to DaVinci's Revival system. No major digital artifacts were seen.

Color correction was done under the consultation of cinematographer Giuseppe Rotunno and Martin Scorsese, and the entire team was using a 1954 positive print and a print from the 2001 photochemical restoration as a reference. The colors are good, with some reds delivering the strongest hues. Fleshtones are consistent throughout. Blacks are adequate, but not overly rich.

The details come through very well, particularly the architectural elements. The ornate textures of the opera house interior and the worn exterior of building in the city are palpable. The details in the costumes by Marcel Escoffier and Piero Tosi also come through quite well.

The one drawback is that the picture is not very sharp. Objects blend into each other without distinct lines or edges and the image tends to get soft around the edges of the frame on occasion. However, there is depth, most notably on display in the wide shots during the battle scenes 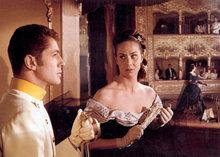 The audio is available in English LPCM 1.0 and was remastered "at 24-bit from a 35 mm positive print made from the original soundtrack negative." Pro Tools HD and AudioCube were used in the manual clean up. The opening scene at the opera with the singers and orchestra performing together was the audio at its most dynamic. The cannon fire during the battle was limited and didn't deliver much oomph through the LFE. With the actors dubbed by other performers, there is a slight flatness in the delivery of dialogue. The elements balanced well together in terms of loudness and when mixed together, though the captions may have helped this non-Italian speaker with the dialogue.

Although fictional, Luchino Visconti's 'Senso' has a sense of authenticity owing to the development of the characters and their believable actions, which makes the film intriguing as it plays out. Criterion's release is also intriguing, due of the impressive video restoration on display and the supplements that inform the film's making and the life of its director.

Sale Price 25.41
List Price 39.95
Buy Now
3rd Party 19.98
In Stock.
See what people are saying about this story or others
See Comments in Forum
Previous Next
Pre-Orders
Tomorrow's latest releases