The Passion of the Christ

The film begins in the Garden of Olives where Jesus has gone to pray after the Last Supper. Jesus must resist the temptations of Satan. Betrayed by Judas Iscariot, Jesus is then arrested and taken within the city walls of Jerusalem where leaders of the Pharisees confront him with accusations of blasphemy and his trial results in a condemnation to death.

With inspiring performances from Jim Caviezel as Jesus and Monica Bellucci as Mary Magdalen, this new edition of The Passion of the Christ features English, Spanish and Portuguese language dubbed audio for the first time ever.

In 2004, Mel Gibson followed up the box-office success of his award-winning 'Braveheart,' where the Aussie celeb earned an Oscar for directing, with 'The Passion of the Christ.' The Bible epic was quickly met with an equal amount of controversy and praise and was as much celebrated and lauded as it was divisive and contentious. Oddly, the script, which Gibson cowrote with Benedict Fitzgerald, tells what is arguably one of the most famous religious texts known around the world, a much-too familiar story that's been retold and reiterated numerous times on film since the beginning of cinema. The hullabaloo over a highly predictable plot that has essentially become a customary staple for filmmaking is what drew most non-believers, like yours truly. And to some extent, it's what also likely attracted believers as well. For myself, I paid simply out of curiosity to see what could have warranted such level of criticism and debate.

To my utter amazement, I enjoyed the film and still do. Not because of the story or whatever the spiritual message Gibson and his team were — and still are — promoting, of which there is none outside the already converted. What I admire most, and what I argue Gibson truly accomplished with this production, is that the New Testament story finally feels pertinent. It actually accomplishes what no other religious film has ever been able to do: make me feel and sympathize for Jesus. Far as I can recall, this is the first time the story has successfully humanized the grueling punishment and suffering that's frankly poorly expressed in the texts. During his trial, Jesus (Jim Caviezel) reflects back on his life and memories leading up to the day when he is sentenced to die. But the most heart-rending moments are those with his mother Mary (Maia Morgenstern) forced to witness her son slowly die and wipe his blood from the floor. 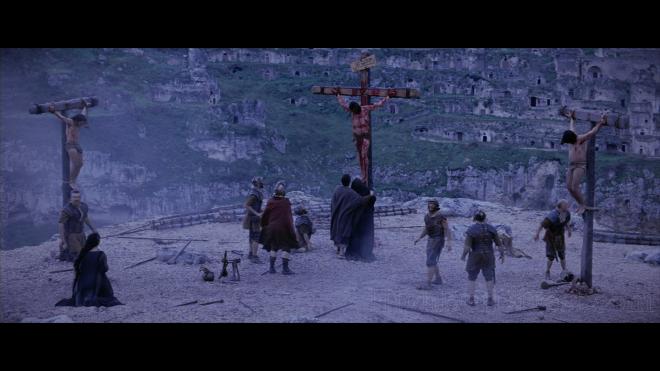 Gibson achieves this feat — or small miracle, if you will — by being allowed a great deal of creative license with the original source, starting with cherry-picking specific aspects he liked from the four different accounts told in the New Testament. The flashback scenes themselves are smartly focused on particular conversations devoid of any supernatural miracles. One shows his closeness to his mother while another his deep adoration for his friends during their last supper together. And Gibson further invests his passion project from a madly creative, visionary approach, remarkably transcending dogma or a person's opinion of the material. With the talented help of cinematographer Caleb Deschanel and editor John Wright, the film practically demands to be admired for the beautiful photography and stylized storytelling. It's essentially a big-budgeted, high-brow arthouse interpretation of a very well-known tale.

In spite of all that, I must admit feeling slightly offended by 'The Passion of the Christ,' particularly the filmmakers depicting the priests at the Sanhedrin trial in a disparaging light. I still remember my father's vehement disapproval of the film, warning that I would be disgracing my ancestors if I paid to see such shameful filth. However, whatever tinge of outrage felt during those few minutes was soon replaced by graphic, gory depictions of a man being lashed and scourged at the hands of other men who somehow took pleasure inflicting such horrible cruelty. Again, Gibson makes his audience feel the pain by not shying away from the blood-drenched carnage. And while Jesus's mother and Mary Magdalene (Monica Bellucci), a woman he saved from being stoned to death, watch in complete horror, we become spectators too, helpless to do anything but watch.

For believers, the film is an affirmation of their faith. But for the rest of us, it is a tale on the brutality and cruelty humans are capable of inflicting upon others simply because they are different and don't share our point of view.

20th Century Fox Home Entertainment brings 'The Passion of the Christ' to Blu-ray as a single-disc version of the previous "Definitive Edition" from 2009. The Region Free, BD50 disc is housed inside a blue eco-cutout case with a flyer for a Digital HD copy. At startup, viewers are taken directly to a screen with full-motion clips, music and customary menu options.

Mel Gibson's version of the greatest story ever told arrives on Blu-ray for the second time with an identical 1080p/AVC MPEG-4 encode, which is both a positive and somewhat disappointing. As seen in the 2009 "Definitive Edition" release, the source is not in the best condition with resolution wavering noticeably, and the film could greatly benefit from a restoration and remaster of the original 35mm camera negative.

Like before, the high-def transfer displays plenty of good clarity, for the most part, with some sequences looking sharper and revealing more than others. Every slash, gash and incision inflicted upon the body is made bare in gruesome detail, and on a few occasions, facial complexions expose the tiniest pore and wrinkle. However, much of the video's best scenes are offset by a good chunk of poor resolution and fair amount of blurriness.

As for the rest of the 2.40:1 frame, contrast tends to run hot with some severe blooming effects mainly from the sun, making it nearly impossible to distinguish clouds or even see the blue in the sky. There are also several instances of posterization in a few areas, most notably around the faces of actors, but thankfully, the picture is decently well-balanced. Black levels fare a bit better, rendered accurately with deep, penetrating shadows, but there are also moments of minor crushing with generally average shadow delineation. Whether deliberate or not, the palette seems somewhat restrained with more emphasis on secondary earth tones, but flesh tones appear flushed and a bit pale. In either case, primaries remain true and bold, particularly reds to make the blood and gore all the more vivid.

As with the video, so too the audio. This is the same DTS-HD Master Audio soundtrack heard in the previous release, and it remains just impressive today as it did then.

Much of the action is preserved in the fronts, delivering various sounds and noises across all three channels to bring the story alive. There isn't a moment, it seems, when the design is not bustling with a variety of intricate atmospheric effects convincingly moving off-screen, generating a highly-engaging and spacious soundstage. The mid-range isn't exactly stretched to its limits, even during the film's most intense scenes, but it's nonetheless dynamic and extensive with sharp detailing and separation in the upper frequencies. Dialogue reproduction is precise and distinct with excellent intonation and enunciation in every conversation. Low bass also provides an appreciably palpable and hearty presence to the music and action.

The passionately told tale continues the spirit and intensity with many ambient effects filling the entire room. From local wildlife heard in the distance or overhead to the loud commotion of people demanding blood, the rears are continuously kept busy and active. On a few occasions, those sounds flawlessly pan from the front to the back and from side to side, creating a satisfyingly immersive soundfield. Admittedly, the lossless mix doesn't compare to more action-packed features, but the high-rez track holds its own, sure to suck viewers into the story.

Interestingly, the package is a simple retread of the previous "Definitive Edition" release, minus the DVD containing a majority of the supplements.

'The Passion of the Christ' is Mel Gibson's unflinching, graphic and deeply passionate version of a well-known religious story. Putting beliefs and personal opinions about the plot's spiritual themes aside, the film's real accomplishment is Gibson humanizing a much too-familiar tale that's been adapted since the beginning of cinema. The new single-disc Blu-ray arrives with an identical audio and video presentation from the "Definitive Edition," which is neither bad nor good but the film could benefit from a new remasters of the OCN. Featuring only half of the supplements containing in the 2009 edition, the package is worth a look only for those who missed out on the previous release.

Sale Price 7.96
List Price 14.99
Buy Now
3rd Party 7.96
In Stock.
See what people are saying about this story or others
See Comments in Forum
Previous Next
Pre-Orders
Tomorrow's latest releases