Looking for any way to get away from the life and town he was born into, Tripp (Lucas Till), a high school senior, builds a Monster Truck from bits and pieces of scrapped cars. After an accident at a nearby oil-drilling site displaces a strange and subterranean creature with a taste and a talent for speed, Tripp may have just found the key to getting out of town and a most unlikely friend.

To call Monster Trucks a rehashed, unoriginal dreck of monstrous proportions is oddly both a fitting assessment of the movie as well as an unfair estimation. The children's action comedy falls somewhere between the extremes, neither absolutely awful nor an admirable accomplishment. There is only so much we could, should or would expect from a Nickelodeon production outside of its main objective and responsibility of entertaining the youngest among us. Which, for the most, the movie accomplishes satisfyingly well, mixing humor, drama and environmental concerns with the thrills and action of a typical summer blockbuster. There are a style and general air to the whole production that feel souped-up for summer audiences. Action sequences are laughably over-the-top and intentionally silly, almost cartoon-like. In one particular chase scene, a big-tired jalopy of a truck actually scales buildings, jumps across a moving train and even drives over a row of cars like a Monster Truckfest. For some, the movie is a well-tuned machine providing a delightful ride, but for others, it's a rough and jerky drive with a blown-out engine.

On the one hand, the high-concept plot cleverly uses the literal meaning of the title as its inspiration, featuring an adolescent tentacled monster that was accidentally unearthed and hides inside the body of an old, beat-up truck. The owner is Lucas Till of the X-Men reboot fame as high-schooler Tripp, a lonely and unpopular teen working at a junkyard owned by Danny Glover and whose main talent is, you guessed it, working on cars. After their initial scary meet-cute, the monster, which honestly looks much too adorable to be remotely scary — like a grown-up version of the baby squid delivered by Will Smith in Men in Black — befriends Tripp, who looks like a twenty-something awkwardly hanging out with high school kids. Although not made explicitly clear until later, we know their bond grows from an unspoken understanding of problems at home. The creature has been separated from its family, another pair we can only assume to be its parents, while Tripp hasn't spoken to his estranged father in years and mom (Amy Ryan) is dating the local sheriff (Barry Pepper), a cold, distant authority figure Tripp doesn't particularly care for. 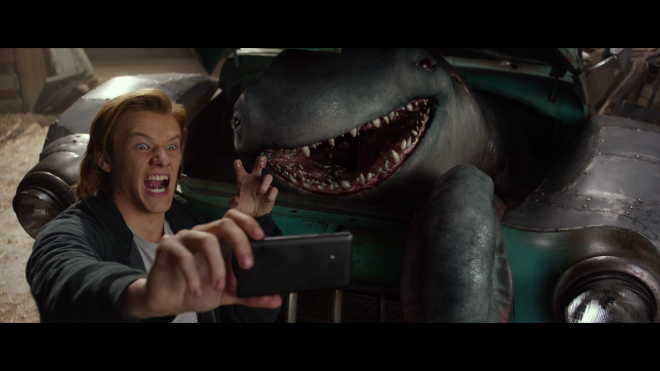 By sheer happenstance — or more like Derek Connolly's (Safety Not Guaranteed, Jurassic World, Kong: Skull Island, Star Wars: Episode IX) plot simply demands it — fate brings the two together because the evil corporation Terravex Oil ruined their families. Tripp's father left to work for the company while the fracking operation destroyed the monster's natural habitat, a subterranean water system with oil and natural gas that provides the creature with food. And thus begins a derivative adventure of reuniting the creature, which Tripp has named Creech, while a somewhat unappreciative teen learns mom's live-in boyfriend isn't all that bad. Along the way, Jane Levy (Evil Dead, Don't Breathe) hitches a ride as Tripp's love interest and fellow accomplices of several traffic violations. She resists at first but is easily persuaded when meeting Creech. Thomas Lennon tags along for the vehicular mayhem in the second half. He's a scientist studying the monsters and working for the evil corporate baddies, Rob Lowe and Holt McCallany, but he eventually joins the cause because, errrrr, the creature parents can play the Simon electronic memory game?

To be fair, this is an action fantasy geared for children, and the Simon Says game is a fun creative touch that will have toddlers screaming to own one. The cute — and admittedly, rather imaginative — idea for Monster Trucks also literally comes from the imagination of a four-year-old, the son of Paramount's former president. (His departure is not directly related to this movie's failure though I wouldn't be surprised if it was taken into consideration.) The movie was essentially shelved for the last two years and its release date pushed back several times, proving that a toddler's fantasy is probably not the best idea for a $125 million production. The story is ultimately a modern version of Spielberg's E.T. made from the junkyard parts of other vehicles but lacking the proper fuel to really drive it home. There are some fun bits to enjoy, thanks to the plot's upbeat nature. Action sequences are more comedic than riveting. Yet, seen from the eyes of a kid's love for friendly-looking monsters and trucks, it's like watching Hot Wheels cars creating havoc on the big screen. And that's really all the fun any kid wants.

Paramount Home Entertainment brings Monster Trucks to Blu-ray as a two-disc combo pack with a flyer for an UltraViolet Digital Copy. The Region Free, BD50 disc is housed inside a blue eco-vortex case with a DVD-9 on the opposing panel and a glossy slipcover. The package also includes a pair of wall decals. At startup, viewers are taken to a static menu screen with music.

The fine lines of clothing, furniture and the surrounding foliage are very well-defined from a distance, and the tiniest speck of rust, scratch or dent on Tripp's truck is distinct. Full of pep and enthusiasm, the 2.35:1 image displays a wide array of colors with primaries looking particularly animated and glowing. Facial complexions appear natural and revealing, exposing every wrinkle and blemish in the cast, including Lucas Till, who already looks much too old for the role. Shot on digital HD cameras, the transfer also comes with spot-on contrast and brilliant, crisp whites in the clothing and clouds. Blacks are, for the most part, true and full-bodied, providing the presentation with a lovely cinematic quality, but there are couple occasions where brightness levels drop a bit and shadows seem murkier than in other spots. Nevertheless, it's great picture quality overall.

The family action comedy also debuts with an excellent Dolby Atmos soundtrack, which defaults to Dolby TrueHD 7.1 for those not yet equipped. When the monsters are first unearthed, they move between the various channels with superb directionality, and things only improve during action sequences, as the room erupts with random noises, debris and growls circling the listener. Occasionally, those bits of commotion travel into the overheads with discrete effectiveness while quieter segments come with a variety of amusing atmospherics. However, the soundfield is not quite as convincing or satisfying as other object-based formats.

Much of the action is contained within the fronts, delivering a wide and welcoming soundstage with distinct, intelligible dialogue in the center. The mid-range is dynamic and extensive, providing the more rambunctious, loud moments with excellent detailing and clarity. A few ambient effects jump into the front heights, creating an amusing half-dome wall of sound. The low-end could be stronger, considering the visuals, but bass is nonetheless robust and responsive.

Who's Driving the Monster Trucks? (HD, 7 min): A series of cast & crew interview segments talking about the production, story, characters and their thoughts on the movie.

The Monster in the Truck (HD, 5 min): A closer look CG visual effects in a few key sequences.

To call Monster Trucks a rehashed, unoriginal dreck of monstrous proportions is oddly both a fitting assessment of the movie as well as an unfair estimation. However, seen from the eyes of a kid's love for friendly-looking monsters and trucks, it's like watching Hot Wheels cars creating havoc on the big screen. The children's action comedy crashes into Blu-ray with a fantastically satisfying audio and video presentation that'll leave the kid's cheering for more. Supplements are rather lackluster, but the overall package is plenty to keep the little monsters in the family entertained.

Sale Price 13.95
Buy Now
3rd Party 9.2
In Stock.
See what people are saying about this story or others
See Comments in Forum
Previous Next
Pre-Orders
Tomorrow's latest releases