The incredible untold true story of Katherine Johnson (Taraji P. Henson), Dorothy Vaughn (Octavia Spencer) and Mary Jackson (Janelle Monae) – brilliant African-American women working at NASA, who served as the brains behind one of the greatest operations in history: the launch of astronaut John Glenn into orbit, a stunning achievement that restored the nation's confidence, turned around the Space Race, and galvanized the world. The visionary trio crossed all gender and race lines to inspire generations to dream big.

By now, most, if not all, moviegoers know the story behind Hidden Figures, the biggest surprise sleeper hit of the year earning various accolades and nominations, all of which are very well deserved. Set during the height of the Cold War while the U.S. was in the middle of the Space Race against the USSR, the film highlights the contributions of the three women in the NASA program who assisted in safely putting a man in space and other missions. The film's title is in reference to their mathematical input and calculations that eventually made it possible for John Glenn to orbit the Earth. Of more interest, the title also refers to the fact that their contribution has largely remained unknown for five decades until one of them received the Presidential Medal of Freedom in 2015 and Margot Lee Shetterly's 2016 non-fiction book, on which Allison Schroeder and Theodore Melfi based their script. Their involvement has remained ignored and hidden long enough, and there is perhaps no better time than our current political climate to recognize these women's importance.

Of course, as is typical of most all Hollywood productions inspired by real life, the biographical drama takes a great deal of artistic license and liberty with certain events, starting with Dorothy Vaughan (an excellent Octavia Spencer). By 1961, the year this story is set, Mrs. Vaughan was already working as a supervisor of the West Area Computers for over ten years. But since the filmmakers want to also include the invaluable accomplishments of Katherine Goble Johnson (Taraji P. Henson) and Mary Jackson (Janelle Monáe), it's necessary to tweak a few details for the sake of a more poignant narrative. Some staunch history buffs are likely to be aggravated by this, but it's a common practice in fiction storytelling. It's essential for giving Mrs. Vaughan the recognition she deserves as the first African-American woman in such a position and portraying some of the obstacles she faced, such as being undervalued by Vivian Mitchell (Kirsten Dunst). Her actions led to also being the first in teaching herself complex computer programming and then teaching it to her coworkers, saving the jobs of other women under her supervision. 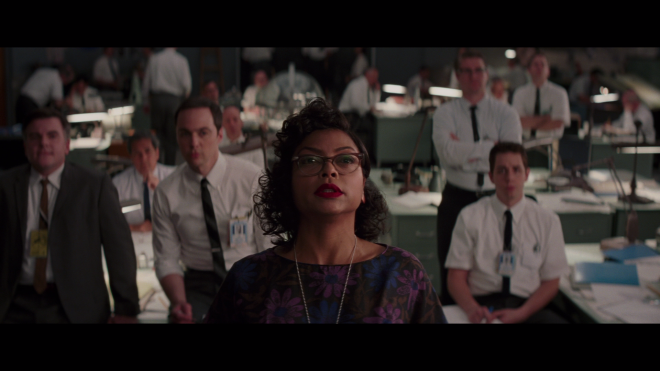 Meanwhile, Monáe delivers a surprisingly moving performance as Mrs. Jackson, the aerospace engineer who also marked a first just a few years shy of when this plot takes place. Not only fighting her employers but the system at large, there is a genuine feeling of misery and disappointment in Monáe's eyes as she argues for the right to advance her education at a time when segregation stood in her way. In a span of a couple years, the singer/songwriter-turned-actress has demonstrated a commanding talent in front of the camera. However, the standout of the entire cast is Henson as Mrs. Goble Johnson, on whom most of the plot orbits and the primary reason for the drama being situated in 1961. Her advanced calculations plotted the trajectories, launch windows and navigational charts for the astronauts' missions of the entire year. And during that time, she not only endured the eyes of racial discrimination from fellow engineers like Paul Stafford (Jim Parsons), but she had to also overcome the painful judgments of being a woman. Henson's harrowing portrayal is as heartbreaking as it is satisfying, particularly when displaying her gift in a boardroom full of men.

And in spite of all these minor changes to real-life events so that audiences better grasp the significance of these women's achievement during the Jim Crow era, director Theodore Melfi (St. Vincent, Going in Style) nonetheless calculates formulaic devices into the equation. While Dunst and Parsons play the typical silent white gaze coldly staring at these women as a threat to the status quo, Kevin Costner joins the cast as the familiar white savior trope in Alan Harrison, the director of the space program, and all three are fictional characters. Pointing this out is not meant as a fault to the production, quite the contrary because they encapsulate the thinking and sentiments the ladies struggled against. Rather, it's to simply show that for all its positives, Hidden Figures tends to rely on some cliched hurdles worth noting. Nevertheless, the bio-drama remains a harrowing tale of overcoming a system and culture that normalizes discrimination. Given the current political climate that sometimes feels as though in danger of repeating history, Melfi's film is the feel-good story we need for uniting all people in celebration of the accomplishments made by these ladies.

20th Century Fox Home Entertainment brings Hidden Figures to Blu-ray as a two-disc combo pack with an UltraViolet Digital Copy. The Region Free, BD50 disc sits comfortably opposite a DVD-9 inside a blue, eco-cutout case. A couple skippable trailers and promos later, viewers are taken to the standard menu screen with full-motion clips and music playing in the background.

The beautiful ladies demonstrate their engineering wizardry on Blu-ray with the help of a lovely, often stunning 1080p/AVC MPEG-4 encode.

Shot in Super 16mm and traditional 35mm film, the presentation is an interesting mix of varying levels of resolution in conjugation with vintage stock footage. Amazingly, this doesn't distract from assessing the picture quality, which displays razor-sharp details in the space capsule, the random office equipment, and various other items decorating the walls of the NASA buildings. The lettering and numbers written on chalkboards are legible even from a distance, viewers can plainly make out the fine lines in the furniture and wood paneling, and facial complexions are continuously revealing with lifelike textures in the entire cast.

Presented in a 2.40:1 aspect ratio, the freshly-minted transfer also displays spot-on contrast with crisp, brilliant whites throughout, providing the video with a brightly sunny appeal that keeps the narrative upbeat and uplifting even during the more worrying sequences. Brightness levels are rich and true, delivering pitch-black shadows that penetrate deep into the screen without sacrificing the finer details and giving the image an appreciable depth. Primaries are vibrant and full-bodied, particularly the blues in the skies and clothing and the greens of surrounding foliage, while secondary hues appear accurate and cleanly rendered. With an ultra-fine layer of grain showering every scene, the high-def presentation is gorgeous and film-like.

The biographical drama also debuts with an excellent DTS-HD Master Audio 7.1 soundtrack that surprises on several occasions. Although rear activity is largely silent, the speakers are employed in a few choice sequences where a variety of subtle discrete effects generate a pleasing soundfield. The room sometimes fills with the local wildlife, the chatter of people at a church gathering, the busy commotion of a NASA office or the electronic bustle of machines in the background. But often, the surrounds are reserved for the musical score to engage and envelop the listener.

The lossless mix's best feature is really in the front soundstage, which feels broad and welcoming with superb fidelity and acoustical detail. Thanks to an incredibly extensive mid-range, the original music of Hans Zimmer, Pharrell Williams and Benjamin Wallfisch creates an engaging wall of sound with superb distinction in the orchestration, which nicely bleeds into the front heights when engaging the receiver's DSU function. Channel separation and balance are outstanding with off-screen activity that's terrifically convincing, providing the design a splendid sense of presence, and dialogue is pristine and precise from beginning to end. Although the low-end isn't particularly demanding, bass is surprisingly palpable with appreciable weight in the music while also digging into the ultra-low depths during the explosions of rocket ships taking off, which bassheads are sure to love.

Audio Commentary: Director and writer Theodore Melfi sits with star Taraji P. Henson for a somewhat monotonous but nonetheless informative conversation where the two share some thoughts on the story, the performances, working with the rest of the cast and the production.

It All Adds Up (HD, 42 min): A five-piece short documentary detailing the making of the film through a variety of cast & crew interviews, BTS footage and some background history of the real story.

No Limits – The Life of Katherine Johnson

The Right People for the Job

A Spiritual Journey – The Music of the Film

Hidden Figures: Filming in Georgia (HD, 5 min): A tour through the shooting locations.

The biggest surprise sleeper hit of the year earning well-earned accolades and nominations, Hidden Figures tells the story of the important contributions made by three women in the NASA program during the height of the Cold War. With outstanding performances all around, the biographical drama is the feel-good story we need for uniting all people in celebration of the accomplishments made by these ladies. The Blu-ray lands with an excellent video and satisfying audio presentation. The supplements are a bit on the light side, but the overall package is nonetheless recommended.

Sale Price 11.99
List Price 16.99
Buy Now
3rd Party 3.5
In Stock.
See what people are saying about this story or others
See Comments in Forum
Previous Next
Pre-Orders
Tomorrow's latest releases