We have a game review for you. Please check it out and follow the forum thread at the bottom of this page to share your thoughts.

Activision is no stranger to releasing successful, war-based first person shooters if Modern Warfare 2 is any indication. It sold in the neighborhood of 20 million copies by June 2010, thus I'm sure everyone at Activision is elated that Treyarch finished development on Call of Duty: Black Ops. The presentation takes place between 1961 to 1968 and puts the player into the boots of Alex Mason, a soldier that had a key role in the Bay of Pigs operation. At the start of the story, Mason is being interrogated by an unknown person and the game launches into how Mason got to this point. The pacing of the Cold War plot progression is fantastic and mostly centers on the acquisition of a chemical weapon created by the Soviets called Nova-6. Similar to Modern Warfare 2, there are some fantastic, bombastic action scenes in the game that bring that movie-level quality to the presentation.

However, there are few changes to the core structure of the single player gameplay. This isn't an open world game and you are forced into a single path to complete each level. The control system is also identical allowing for the character to stand, run, crouch or go prone. Damage is handled with the typical red screen flashing and regeneration occurs when the player is behind cover. You are still jumping around into the perspective of different soldiers between levels and the artificial intelligence of the enemy soldiers is still fairly stupid.

Where Treyarch attempts to make their mark in the CoD franchise is in new weaponry, the ability to actual control vehicles and the occasional interlude into different gameplay styles like controlling a squad of players or blowing a nasty rocket out of the sky with some heavy duty firepower. My favorite new weapon is the Dragon's Breath, a shotgun that fires pyrotechnic rounds and setting enemies on fire. There's also a phenomenal crossbow with a giant scope for a more silent entry. Although, the standard assault rifle / SMG combo seems to be just as effective for taking down the opponents. Vehicles include bikes, cars, boats and even choppers. The path is still linear, but controlling the direction of the vehicles rather than simply being the gunner offers the illusion of control.

The trophies included for the PS3 version offer a variety of both single and multiplayer achievements for players to earn. It's a decent balance of simple bronze tasks (like escaping Vorkuta or silently killing 3 VC) to the much more difficult silver and gold tasks (like entering the Soviet relay station undetected or completing the entire campaign on veteran difficulty). There are plenty of trophies to keep both casual and more hardcore players replaying levels, if they are into collecting achievements.

Treyarch also makes their mark with the creation of the CoD points system. Similar to the Modern Warfare series, the player builds up the XP on their online character through succeeding in online matches. XP is used to level up their character and unlock new equipment. While Black Ops still has XP, it also has a challenge system that awards CoD points as well as a contract system that allows you to complete mercenary-style tasks. You do have to purchase the contract, but the rewards are much greater if you complete them during the match or series of matches. These points can unlock even better equipment and a much more extreme level of customization such as adding clan tags to your clothing / weapons. You are also awarded 1000 CoD points after your solider levels. 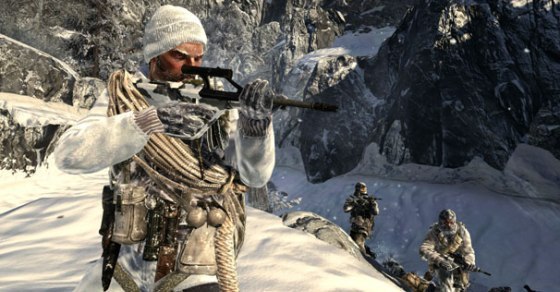 More importantly, you can actually wager the CoD points on matches that you compete in. You can finally bet on your own skill level and reap the rewards if you can finish in the top three players. Otherwise, you are wasting your points on the buy-in. My favorite is Gun Game, a mode that levels you up in weaponry depending on your kill streak. Kill someone with a pistol and you get to setup up to a rifle. Alternatively, you lose a level of weaponry when you are killed. Another great mode (almost definitely inspired from Goldeneye) is One in the Chamber. A single shot kills a player, but you only have one bullet. It often results in a game of cat and mouse while watching the other players duke it out with knifes. Other modes include Sticks and Stones (players killing each other with knifes / tomahawks) and Sharp Shooter (switches up everyone’s weapon at a preset time).

There's also a combat training mode in multiplayer that's extremely helpful for starting players not used to the fast paced (and often vulgarity laced) speed of online multiplayer. You can team up with a friend to take on teams of bots and earn more CoD points to spend. In regular multiplayer, you will find the usual suspects: Deathmatch, Team Deathmatch, Headquarters and Domination. Level design is near perfect in regards to preventing camping or providing a small number of solid hiding spots for snipers. There are even cute instances like Nuke Town, a 50's style housing settlement that gets a nuke dropped on it at the end of each match. Don't expect to escape in a fridge though. That's just ridiculous.

If you are a statistical guru, Combat Record offers a plethora of information to digest after your latest round of multiplayer. The stat tracking system is unlocked after level 10 and offers information about your kill shots as well as rate of deaths. It's excellent analysis for picking upcoming weapons that you want to unlock. Are you a master with head shots armed with a basic pistol? Perhaps a new sniper rifle is in your future. My forte was plugging my foes in the midsection, so future upgrades to the shotgun was a better choice for me. 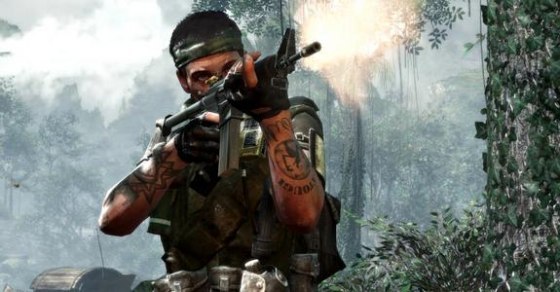 In addition to the multiplayer modes, you can also jump into a 2 to 4 player co-op mode called Nazi Zombies (similar to CoD: World at War). You basically fight off endless waves of zombies with your friends and try not to become one of the undead. The level variety here is pretty phenomenal, not to mention highly entertaining. It makes for a great break from competing for XP / levels and I often found myself logging on just to play a few rounds of Nazi Zombies.

In relation to online performance, I found myself in a smooth match about 80% of the time and lag issues in the remainder. Possible problems could be the massive user base that's playing already. On the Call of Duty: Black Ops website, you can check out the server load before you start playing. At the moment of this review, it's at Defcon 4 (one step away from a full load). I had the occasional dropped connection on matches, but nothing major to detour me from continuing to play and build up my online soldier. You can also upload multiplayer clips from your most recent matches into the in-game theater and these can be watched on the Call of Duty website as well as shared with friends. It would have been nice to be able to upload to Youtube though.

With the exception of a few low resolution, muddy textures and minor clipping issues, Treyarch's ability to deliver a rock solid, smooth graphics engine in Call of Duty: Black Ops is fantastic. Character animation is fluid and I didn't have any object detection issues when firing the wide array of weaponry. The game environments are vastly more varied than previous CoD games and the fire effects are stellar as always with Treyarch's proprietary engine behind it. This game is vastly gorier than previous CoD titles as well, if gratuitous digital blood floats your boat. One quibble, Black Ops doesn't not run in 1080p native. I'm not surprised, considering the graphical power required for 1080p native. The engine runs in 720p which can be upscaled to 1080p. The PC version, however, is capable of 1920 by 1080 resolution. 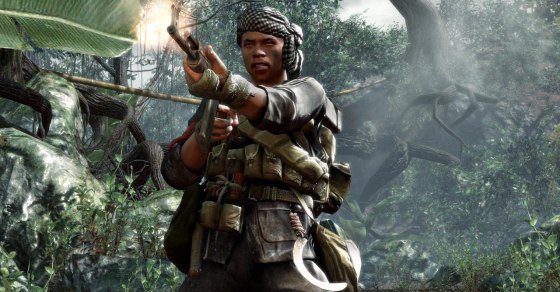 Treyarch's effort to bring 3D to the masses hasn't gone unnoticed, but the execution is lacking. Within the main menu, you will find a toggle to turn on the 3D visuals in the options menu. This will turn on the 3D output to HD Televisions that use active-shutter, stereoscopic 3D. PS3 owners that already downloaded the 3D update are likely aware, but your TV needs to support the 'over-under' / 'top-bottom' 3D mode. Put on your glasses that came with the TV and you are ready to go. The problem with 3D performance is that it ravages the framerate and actually rips you out of the presentation with occasional graphical glitches. The experience is less involving (with some exceptions of the game's larger plot crescendos) than playing in 2D unfortunately.

A spectacular A-List voice cast comes along with Call of Duty: Black Ops. While Clash of the Titans Sam Worthington was only mildly successful at voicing Alaskan native Alex Mason, the game's audio is bolstered by the performances of the brilliant Gary Oldman as Sgt. Reznov, Ed Harris as CIA Agent Jason Hudson and even Ice Cube's Corporal Bowman. Listen carefully and you will also hear some of the more minor characters voices by Topher Grace (Predators, That's 70's Show), Eddie Cahill (CSI:NY), David Conrad (Ghost Whisperer) and Entourage's Emmanuelle Chriqui. Not only does the Hollywood voice talent pull off excellent line delivery, Treyarch's ability to stitch the lines together into a flowing conversation worked perfectly.

The game's score was composer by Sean Murray, a veteran in creating film & gaming scores. He also created the scores for Call of Duty: World at War, the last two True Crime games and several episodes of Buffy the Vampire Slayer in the late nineties. The original parts of the soundtrack captures the drama happening on the screen with much aplomb, but the licensed music borders on cliche. The sound effect work is equally as good, especially with a finely tuned sound system. It's much easier to identify where bullets are coming from by using your ears rather than your eyes, specifically great in multiplayer.

The narrative in the single player campaign shows how much Treyarch has grown in their ability to tell a compelling story. While the plot lacks the implied urgency of preventing nuclear devastation in Modern Warfare 2, they finally pulled of the right balance of character development and the action-infused fast pacing of their previous titles. My only problem with the narrative were the forced use of key political figures in the game, but the final act pulls everything together extremely well and revisits key plot points earlier in the game surrounding JFK and others.

You are looking at about 6 to 10 hours of gameplay in the entertaining single player campaign, depending on your difficulty level. Add in the expansive, extremely addictive multiplayer and I'd be amazed if you weren't still playing Call of Duty: Black Ops six months from now. The improvements around online character building and wagering between matches are going to delight Modern Warfare fanatics. If you have any interest in first person shooters, I recommend joining the other 4.5 million people that preordered Black Ops and start building up your online soldier today. Highly Recommended

Sale Price 43.25
List Price 49.99
Buy Now
3rd Party 43.25
In stock. Usually ships within 2 to 3 days.
See what people are saying about this story or others
See Comments in Forum
Previous Next
Pre-Orders
Tomorrow's latest releases