At times, 'Stanley & Iris' feels more like an extended public service announcement than an actual film. Although it tenderly and perceptively addresses adult illiteracy in America (and back in 1990 shined a beacon on the problem), the drama's altruistic, social issue focus often overshadows its more interesting, emotional story. For beneath its primers, worksheets, and tutorials, 'Stanley & Iris' is just what its title advertises — a simple character study of two average people. And on that level, it largely succeeds.

Iris King (Jane Fonda), a recently widowed mother of two, toils on the assembly line of a New England bakery. Plagued by grief, economic problems, a rebellious teenage daughter (Martha Plimpton), and the bickering of her live-in sister (Swoosie Kurtz) and brother-in-law (Jamey Sheridan), Iris struggles to keep her life on an even keel. When she becomes the victim of a purse snatching on a local bus, good samaritan Stanley Cox (Robert De Niro) comes to her aid. Iris quickly discovers Stanley also works at the bakery (as a cafeteria chef), and the two strike up a casual friendship. As they spend more time together, Iris wonders why Stanley lives alone with his elderly father and seems mired in a succession of odd jobs. Soon, however, the pieces fall into place, and she learns Stanley's mortifying secret — he's functionally illiterate.

At first, the revelation strains their relationship, but after his father dies, Stanley realizes the severity of his handicap and how it prohibits him from standing on his own. He begs Iris to teach him to read, and during the subsequent lessons, Stanley not only learns the mechanics of grammar, he also learns about his instructor. And over time, he returns her favor by teaching Iris how to move past her husband's death and move on with her life.

On its own, 'Stanley & Iris,' despite restrained and astute direction from the esteemed Martin Ritt, never rises above TV-movie status, and although illiteracy doesn't exactly qualify as a disease of the week, the bromide-filled screenplay exhibits many of the genre's clichéd elements. Yet in the hands of Fonda and De Niro, the material comes alive, and the stars' natural portrayals infuse the film with a sensitivity and believability it otherwise might not have enjoyed.

On paper, the pair seems strangely mismatched. Fonda may be only six years older than De Niro, but it seems as if she comes from a previous generation. She's a holdover from the old Hollywood, while he's a standard-bearer of the new, and their acting styles reflect that difference. Yet because they play an odd couple on film, their contrasting methods somehow mesh, adding realism to their scenes together and keeping the picture afloat during dicey stretches.

Rarely has Fonda acted with less affectation. With little makeup, a dowdy hairstyle, and a discount wardrobe, she fully inhabits her lower-middle-class role, making us believe she's a frazzled, worried, aging woman who can't face starting anew. Though at the time Fonda was perhaps better known as a fitness guru and trophy-wife-to-be to media mogul Ted Turner, she's always been first and foremost an actress. And 'Stanley & Iris' reminds us what a good one she can be.

De Niro equally impresses, often achieving a heartbreaking melancholy that goes far beyond what's written in the script. As he's aged and gravitated more toward comedic roles, De Niro has adopted an unfortunate Jack Nicholson quality, making it difficult for audiences to divorce his persona from his screen roles. But 27 years ago that wasn't the case, and De Niro loses himself in Stanley, beautifully embodying the pride, shame, and vulnerability associated with illiteracy. He makes us not only empathize with Stanley's plight, but also understand the intense stress and fear the disability causes.

Ritt traverses familiar territory, focusing once again on the struggles of the working class with his trademark insights and gentle touch. The factory setting is reminiscent of his previous 'Norma Rae,' while the character driven story recalls such similar Ritt efforts as 'Hud,' 'Sounder' and 'Murphy's Romance.' Although the final third of 'Stanley & Iris' lags, and the overly pat, too-good-to-be-true ending (which some believe was tacked on to the film after it tested badly with preview audiences) leaves a sugary aftertaste, Ritt manages to make a bland subject palatable, involving, and ultimately uplifting.

Sadly, the film would prove to be his last. Ritt died shortly after completing the movie, and in retrospect, it seems appropriate that a man who specialized in socially relevant, deeply human, and deceptively simple films was able to end his career with one. 'Stanley & Iris' may not be a masterwork, but it's a fitting and respectable finale for this acclaimed craftsman. 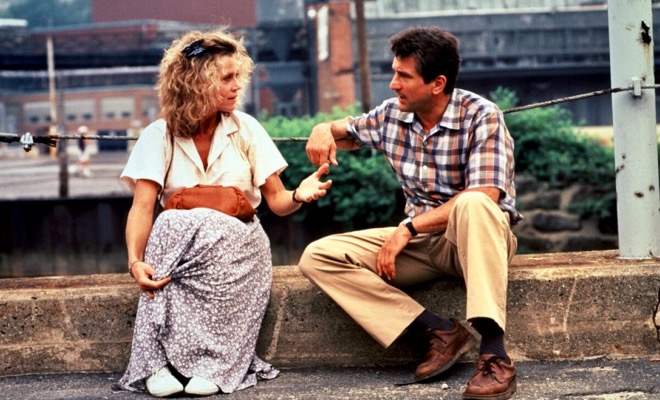 'Stanley & Iris' arrives on Blu-ray in a limited to 3,000 edition packaged in a standard case. An eight-page booklet featuring an essay by film historian Julie Kirgo, color scene shots, and a reproduction of the movie's poster art is tucked inside the front cover. Video codec is 1080p/AVC MPEG-4 and audio is DTS-HD Master Audio 2.0. Once the disc is inserted into the player, the static menu without music immediately pops up; no previews or promos precede it.

The 1080p/AVC MPEG-4 transfer doesn't look much different than the 2004 DVD. Solid clarity and contrast, a natural grain structure, and a largely pristine source print that's dotted with just a few errant nicks distinguish this fine rendering that also boasts an inviting and surprisingly vibrant color palette. Black levels are rich and deep, good shadow delineation keeps crush at bay, and flesh tones remain accurate and stable throughout. Sharp close-ups don't hide the lines in Fonda's careworn face, yet they also lend her a striking luminosity that beautifully softens her persona. In fact, the entire film, despite its rather grungy settings, exudes the warm glow of old-fashioned Hollywood, which is quite appropriate for a love story starring two legends. Though this transfer isn't a huge step up from the previous DVD, it's still a first-class effort, and fans of Fonda, De Niro, and this low-key romance will certainly find the mild enhancements pleasing.

The DTS-HD Master Audio 2.0 stereo track features a good deal of distinct front-channel separation, which nicely widens the soundscape. Full-bodied, well-modulated tones lend the track an excellent sense of presence, and a wide dynamic scale handles all the highs and lows without a hint of distortion. Subtleties like the crinkling of paper and crunching of egg roll wrappers come through well, and all the dialogue is clear and easy to comprehend. Fine fidelity and tonal depth enhance the understated John Williams score, and no age-related hiss, pops, or crackles intrude. Though far from showy, this track has more meat on it than one might expect, which helps boost the disc's appeal.

'Stanley & Iris' is far from a great film, but the well-crafted performances of Fonda and De Niro and Martin Ritt's sensitive direction make it worthwhile. Sure, this tale of two lonely people who help each other over their respective personal hurdles can be preachy and saccharine at times, but how many issue-oriented love stories aren't? Twilight Time's Blu-ray presentation doesn't offer much in the way of extras, but features solid video and audio transfers that help immerse us in the drama. Those who enjoy fine acting and tender storytelling should give this underrated film a try. It features some lovely moments and is definitely worth a look.