Two for the Road

Before 'Two for the Road,' Audrey Hepburn specialized in playing insecure debutantes, waifs, and shy, impressionable women. But Stanley Donen's incisive, episodic portrait of a disintegrating marriage unveils a new Audrey — confident, mod, even a little sassy. For the first time, Hepburn laces her line readings with a cynical edge, and a hint of disillusionment and ennui clouds her demeanor. The effect is irresistible, altering our perception of the actress and adding an element of mystery and complexity to her screen persona. No one would ever call Hepburn earthy, but in 'Two for the Road' she at last leaps off her celestial pedestal and becomes flesh and blood. Gone is the manufactured movie star impeccably draped in Givenchy couture and coiffed and coached by Hollywood's elite. This is the real Audrey, the natural Audrey, full of passion, fire, and reckless abandon. And the change seems not only to liberate her, but also inspire her to file one of her finest and most resonant portrayals.

In its day, 'Two for the Road' was a bold, adult tale told with flair and innovation. Donen and screenwriter Frederic Raphael ('Eyes Wide Shut') cleverly play with time — flashing back, jumping slightly forward, reverting to the past, leaping to the present — as Mark and Joanna Wallace (Albert Finney and Hepburn) reflect on their troubled 12-year marriage while traveling through the French countryside. Rapid edits brings us in and out of memory fragments, and we see the characters in the same locales during different periods of their lives — forging a relationship, in the fresh bloom of newfound love, battling boredom, adjusting to changing needs, and juggling the demands of a burgeoning career and family. The device is both visually and thematically exciting, and the bumpy ride, punctuated by unexpected twists and turns, mirrors the rockiness of the Wallace marriage, which is plagued by lapses in trust, underlying restlessness, and psychological turmoil. Like an aimless scenic drive, 'Two for the Road' pleasantly meanders, but the seemingly pointless detours all connect to the film's very pointed message...that marriage is a long-distance trip over often challenging terrain that requires deft navigation and steadfast commitment to weather the potholes, pass the milestones, and stay on track.

Donen expertly juggles moments of slapstick comedy and playful romance with searing arguments and frigid silences, creating an ebb and flow to Mark and Joanna's relationship that's both natural and relatable. For those of us who are married (and I'm going on 29 years), 'Two for the Road' is the type of film that's easy and fascinating to revisit as our own marriages mature. (I last saw the film about a decade ago and it spoke to me differently now than it did then, fostering within me a greater appreciation and respect for the institution of marriage and the discipline and patience required to successfully sustain it.) Without adopting a preachy or judgmental tone, Donen depicts the high points, pitfalls, niggling annoyances, and emotional codependency of long-term unions, and in so doing, allows us to see bits and pieces of ourselves in both characters.

Hepburn and Finney beautifully click, and their comfortable chemistry makes it easy to believe in their on-screen marriage. (The pair reportedly had an affair during filming, which may account for the heightened intimacy they convey.) Whether they're sniping, giggling, pouting, cooing, or trading both good-natured and hurtful barbs, they're always genuine, and that inherent authenticity helps ease the artifice of certain situations. Hepburn looks so relaxed and radiant (much of her wardrobe is typically breathtaking), it's difficult to concentrate on anyone or anything else while she's on screen, but Finney exudes a robust enthusiasm and seething intensity that forces a shared focus. The actor hasn't often played romantic leads during his long and fruitful career, but Mark is far from the typical Hollywood stud, and the character's self-absorption and insensitivity allow Finney to craft a provocative portrayal. And if Hepburn's beauty isn't enough, a young and equally stunning Jacqueline Bisset pops up early on to flirt with Finney and grab our attention.

Unfortunately, the greatest strength of 'Two for the Road' also becomes its prime weakness. The rich subtleties of character that ever-so-gradually add layers to the Wallace marriage and allow us to intimately relate to Mark and Joanna are rarely supported by strong plot points. Raphael's Oscar-nominated script often nails the essence of commitment with a few choice words, but the situations seesaw between the sublime and ridiculous, at times undermining the emotional honesty that so eloquently pervades the piece. Maybe that's the nature of comedy-drama — and marriage — but it's also the genre's Achilles heel. Saddling Mark and Joanna with a couple of idiosyncratic and thoroughly insufferable American traveling companions (wonderfully played by Eleanor Bron and William Daniels) and their obnoxious spoiled daughter (Gabrielle Middleton) injects some comic zing into the film, but doesn't really embellish the Wallace relationship. Tightening such episodes would preserve the film's genial flow while sharpening its bite.

At the time of its premiere, 'Two for the Road' probably seemed like a potent slice of connubial life, but Hollywood has since produced far more brutal marital portraits (Finney's own 'Shoot the Moon' quickly comes to mind), thus diluting the impact and dulling the edge of Donen's film. But few movies depict the emotional turbulence of a romantic relationship and challenges of a long-term marriage more astutely and naturally than this captivating portrait. Although time may have slightly upset the film's delicate balance, there's still a lot to love about it. The terrific performances, stylish direction, adult subject matter, lush French locations, and marvelous Henry Mancini score all combine to create a seductive, languorous mood that allows us to ease beneath the surface of Mark and Joanna's marriage, and perhaps, later on, our own. Traveling with this couple isn't always easy, but their journey instills in us a degree of comfort and faith in our own chosen paths that's both uplifting and inspiring. 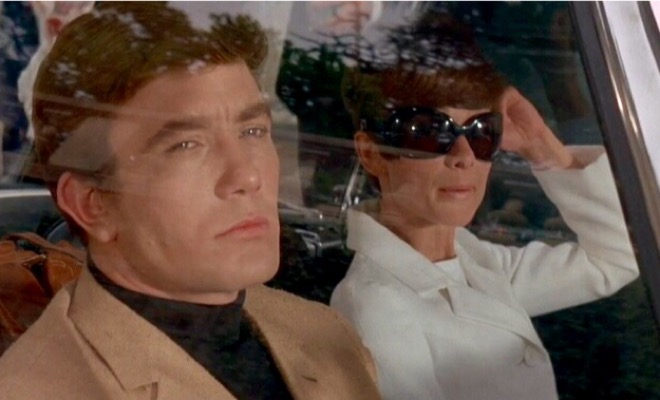 'Two for the Road' arrives on Blu-ray in a limited to 3,000 edition packaged in a standard case. An eight-page booklet that includes an essay by Julie Kirgo, a few color photographs of Hepburn and Finney, and a reproduction of the film's poster art is tucked inside the front cover. Video codec is 1080p/AVC MPEG-4 and default audio is DTS-HD Master Audio 2.0 mono. Once the disc is inserted into the player, the static menu without music immediately pops up; no previews or promos precede it.

The DVD version of 'Two for the Road,' following a much ballyhooed restoration, sported a breathtaking transfer, but this 1080p/AVC MPEG-4 rendering improves upon even that impeccable specimen. The image is so clear and vibrant, you can almost feel the breeze off the Mediterranean and the stifling sun of Provence on your back. The bits of frustrating softness and mild print imperfections that plagued the DVD have vanished, leaving a pristine picture that maximizes contrast, color, and depth. Hues are deep and beautifully saturated, especially the red sweater Hepburn dons throughout many early scenes. Shadow delineation is excellent, and the reflections of passing scenery on the car windows possess almost as much detail as the close-ups inside the vehicle. Flesh tones are stable and natural; Hepburn's creamy complexion in some scenes suggests unblemished youth, while her rich olive tan in others denotes the sophistication and economic security of middle age. Black levels are rich and deep, whites are crisp, and just a hint of grain heightens the movie's natural look while maintaining an essential film-like feel. A couple of early scenes appear a tad too bright, but that's the only hiccup of this top-flight transfer that honors the beauty of Hepburn, Finney, and France.

Just like the previous DVD, two audio tracks are included, but they've been upgraded here to high-def standards. Both the DTS-HD Master Audio 2.0 stereo and 1.0 mono tracks supply clear, well-modulated sound, although I needed to increase the volume on my system beyond normal Blu-ray listening levels. Composer Henry Mancini's lilting score exudes a lovely resonance, complementing the action without overwhelming it. Dialogue is properly prioritized and easy to comprehend, and a wide dynamic scale handles all the highs and lows with ease. Stereo separation is faint at best on the 2.0 track, but it provides a slightly more enveloping experience than its mono counterpart, and both tracks are free of any annoying age-related imperfections, such as hiss, pops, and crackles.

A couple of new extras complement a couple of old ones that have been ported over from the previous Fox Studio Classics DVD edition. Sadly, the still gallery is gone, as is the before-and-after restoration comparison.

Marriage is a timeless institution, so it's not surprising Stanley Donen's insightful and realistic examination of it holds up quite well a half century after its initial release. 'Two for the Road' seamlessly combines comedy, drama, sexual sparring, and interpersonal angst with the French countryside, impeccable style, and superior performances by Audrey Hepburn and Albert Finney as a jaded couple contemplating divorce. Twilight Time's Blu-ray presentation improves upon the previous DVD, thanks to excellent video and audio transfers and a couple of new supplements. Hepburn fans will especially want to add this disc to their collection, but any married couple, be they happy, sad, or somewhere in between, will relate to this perceptive portrait of love and commitment. Highly recommended.