Love in the Afternoon

She plays the cello. He plays the field. She's coltishly young. He's worldly and mature. Lovestruck conservatory student Ariane knows she's not like millionaire American playboy Frank Flanagan. But if she pretends to be just as much a cosmopolitan lover as he is, maybe the magic of l'amour will take hold.

May-December romance is in bloom when Billy Wilder directs and Audrey Hepburn and Gary Cooper meet for Love in the Afternoon. Laughs, Parisian settings, champagne elegance - Wilder, in his first collaboration with long-time co-writer I.A.L. Diamond, delivers them all in soufflÃ©-light homage to his filmmaking idol Ernst Lubitsch, punctuating it by casting Lubitsch alumnus Maurice Chevalier, the cinema's ambassador of Gallic charm who smoothly plays Ariane's detective father.

"You know who I am, Mr. Flannagan. I'm the girl in the afternoon. The aperitif, as they say on the Left Bank."

Hollywood, for some strange reason, loves May-December romances. Maybe it's because most movie executives are older men who'd like to believe impressionable young women prefer a dapper, distinguished, and intelligent gentleman over an immature, self-absorbed stud closer to their own age. It's a lovely fantasy, to be sure, but unless there's an exhorbitant amount of money involved - or a deep-seeded daddy issue - such relationships rarely work on screen. They can also seem a bit creepy if the chemistry between the two leads isn't quite right.

And that's exactly the case with Billy Wilder's 'Love in the Afternoon.' All the ingredients for a wonderful romantic comedy are here - a clever script, impressive cast, top-notch director, impeccable production values, and a Parisian location - but somehow Audrey Hepburn and Gary Cooper never quite click. And because they don't, the rest of the film doesn't work either. Wilder's light touch and deft comic flair notwithstanding, 'Love in the Afternoon' is a tiresome trifle that lingers too long and only sporadically sparkles.

Ariane Chavasse (Hepburn) is a naïve French cellist who studies at a Parisian conservatory and lives in a humble flat with her father, Claude (Maurice Chevalier), a wily private detective who specializes in exposing adultery. The lascivious exploits of Frank Flannagan (Cooper), a bon vivant American businessman (Cooper) whose list of illicit liaisons is legendary, obsess Claude, who keeps a voluminous file on Frank and often camps outside the famed Ritz Hotel to snap pictures of him and his various paramours. When Claude shows his evidence to one jealous husband (John McGiver), the shocked and distraught man vows to kill Frank. The impressionable Ariane, who believes young men are "conceited, clumsy, and very unimaginative," overhears the discussion and feels compelled to warn this mysterious Don Juan - whom she has never met - about his impending death.

Ariane arrives at the posh Ritz suite in the nick of time and trades places with the unfaithful wife just before her furious husband barges in. Frank is grateful for her intercession, and becomes intrigued by this young, pretty, spirited lass, whom he dubs Thin Girl. The two agree to meet the following afternoon before he leaves Paris on a year-long business trip. Though all they share are a few innocent kisses, Ariane is completely smitten, and follows Frank's escapades in the gossip columns while he's away. When they run into each other by chance upon his return to Paris, Frank doesn't remember Ariane at first. After all, she was just one in an endless string of flings for such a worldly lothario. ("He who loves and runs away, lives to love another day" is Frank's mantra.) But after she jogs his memory, the two begin spending their afternoons together, and in an attempt to hold the interest of her dear Mr Flannagan, Ariane begins spinning fictional yarns about an array of prior lovers.

While Frank feels it's okay for him to play the field as much as he wants, the thought of his beautiful Thin Girl cavorting about with dozens of men and doing who knows what infuriates him. So much so, in fact, he decides to engage a private detective to find out who Ariane has been seeing. And, of course, that private detective just happens to be - you guessed it - her father.

'Love in the Afternoon' marked the beginning of a legendary writing partnership between Wilder and I.A.L. Diamond that would subsequently include 'Some Like It Hot,' 'The Apartment,' 'One, Two, Three,' and 'Irma La Douce,' among many others. Reportedly, the two sought to pay homage to the grand master of 1930s romantic comedy and Wilder's idol, director Ernst Lubitsch, but although their 'Love in the Afternoon' script expertly blends sophistication with innuendo, the truly risqué elements and broad misunderstandings that define Lubitsch's best work are absent. The censors wouldn't allow even the notion of impropriety between Frank and Ariane during their afternoon trysts, which really sucks the wind out of the film's sails. Consequently, any sexual tension between the two dissipates quickly, which leaves us with a rather dull, mostly platonic romance between an effervescent, lovely young woman and a stodgy old man.

And despite clever dialogue, fine performances, and inviting atmospherics, that mostly platonic romance tries our patience over the course of 130 minutes. Unlike other Wilder-Diamond collaborations, there's just not enough meat in the screenplay to justify such a hefty running time. A good 20 minutes easily could be cut from the movie, which would make it comparable length-wise to Lubitsch's films, none of which exceed 110 minutes and all of which zip along with more alacrity than this anemic effort. 'Love in the Afternoon' makes for a very long afternoon (or evening) at the movies, but you've gotta hang in there for the ending - a classic train station climax that's sure to put a lump in your throat. Wilder may fritter away the rest of his picture, but he nails this denouement.

And yet to be fair, it's Cooper who really spoils the whole enterprise. Though "only" 55 at the time of shooting (Hepburn was 27), he looks at least a decade older, and his stilted movement and abundance of wrinkles make him appear almost as aged as Chevalier (who was 68). When the lover and the dad look like contemporaries that really can nix an audience's acceptance of a romance, and that's exactly what happens here. Interestingly, Hepburn had just finished shooting the musical 'Funny Face' with Fred Astaire (30 years her senior) prior to starting work on 'Love in the Afternoon.' But Astaire's agility and energetic demeanor mask his age, making him seem much younger than Cooper. (Hepburn could be labeled the May-December poster girl, for she also co-starred with Humphrey Bogart [30 years older], Cary Grant [25 years older], and Rex Harrison [21 years older], all before she turned 35.)

There's a lot to like about 'Love in the Afternoon,' but its one-note presentation, one-dimensional characters, and miscast leading man keep this winsome romantic comedy from reaching its potential. As usual, Hepburn saves the day, filing another irresistible - if subdued - performance, and Chevalier is especially endearing as her protective father. Wilder supplies plenty of joie de vivre, but in the end, too much je ne sais quoi drags down the wispy material and leaves us feeling a bit insouciant about this pleasant but sterile love story. 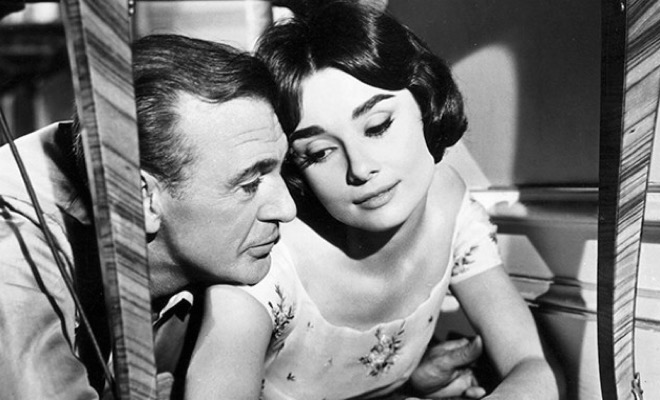 'Love in the Afternoon' arrives on Blu-ray packaged in a standard case. Video codec is 1080p/AVC MPEG-4 and audio is DTS-HD Master Audio 2.0 mono. Once the disc is inserted into the player, the static menu without music immediately pops up; no previews or promos precede it.

Warner Archive once again faithfully honors a Hollywood classic with a fresh and vibrant 1080p/AVC MPEG-4 transfer. The new 2K remaster benefits from strong clarity and contrast, rich black levels, crisp whites, and beautifully varied grays. Silhouettes - a trademark of cinematographer William Mellor - are especially striking, and the exterior scenes of Paris sport an authentic look. A noticeable layer of grain lends the image a slightly gauzy appearance (most likely intended to diffuse Cooper's weathered features), but the texture is pleasing overall and remains largely consistent throughout. Sharp close-ups showcase Hepburn's stunning bone structure and youthful complexion, but they also call greater attention to Cooper's baggy eyes and wrinkles, which emphasize his advanced age. Though a couple of errant specks dot the presentation, no digital anomalies or enhancements could be detected. 'Love in the Afternoon' exudes plenty of Parisian flavor, and this first-rate transfer puts us in the center of the Place Vendôme.

'Love in the Afternoon' is one of the quietest films I've ever seen. Most of the dialogue is spoken in civilized, matter-of-fact tones, and the soothing string quartet music only sporadically underscores the action. Nevertheless, the DTS-HD Master Audio 2.0 mono track supplies clear, well-modulated sound that faithfully renders all the elements. The music sounds warm and full, and all the conversations are easy to comprehend. The most notable sonic accent is an annoying yapping dog, and the track nicely exploits the jarring noise. Ambient effects are few, but distinct enough, distortion is absent, and no age-related hiss, pops, or crackles intrude. Though far from showy, this is a solid track that hits all the right audio notes.

The movie's original theatrical trailer (HD, 3 minutes) is the only extra included on the disc.

'Love in the Afternoon' is light, often charming, always elegant, but not bubbly and risqué enough to capture our fancy...or merit its bloated running time. Billy Wilder's May-December romantic comedy takes some pointed jabs at sexual mores, but its languorous pacing and stiff presentation sterilize the story. As always, Audrey Hepburn is beautiful and captivating, but she never quite clicks with an aged Gary Cooper, and without any sparks, there can be no fire. 'Love in the Afternoon' may fall short of expectations, but with remastered video and audio and plenty of talent on display, it's still worth a look for classic movie fans.

Sale Price 17.99
Buy Now
3rd Party 11.43
In Stock.
See what people are saying about this story or others
See Comments in Forum
Previous Next
Pre-Orders
Tomorrow's latest releases