From Illumination, the studio that brought you The Secret Life of Pets and the Despicable Me franchise, comes an animated comedy about finding the music that lives inside all of us. SING stars Academy Award® winner† Matthew McConaughey as Buster Moon, an eternally optimistic koala who puts on the world's greatest singing competition to save his crumbling theater; Academy Award winner Reese Witherspoon as Rosita, an overworked and unappreciated mother of 25 piglets desperate to unleash her inner diva; Scarlett Johansson as Ash, a punk rock porcupine with a beautiful voice behind her prickly exterior; Taron Egerton as Johnny, a young gangster gorilla looking to break free of his family's felonies; as well as Seth MacFarlane, John C. Reilly, and Grammy Award-nominated Tori Kelly. SING is the musical comedy event of the year!

In the anthropomorphic world of 'Sing,' the latest from Illumination Entertainment, talent exists in the most unusually normal of places, the unconventionally ordinary, the most uncommonly mundane. Audiences are immediately introduced to the musical ensemble of aspiring singers with sweeping camerawork that jumps from one location to the other with rapid urgency, brief little glimpses into their everyday lives revealing their singular circumstances with an air of the familiar. In the filmmakers' attempt to make each character unique, establishing a yearning for them overcoming their particular dream-crushing situations, there is also something very routine and customary about the plot. These are stock characters living clichéd lives where we know, within the first few minutes, each will triumph over their current state of prosaic affairs because they are ripe with a talent that guarantees fame and success. Adults will find little surprise in this CG feature, but for an animated musical geared at children, the formulaic structure makes for easy entertainment full of glitz and glamor.

Told in a parallel narrative structure where each character's background is given equal measure and weight, we meet the angst-ridden porcupine Ash (Scarlett Johansson) rocking on stage next to her boyfriend Lance (Beck Bennett), who wants the spotlight all to himself and doesn't allow her to shine. The leather jacket-wearing gorilla Johnny (Taron Egerton) is another teenage dreamer singing a tune while serving as lookout for his mobster father, who expects him to follow in the family business. Then, we zip to the other side of town in the suburbs where devoted housewife Rosita (Reese Witherspoon) cares for her twenty-five piglets and softly bemoans with melodious eyes of younger, bygone aspirations. Next, we scurry to the stairs of an elevated train to find cute but well-dressed mouse Mike (Seth MacFarlane) wailing on the saxophone but who later turns out to also be a talented crooner in the vein of Frank Sinatra. And finally, we meet shy elephant Meena (Tori Kelly) belting out Happy Birthday for her grandfather into a beautiful melody that'll play a bigger role later. 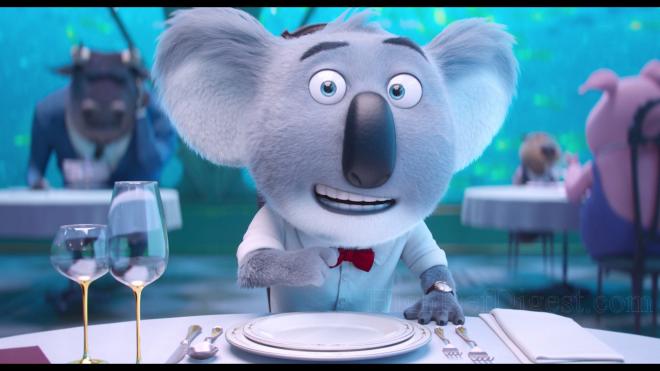 Bringing them all together is the brightly optimistic koala Buster Moon (Matthew McConaughey, not sounding anything like Matthew McConaughey), a theater owner in desperate need of a new act to save his dream of discovering and managing a famous singer. However, one thing never mentioned throughout the 110-runtime is the fact that discovering talent and turning it into a viable star is a talent in itself. And seeing as how every one of Buster's stage productions have been duds, this puts him in the precarious situation of perhaps admitting he doesn't have it and should more likely call it quits. Of course, in the universe of children's animation, this never becomes an option, even when it's brought to his attention several times he should permanently close the doors to the antique theater and move on. In spite of lacking the funds and in no way able to keep his promises, bringing other issues of dishonesty into play, Buster stages a singing competition opened to the public with a cash prize of $100,000. It's easy to guess how this disaster will end, but the little tykes in the room will nonetheless be mesmerized by every minute leading up to the big musical finale.

For the adults dragged into watching 'Sing,' the CG animated musical offers just enough humor and amusing escapades to keep this children's comedy on this side of watchability, in spite of its predictable premise. The movie's most endearing aspect, other than the 'American Idol'-esque opening, is the filmmakers peering into the lives of the characters and what each risks in the pursuit of their dreams. While others learn of the possibly harmful changes surrounding them, Meena's biggest challenge is herself, making her arguably the most charming of the ensemble. But more importantly, those glimpses give rise to a competitive energy as the story unfolds. Meanwhile, both Buster and Mike are essentially two halves of the same whole, or better yet, two animals digitally generated from the same ones and zeros. They're both surprisingly self-destructive and cocksure, seemingly unaware of how their actions affect others. These more mature subject matters make for an engaging plot while the visual humor keeps the laughter marching towards the inevitable happy conclusion where all disasters are easily resolved.

Universal Studios Home Entertainment brings 'Sing' to Blu-ray as a two-disc combo pack with an UltraViolet Digital Copy. A Region Free, BD50 disc sits comfortably opposite a DVD-9 copy of the movie. Both are housed inside a standard blue keepcase with a lightly embossed slipcover. After several skippable trailers, viewers are taken to an animated screen with full-motion clips and options along left side of the screen while Scarlett Johansson's "Set It all Free" plays in the background.

The animated musical debuts on the Blu stage with a phenomenally gorgeous and continuously stunning 1080p/AVC MPEG-4 encode.

Easily ranking as one of the best looking CGI features on Blu-ray, the presentation ignites the screen with a sumptuous palette that keeps the screen lively and upbeat. With a vibrant array of opulent primaries serving as backup vocals, much of the emphasis is on secondary pastel hues washing over the frame and making the whole show pleasing to the eyes. A well-maintained and pitch-perfect contrast adds a crisp, glowing punch to every scene, as the whites in the stage lights glitter and shimmer with passion. Rich, penetrating blacks provide a cinematic quality and a three-dimensional feel while tiny shadow details remain visible from beginning to end.

Framed in its original 1.85:1 aspect ratio, the presentation is also one of the most detailed of recent memory, exposing even the most minute and meticulous feature on the faces of characters. Hairs on the furriest of creatures seem to move independently of each other while the puffy, coarse wool of sheep appears lifelike and bouncy. The teeny-weeny bumps and nodules on the skin and noses of the animals are clearly distinguishable, adding another layer of realism to an already outstanding picture. The razor-sharp lines in the buildings, furniture and the clothing, particularly the worn and dry leather jacket of the teenage gorilla Johnny, will mesmerize viewers, making this a magnificent feast for the eyes.

Although the video presentation steals the spotlight, the Dolby Atmos soundtrack accompanying the performance holds its own with several showstopping moments. Naturally, the musical numbers take center stage, spreading evenly across all three front channels and generating a wide and expansive soundstage. Every instrument and note are delivered with crystal-clear clarity thanks to an excellent mid-range that maintains distinct detailing and fidelity even during the movie's loudest segments. The vocals never falter and always remain intelligible throughout, allowing listeners to enjoy the full depth and range in the talented singing voices. The low-end isn't particularly noteworthy or bombastic, but there is plenty of palpable bass, providing the music and few action sequences with weight and resonance.

The design also employs the surrounds and overheads on numerous occasions for creating a satisfying and often-immersive soundfield. The city is littered with various traffic noise and chatter in the distance, most of which is also scattered above the listening area for an amusing dome-like environment. The best scene, however, is when the theater floods, filling the entire room with the chaos of rushing water and the collapse of the building. Understandably, more attention is given to the music, which bleeds into the sides and rears while front and rear heights deliver an echo effect that feels as though listening to a live show inside an auditorium. The lossless, object-based mix doesn't really compare to the best tracks currently available, but it puts on one hell of a good show.

In the anthropomorphic world of 'Sing,' talent exists everywhere is apparently easy to find. Nevertheless, in order to save his theater, a koala sets the stage for bringing a talented ensemble cast of performers together and learn that with enough heart, dreams can come true. In spite of very predictable plot, the CG animated musical comes with enough charm and charisma to be entertaining. The Blu-ray debuts with one of the best video presentations of recent memory, along with a satisfying and engaging Dolby Atmos soundtrack. The supplements are much too brief, but it's enough for the kiddies to enjoy for hours of fun!

Sale Price 9.99
List Price 19.98
Buy Now
3rd Party 2.23
In Stock.
See what people are saying about this story or others
See Comments in Forum
Previous Next
Pre-Orders
Tomorrow's latest releases