When best friends Glen and Terry stumble across a mysterious crystalline rock in Glen's backyard, they quickly dig up the newly sodden lawn searching for more precious stones. Instead, they unearth The Gate — an underground chamber of terrifying demonic evil. The teenagers soon understand what evil they've released as they are overcome with an assortment of horrific experiences. With fiendish followers invading suburbia, it's now up to the kids to discover the secret that can lock The Gate forever . . . if it's not too late.

Let's thwart accusations of watching 'The Gate' through rose-tinted glasses of nostalgia by admitting that I mostly definitely am. To be perfectly honest, it's really the only way to enjoy and love a plot about two boys (Stephen Dorff and Louis Tripp) accidentally opening a portal to an underground layer of little, lizard-like minions. And every time those vicious monstrosities make an appearance, it's either done with the magic of stop-motion photography, which always brings a smile to my face, or live-action with actors in body suits running a stage with oversize furniture. Best of all, heavy metal music, which the older of the two Terry (Tripp) happens to be an admirer of, offers the only known solution for closing the portal and defeating the evil spirits back to the pit from whence they came. The real winner, it turns out, is actually science by means of a rocket Glen (Dorff) has been saving to launch with his older sister Al (Christa Denton). It's a metaphor for each other's love and sibling bond, or some such nonsense.

The whole thing is laughably silly, deep-fried in several layers of cheese and sprinkled with heart attack-inducing schlock. I know it's bad for you, but it tastes so damn good. It's a guilty pleasure that hits the spot, right down to the very last bite. There's really no other way to cherish the low-budget Canadian production than through the lens of nostalgia, reminiscing on memories of my youth. While watching, I longed — and even admired — for the days when movies targeted at young adults weren't riddled with a barrage of continuously pointless action, marred by suspenseless jump scares or infested with nauseatingly shaky camera movements that never let audiences simply be immersed in the supposedly spooky atmosphere. Director Tibor Takács, who later when on to director 'I, Madman' but sadly, not much else of note since, doesn't do anything particularly fancy, but he and cinematographer Thomas Vámos display a confidence in allowing viewers to take in the scene and see the danger character's confront. 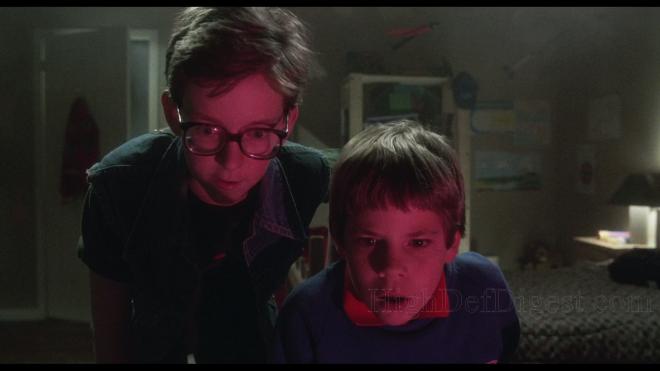 These were also the days when filmmakers relied on simple, straightforward plots with genuinely relatable situations that challenged our protagonists, giving them an obstacle to overcome. For Glen, this is the ever-growing distance between Al and him, their age-gap becoming more apparent as her teenage interests expand into hanging out with friends, partying and boys. Their first weekend alone with the parents away and sixteen-year-old Al in charge sets the stage for testing their bond. And as we'd expect, they spend a good deal of time bickering at one another and treating Glen like an over-imaginative child when the boys try to fix their mistakes alone, without older-sister's guidance. To be fair, Michael Nankin's script is the standard coming-of-age tale that doesn't offer many surprises. But throwing the "end-of-the-world" wrench into their already-strained relationship — a cute metaphor for what poor Glen is really feeling — is a neat twist for our little hero to rise above and prove he handle the changes.

Yes, I love 'The Gate' largely for its nostalgia, but let's consider and value the period in which this cult favorite was made. This was also a time when movies targeted at younger viewers didn't shy away from the scary, nightmare-inducing visuals and featured kids in real peril, where we actually felt children were in danger and might not succeed. Even if their ultimate success is rather silly and maudlin, the events leading up to that predictably happy resolution is peppered with life-threatening encounters, the sort of graphic horror we no longer see in kids' movies because something has changed in what we think children can or cannot handle on the big screen. It's the horror stuff no longer considered appropriate or acceptable for younger viewers. In nostalgically enjoying this 1987 horror gem, I also miss movies such as 'Beware! Children at Play,' 'The Black Cauldron,' 'The Watcher in the Woods,' 'The Witches,' 'Gremlins,' and 'The Goonies.' Tibor Takács's film proudly sits among those dark, scary movies for kids.

Lionsgate Home Entertainment brings 'The Gate' to Blu-ray as a Collector's Series under the distributor's Vestron Video line. The Region A locked, BD50 disc is housed inside a blue, eco-cutout case with a glossy slipcover. At startup, the disc goes straight to a static menu screen with a full-motion clips and music playing in the background.

The gates to the underworld are accidentally summoned to Blu-ray with a great-looking 1080p/AVC MPEG-4 encode, which from the looks of it, might have been made from the same remastered version seen a few years ago on DVD. But whatever the case may be, the 1987 horror favorite has never looked better, showing plenty of sharp detailing in the clothes, foliage and the 80s furnishing. The tiny little wrinkles and furrows of the small demonic minions are distinctly visible, whether it's in the stop-motion sequences or actors running around in body suits. Understandably, there are a few moments of softness here and there, but a vibrantly colorful palette keeps things upbeat and animated with primaries looking particularly striking and richly saturated. Contrast and brightness levels are very well-balanced with comfortably bright whites throughout and strong, true blacks. With a visible thin layer of natural grain, the 1.85:1 presentation arrives with a welcomed cinematic quality fans with love.

The dark kingdom of little evil minions pour into home theaters with an outstanding DTS-HD Master Audio stereo soundtrack that surpasses initial expectations. The design is littered with various noises and off-screen effects, generating a convincingly broad and expansive soundstage. Applying the receiver's upmixing function, many of those same atmospherics nicely bleed into the other channels, which keeps things lively and engaging from beginning to end. But even without it, the background is continuously active with the sounds of thunder, moths flying across the screen or the echo of the giant demon's, delivering a satisfying soundfield. The mid-range is dynamic and detailed, even during the loudest sequences, exhibiting superb clarity and fidelity in the upper frequencies. Low bass isn't particularly noteworthy, but it's adequate and surprisingly hearty, providing the track with an excellent sense of presence. With distinct, precise vocals in the center, the lossless mix is an awesome addition to the video.

In all honesty, a large part of the love for Tibor Takács's 'The Gate' is largely due to nostalgia, reminiscing for those days when violent, scary movies were made with younger viewers in mind. And still, the story about two boys reaching that age when they're feeling abandoned and isolated by the grownup world is an amusing coming-of-age tale told through a dark fantasy lens full of life-threatening danger, and it remains just an entertaining as ever. The Blu-ray arrives with an excellent audio and video presentation that will surprise fans, but the addition of brand new supplements touching on various aspects of the production is most tempting. The overall package is recommended and makes a great addition to any enthusiast's cult library.

Sale Price 28.49
List Price 39.97
Buy Now
3rd Party 22.95
In Stock.
See what people are saying about this story or others
See Comments in Forum
Previous Next
Pre-Orders
Tomorrow's latest releases