Academy Award winner Jennifer Lawrence (Best Actress, Silver Linings Playbook, 2012) and Chris Pratt (Guardians of the Galaxy) are among the 5,000 passengers who decided to board the Avalon spaceship for a 120-year journey that offers them the opportunity to wake up in a new century, on a new planet. The trip takes a deadly turn when their hibernation pods mysteriously wake them 90 years before they reach their destination. As they try to unravel the mystery behind the malfunction, they discover that the ship itself is in grave danger. With the lives of 5,000 sleeping passengers at stake, only Jim and Aurora can save them all. 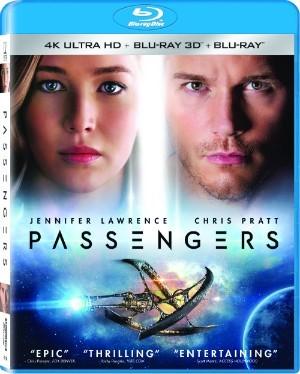 Passengers seemed like a sure-fire blockbuster. Two of the most popular actors in the world right now -- Chris Pratt and Jennifer Lawrence -- in a big-budget sci-fi setting that's a cross between Titanic and The Martian. But poor Sony can't seem to catch a break these days at the box office, and while Passengers wasn't exactly a bomb, it didn't pull in as much as the studio anticipated.

The movie was not well-received in part due to the bashing it received from critics who questioned the actions of the main character early in the film, and whether or not anything he did in the second half could redeem him. It also didn't help that Sony marketed the movie without mention of these actions.

Since the events we're talking about take place in the first 30 or so minutes, they're effectively the film's whole premise, so I don't personally consider them spoilers. But if you'd like to go into Passengers with a blank slate, this is a good point to jump down to the other sections of the review.

Chris Pratt stars as Jim Preston, one of about 5,000 passengers in hibernation tubes aboard the spaceship Avalon, which is making a multi-year journey from Earth to a new world known as Homestead II. But something goes wrong with Jim's tube, stranding him awake and alone with 90 years left on the Avalon's long trip across the stars.

Jim tries to make the best of things with his free time -- exploring the ship, trying to figure out if he can fix his hibernation pod (he can't), and spending a lot of time talking to the ship's robot bartender, Arthur (Michael Sheen). He subsists for a whole year, but the solitude wears on him to the point of considering suicide. During one of his more down moments, Jim comes across the hibernation pod of Aurora Lane and is immediately drawn to her (she's played by Jennifer Lawrence, so who wouldn't be?!). After finding out everything he can about Aurora, Jim considers waking her up. It will solve his loneliness, but it's also condemning her to a life on the ship with him instead of the one on Homestead II that she signed up for.

After much internal debate (as well as bouncing his ideas off of Arthur), Jim finally goes through with it and makes her pod malfunction -- waking Aurora up. Of course, he doesn't tell her the truth, but is at least honest about spending the last year on the Avalon alone. The two spend time together and eventually fall in love with each other... until Aurora discovers the truth about Jim waking her up, causing a major rift between the two. Without giving away too much more of the storyline, a situation eventually develops where the two -- along with one of the ship's officers (played by Laurence Fishburne) whose pod also malfunctions -- realize the Avalon's systems are failing and, if they don't fix things, everyone aboard will die.

So the big debate over the movie -- one of the major reasons many critics and moviegoers hated it -- was due to the fact that the film's "hero", Jim, is kind of creepy... becoming obsessed with Aurora and then making a decision that potentially ruins her life (Aurora equates it to murder in the movie, and she's not far off). I didn't have as huge of a problem with this development as others, and I'll tell you why: the story never takes Jim's actions lightly. In fact, he's haunted by it throughout most of the film. What I did have more of an issue with is the rest of the storyline – which honestly, is pretty light fare (despite the fact that the fate of the ship and all aboard hang in the balance). The plot isn't very complex at all, and I couldn't help wondering while watching it why Sony invested so much money and star power into a movie that might have worked just as well (and arguably better) as just a small-budget film with a couple of unknowns in the lead.

In fact, he's haunted by his choices throughout the film. What I did have more of an issue with is the rest of the storyline, which, honestly, is pretty light fare despite the fact that the fate of the ship and all aboard hang in the balance. The plot isn't very complex, and I couldn't help wondering why Sony invested so much money and star power into a movie that might have worked just as well (and arguably better) as just a small-budget film starring a couple of unknowns.

The bottom line? Passengers isn't as bad as you may have heard, but neither is it nowhere near as good as you might have hoped. It's a middling movie, neither awful or great, and I honestly couldn't make a strong argument against the film's fans any more than I could make one against those who loathe it. It's definitely one of those titles you'll want to rent or catch on a streaming service before making a purchasing decision.

Passengers lands on Blu-ray in a Blu-ray/Digital HD combo pack. The standard keepcase includes an insert containing a code for a digital copy of the movie as well as for Sony Rewards points, with the flip side containing a second code for a discount off Sony movies online. A slipcover matching the artwork of the keepcase slides overtop.

The Blu-ray disc is front-loaded with an ad for Digital HD titles (and how to use the inserted code), plus trailers for Inferno, The Magnificent Seven, Billy Lynn's Long Halftime Walk, the Passengers: Awakening virtual reality game, and Resident Evil: Vendetta. The main menu is a still shot of the top part of the box cover image (head shots of the two stars) with menu selections horizontally across the bottom of the screen. 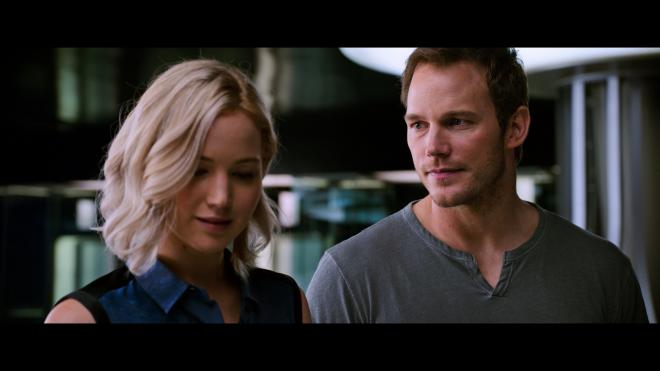 Passengers was shot digitally on the Arri Alexa 65 and is presented in the 2.39:1 aspect ratio.

As far as the Blu-ray transfer is concerned, there's not much to complain about here. The level of depth and detail to the image provides about the best 1080p can offer, skin tones look natural throughout, and black levels are quite strong and inky deep. There are no noticeable issues with noise or banding, but there are a couple instances of aliasing (mostly during panning shots) that will be picked up on by most keen viewers. Overall, though, this is a well-done presentation.

The featured English 5.1 DTS-HD Master Audio track is impressive for what it is, but may be a letdown to some buyers considering the 4K release of this movie features a full-blown Atmos presentation. However, dialogue is crisp and clear, the separation of sounds and the overall mix is well-done, and there's still an effective use of both LFE and the surrounds in this presentation. As 5.1 tracks go, this is a very solid one. I also detected no obvious glitches, dropouts, or other errors in the track.

In addition to the 5.1 lossless track, the Blu-ray also has audio tracks in French 5.1 DTS-HD Master Audio, Spanish 5.1 Dolby Digital, and an English Audio Descriptive Service track, as well as subtitles in English, English SDH, French, and Spanish. 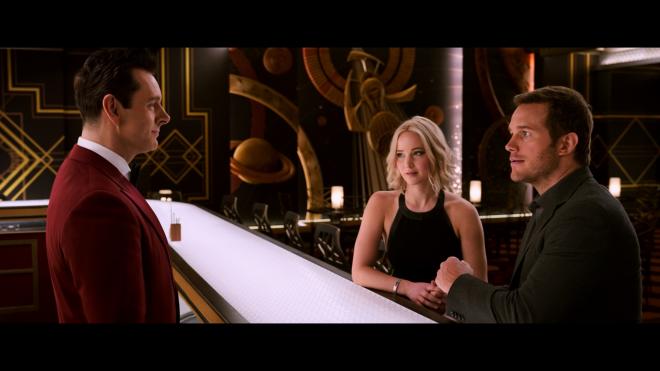 Deleted Scenes (HD 9:49) – A collection of eight deleted scenes from the movie, which can be watched together or individually. They consist of:

Space on Screen: The Visual Effects of Passengers (HD 7:26) – As you may have guessed from the title, this featurette covers all the visual F/X of the movie, with comments from various members of the cast and crew, including Visual Effects Supervisor Erik Nordby.

On the Set with Chris Pratt (HD 4:19) – This short, but fun, little featurette has star Chris Pratt goofing around on the set, intertwined with "talking head" comments from his cast mates telling us how he's a great guy.

Creating the Avalon (HD 9:35) – This segment takes a look at the massive production design of the Alvalon set. There are comments here from members of the cast and crew, including Production Designer Guy Hendrix Dyas.

Outtakes from the Set (HD 4:23) – Most blooper reels aren't worth the time, but this is a nice collection of flubs, errors, and just screwing around on the set that most viewers should enjoy.

Book Passage (HD 4:40) – These are short, faux advertisements for how one can book a journey aboard the Avalon. They can be watched together or individually and consist of: 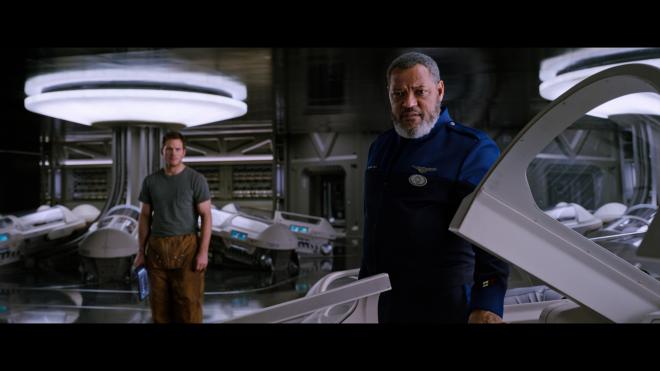 Far from a great movie, Passengers is still a lot better than some of its critics would argue, and worth at least one viewing. While the story does have a number of issues, I'll give the movie credit for not being overcomplicated nor feeling the need to wow audiences with a ton of needless action scenes. It's nothing that will thrill you, but it's still a fairly pleasant watch.

Despite the Blu-ray offering a strong a/v presentation, Give It a Rent before making a purchasing decision.

Sale Price 8.99
List Price 14.99
Buy Now
3rd Party 7
In Stock.
See what people are saying about this story or others
See Comments in Forum
Previous Next
Pre-Orders
Tomorrow's latest releases