The follow-up to Jess Franco's career-launching film The Awful Dr. Orloff, Dr. Orloff's Monster is a modern gothic thriller, injected with moments of perverse eroticism, science fiction, and smoky jazz. When Melissa (Agnés Spaak) returns to her ancestral home to claim her inheritance, she finds that the castle is filled with strange characters and dark secrets. Governing the crumbling manor is a diabolical scientist, Dr. Conrad Jekyll (Marcelo Arroita-Jáuregui), who uses high-frequency mind control to command an undead henchman (Hugo Blanco) to perform a series of vicious murders. When a dry-witted detective (Pastor Serrador) and Melissa's suitor (Pepe Rubio) trace the crimes back to Jekyll's castle, they realize the only way to trap the zombie is to use Melissa as bait.Special Features: French soundtrack with optional English subtitles, English language soundtrack, Audio commentary by film historian Tim Lucas, Eleven minutes of alternate, more sexually explicit footage, French theatrical trailer, Italian theatrical trailer

If we were to rank Jesús Franco's movies in order from best to worst — and this coming strictly from individual tastes and everything being relative — 'Dr. Orloff's Monster' would fall somewhere between the top quarter and the middle. Considering he ranks as one of the most prolific filmmakers in the world, writing and directing approximately 180 productions in his lifetime, which places him along such better-respected names as William Beaudine, Maurice Elvey and Richard Thorpe, that's decently impressive and nothing to really scoff at. Essentially, even at his objectively dullest and prosaic, which this movie definitely is, Franco's movie still manages a slightly above batting average. Then again, anything that would fall in the bottom quarter must pretty godawful in light of those statistics, and there are way too many to name here. But back to 'Orloff's Monster,' which is known as 'The Mistresses of Dr. Jekyll' and 'The Secret of Dr. Orloff' in other parts of the world, where Franco displays some admirable camerawork sadly impaired by a shoddy plot.

Working under the pseudonym Jess Franck, the modestly-budgeted sci-fi horror flick comes from the relatively early part of Franco's career, a time when the Spanish-born filmmaker exhibited some creativity and an interesting visual elegance. It's nothing unusually thought-provoking, masterly or requiring academic study, but the method and technique in his formative years reveals enough sophistication and promise to intrigue viewers like myself. This film, in particular, seems to have taken a great deal of inspiration from classic Universal Studios monster pictures, immersing a picturesque town and the nearby castle where much of the action takes place with a charmingly antiquated yet still modern feel. But funnily, that feeling is largely due to several sequences inside an old-fashioned, wooden tavern nightly attended by townsfolk for the jazz-infused burlesque shows. Working with cinematographer Alfonso Nieva, the production basically looks like how we'd imagine an updated version of 'The Wolf Man' might look, bathed in sinister shadows and fashionable attire. 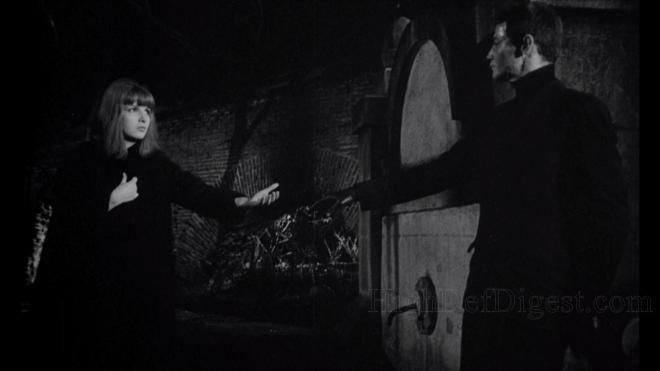 Of course, when taken as a whole, the movie could never compare to the work done by George Waggner and Joseph Valentine in that horror masterpiece, but it has its visually notable and somewhat memorable moments worth pointing out. The story Franco co-wrote with two others follows Dr. Conrad Jekyll (a rather uninteresting Marcelo Arroita-Jáuregui) — no relation to the Robert Louis Stevenson's novella — on the brink of discovering the secret of breathing life into death. Except, his plans are for some absurdly nefarious purposes, motives which are never fully explained, but we're made to imagine the monster Andros (Hugo Blanco) satisfies his twisted desires for murdering young voluptuous women. In one scene, Jekyll is seen talking to the tavern's main attraction beneath a heavily-lit Charlie Chaplin portrait, and the two are absorbed by shadows. It's a curious visual design indicating their affair while his fidgeting insinuates feelings of guilty. Later, when Inspector Klein (Pastor Serrador) questions witnesses in the tavern after the murder, the long-take that follows is a fascinating showcase of careful planning, masterful direction and blocking.

In other parts of the movie, Franco displays more of his skill behind the camera — which he sadly sabotages with outrageously bad dialogue, some foolish composition choices and a cockamamie subplot about young love. The two lovers are Jekyll's niece Melissa (Agnès Spaak) and her new boyfriend Juan Manuel (Pepe Rubio), but their romance is simply used just for creating a damsel-in-distress showdown where her knight in shining armor swoops in to save her. Cue the clichéd walking into the sunset in each other's arms scene with a crane shot of them strolling off-screen. And again, Franco shows a talented mind at work with more beautifully designed and quiet sequences of odd reflection. Namely, several shots of the town's buildings and cobblestone roads at night, ominously glowing as the monster with a terrible a skin condition — Seriously! Someone give a case of Lubriderm! — haunts the neighborhoods. Melissa calmly approaching him from the darkness is even more captivating. If working from a tighter, better though out plot, 'Dr. Orloff's Monster' would have made for a more irresistibly compelling highlight in Jesús Franco's filmography.

Jekyll's mistresses meet their fate on Blu-ray with a strong yet average 1080p/AVC MPEG-4 encode. It's another "as-is" transfer of the best available elements from Kino Redemption, which is standard practice for low-budget Euro-sleaze of this caliber. Nevertheless, the presentation shows with good definition and resolution overall with plenty of sharp detailing in many scenes. Close-ups are occasionally revealing, and background information is plainly visible even in the darkest, poorly-lit moments. The 1.66:1 image is awash with a thin grain structure, providing the frame with an attractive film-like quality, and the video displays excellent contrast and brightness balance. However, the source hasn't aged well, showing a good deal of softness and blurriness throughout. White specks, dirt and vertical scratches make numerous appearances, and there are also a few instances of discoloration, mild gate weave and a fair amount of blooming.

Like the video, the uncompressed PCM mono soundtrack is faithful to the condition of the source with some appreciable moments along with many less satisfying ones. The terrible ADR work is forgivable though hilariously distracting at times, but the voices also display a great deal of hissing and noise in the higher pitches, which honestly, is the presentation's worst and most off-putting aspect. There are several times when the high-rez track comes off very bright and piercing, most noticeably when Jekyll summons his monster to kill. All things considered, the lossless mix is not altogether bad, but it's not wholly impressive either. There's decent clarity and detail to be appreciated in some spots, but on the whole, it doesn't offer much range and variation. Coupled with the lack of a low-end, the lossless mix, in general, is flat and listless.

Although Jesús Franco displays some admirable camerawork, creativity and an interesting visual elegance, 'Dr. Orloff's Monster' is ultimately hampered by a shoddy, nonsensical plot, outrageously bad dialogue, some foolish composition choices and a cockamamie subplot about young love. The Blu-ray arrives with a strong but still average audio and video presentation. With a lackluster set of supplements, the overall package is of little interest outside of fans and cult enthusiasts.

Sale Price 17.49
List Price 29.95
Buy Now
3rd Party 12.49
In Stock.
See what people are saying about this story or others
See Comments in Forum
Previous Next
Pre-Orders
Tomorrow's latest releases