October, 2008. Young nun Colleen (Addison Timlin) is avoiding all contact from her family, until an email from her mother (Ally Sheedy) announces, Your brother is home. On returning to her childhood home in Asheville, NC, she nds her old room exactly how she left it: painted black and covered in goth/metal posters. Her parents are happy enough to see her, but unease and awkwardness abounds. Her brother is living as a recluse in the guesthouse since returning home from the Iraq war. During Colleen s visit, tensions rise and fall with a little help from Halloween, pot cupcakes, and GWAR. Little Sister is a sad comedy about family a schmaltz-free, pathos-drenched, feel-good movie for the little goth girl inside us all.

In 'Little Sister,' a terrifically amusing dark comedy gem that went largely ignored by mainstream audiences last year, Colleen (Addison Timlin) is starting to show doubts about her calling to a life of poverty and chastity. With her final vows fast approaching, she still sneaks out at night to see local shows at some questionable nightclubs in Brooklyn. By day, she continues her promise of serving the less fortunate and participating in various church activities, hiding her tired, drowsy eyes behind a pair of green, child sunglasses. And those glasses also help hide her uncertainty, however small it is, and Timlin is terrific in the role of a young woman internally questioning the choices she's made. She never literally voices those concerns, but her dolefully expressive eyes betray her, giving away the secrets of the mousy introvert. Not only can we plainly see this, but the Reverend Mother (an underused but still excellent Barbara Crampton) also notices. She grants Colleen a week to visit with family and reevaluate her calling.

From writer-director Zach Clark, the indie dramedy is not a tale about change, about our protagonist discovering she belongs on a different path or that she will come out with a different outlook on life. Those expectations are reasonable given Clark's previous two efforts — 'White Reindeer' and 'Modern Love is Automatic' — have been equally effective character studies of women reexamining their life choices. This is a story about reaffirming those decisions, feeling more secure and reassured moving forward. It's not about learning what could possibly be a mistake as much as confidently knowing that the first choice was the right one all along. And there is also another underscoring theme adding to the plot's enjoyment. As we meet the family and spend just enough time with each, we learn their quirky but emotionally-damaging troubles and how they each affect Colleen. Or better yet, we gain a better understanding of the helpful, caring woman she grew into, one with a passion and talent for helping those in need of her. 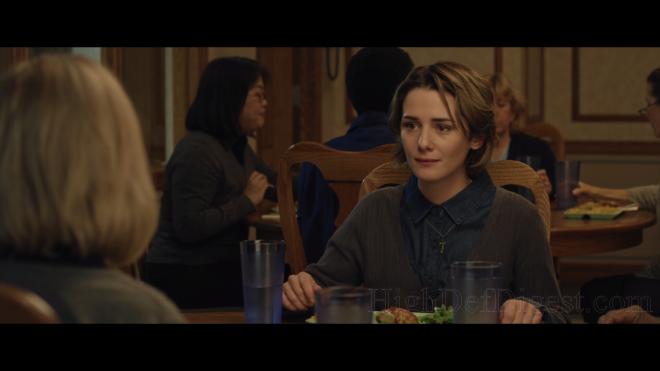 For Colleen, doubts of a life in the service of the church slowly erode as her mother Joani (an excellent Ally Sheedy) starts to criticize her only daughter or suddenly switch on a dime to angry mode, treating Colleen as if she were fifteen again rather than an adult. In the three years she was gone, Joani's dependency on addictive substances has expanded while dad (Peter Hedges) adopts an "ignorance is bliss" approach. When reuniting with a high school friend (Molly Plunk), Colleen is reminded that even as a teenager, she never partook in alcohol and drugs like the other kids. Neither of the two women seem to put two and two together, but we do. Meanwhile, her brother Jacob (Keith Poulson) is back from the military after being injured from a bombing that has scarred a majority of his body and all his face. Only Colleen is able to bring her brother back from his seclusion and rejoin the world. These are the people — good, bad, neutral — that have unwittingly shaped and molded Colleen into the caring person she is.

I'm not presuming this was Clark's deliberate intention when writing this tale about a much too familiar dysfunctional family, but it's what makes 'Little Sister' a touchingly fascinating film that kept me engrossed from the opening moments until the tender, bittersweet finish. And that finish is not necessarily filled with the sort of sadness as the word would imply, but as the story organically unfolds with Colleen recognizing her family's contribution to personality and outlook on life, the ending is both sweet and bitter because it's relatable. Whether we like it or not, the maladjusted, emotionally flawed and understandably wounded people in our lives have an influence on us and affect our perception of the world. Joani sowed Colleen with patience and tolerance for difficult personalities. Jacob instilled in his little sister the gift for compassion and a talent for reaching even the most willfully stubborn. 'Little Sister' is a heartwarming, tragically comical arthouse piece on life's little calamities which shape our adult selves.

Kino Lorber brings 'Little Sister' to Blu-ray on a Region A locked, BD50 disc inside the standard, blue keepcase. At startup, the disc goes directly to a static screen with the usual menu options.

The gothic nun returns home with an excellent and beautifully stylized 1080p/AVC MPEG-4 encode. Much of the photography is a bit on the restrained side, providing the story with a grave and sober tone, but contrast remains well-balanced throughout with clean, crisp whites in every scene. Brightness levels are affected somewhat by the filmmaker's creative choices, making shadows in poorly-lit interiors a tad murky and faded. Nevertheless, blacks overall are rich and true with strong shadow delineation, allowing viewers to see every item decorating Colleen's drearily dark bedroom. The palette, too, feels deliberately subdued, but primaries still come through with lots of vividness while secondary hues remain richly saturated, giving the colored hairdos a bright intensity and providing the Colleen's family home with warmth.

Presented in a 2.39:1 aspect ratio (OAR is 2.35:1), the film was originally shot on the Red Epic Dragon system. But thanks to the fantastic cinematography of Daryl Pittman, the digital-to-digital transfer doesn't come with that largely unattractive digital appearance. The video displays outstanding definition and clarity of the smallest decoration and random items throughout the house. The fabric of the clothing reveals every thread and stitch, the fine lines of leaves in the foliage are distinct, and viewers can really appreciate the realistic makeup work in Jacob's burned face. Facial complexions are highly revealing with lifelike textures in close-ups. There are a couple minor instances of mild banding in a couple scenes, but altogether, this is an excellent presentation for a surprisingly good film.

Right from the beginning, the front soundstage opens with a wide and expansive feel, as Fritz Myers's score spreads into all three channels evenly and lightly bleeds into the sides. The same goes for Jacob's passionately rowdy drumming, filling the room in a surprisingly convincing manner that'll leave the listener sympathizing with other characters. The rears are employed on various occasions with sounds of traffic, the commotion of other family members in another room or birds chirping from a nearby forest. The effects are discrete with excellent directionality and panning, delivering a wonderfully satisfying soundfield. For the most part, dynamic range exhibits rich clarity detail and fidelity, but there are a couple mild instances of distortion in the upper frequencies, largely caused by Jacob's drumming. Nevertheless, a nicely responsive and heavy low-end provides the lossless mix with a great deal of presence and appreciable weight. With distinct, precise vocals in the center, this is an outstanding high-rez track for a drama.

From writer-director Zach Clark, 'Little Sister' is a subtle tale about rediscovering the small pains and tragedies of life are precisely what shape and fashion us into the adults we become. With all around excellent performances by the cast, the indie dramedy is a heartwarming, tragically comical arthouse piece deserving a great deal more attention by cinephiles. The Blu-ray arrives with a surprisingly excellent audio and video presentation, but with a small collection of supplements, the overall package makes an excellent rental for the curious.

Sale Price 29.99
List Price 34.95
Buy Now
3rd Party 22.61
In Stock.
See what people are saying about this story or others
See Comments in Forum
Previous Next
Pre-Orders
Tomorrow's latest releases