Oscar winners Brad Pitt and Marion Cotillard star as Max Vatan and Marianne Beauséjour, two of the world's deadliest spies, who fall in love while undercover on a top-secret mission and marry during World War II. But when Max learns his wife may be secretly conspiring with the enemy, he has only 72 hours to prove her innocence and save his family before he must do the unthinkable.

'Allied,' the latest drama from Robert Zemeckis, is as much about the sticky, complicated entanglements in the field of espionage as it is about the messy, sometimes problematic knots within even the most fairytale-like marriages. It may seem like much forethought for a Zemeckis production, whose more straightforward and proficient style hasn't always garnered him the same level of attention and admiration as his peers, but he's a skilled and effective craftsman who knows how to compose and design an entertaining picture while slipping a bit of wit and smarts concealed beneath the showmanship. And this espionage romance written by Steven Knight ('Dirty Pretty Things,' 'Eastern Promises') falls in line with his more recent films: perfectly fine and satisfactory but nothing particularly noteworthy. However, he and talented cinematographer Don Burgess permeate the troubled affair of a married spy couple with a glamorous, elegant charm that recalls classic Hollywood, a sort of star-crossed lovers story bathed in golden yellows and sinister shadows.

Set in Great Britain at the height of WWII, the film's title simultaneously alludes to superpowers uniting against German forces as well as the collaboration between spies from different nations. On the surface, Zemeckis and company deliver a fairly standard spy thriller, opening with intelligence officer Max Vatan (Brad Pritt) landing in French Morocco. A little later, a well-dressed, clean-cut Vatan, now under the guise of a French businessman on holiday, enters a nightclub in Casablanca to meet the mysteriously glamorous French resistance fighter Marianne Beausejour (Marion Cotillard). The first few minutes make for a fascinating watch as two complete strangers are instantly thrown into this façade of an enamored couple, unhesitatingly impersonating the perfect loving pair in the eyes of the enemy. Right from the start, their union is built on assumptions about each other while still knowingly accepting the charade for what it truly is. Their time together planning the assassination of a German ambassador is fraught with danger and a suffocating air of distrust. 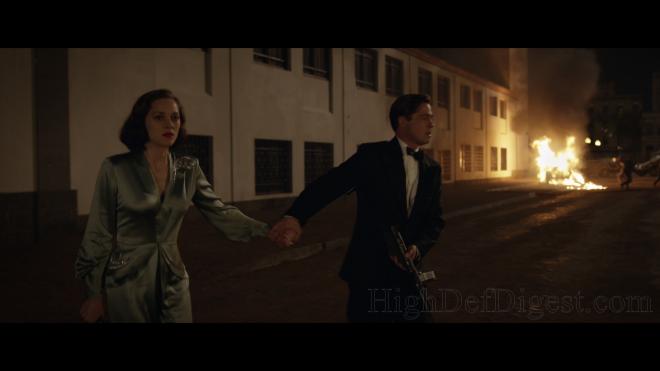 And Zemeckis skillfully creates a heated climate of suspense and mistrust permeating their relationship from the onset, which again to the filmmakers' credit, never really subsides and follows the doomed couple. Written in the past tense form, the word allied carries a third meaning, one pertaining to the plot's more shrewdly-devised themes. It also refers to a marriage union, and the two collaborators do fall in love, eventually marry and have a child in the middle of a massive Blitzkrieg. With their match already rooted on unstable, shady grounds, that last tidbit of foreshadowing, where Marianne yells to Max what, at first, seems like a romantic confession until we learn otherwise, only cements the inevitable tragedy. Over a year later, the doubt and suspicions from earlier come back to haunt and torment the couple when Max is informed his affectionately devoted wife might be a spy. Forced to choose between winning the war and his faith on the woman he loves, the possibility is enough of a seed to breed uncertainty, questioning her every move and the people she talks to.

In 'Allied,' Zemeckis isn't so much concerned with piecing the mystery together and affirming our suspicions as much as about sympathizing with Max's turmoil of being deceived. This spy game doesn't require a whole lot of guesswork — and even when guessing correctly, the final moments still come as a bit of a heartbreaking surprise — because the emphasis is more on the characters and how they handle their unique situation, making this more about the performances, which Pitt and Cotillard do admirably well. 'Allied' is a romance drama about a marriage seeped in deception and playing traditional roles disguised as a typical espionage thriller. The real joy, at least for this viewer, is in seeing how the filmmakers crafted and manufactured the pretense into feeling real, the art of the artifice. And we're not talking about something Zemeckis and his team do especially well or noteworthy, but it's nonetheless entertaining, with a satisfying conclusion.

Paramount Home Entertainment brings 'Allied' to Blu-ray on a Region Free, BD50 disc housed inside a blue eco-vortex case with a flyer for an UltraViolet Digital Copy. At startup, viewers are taken straight to a static menu screen with music and options along the bottom.

The spy who loved too much takes aim at Blu-ray with a drop-dead gorgeous 1080p/AVC MPEG-4 encode that recalls classic Hollywood in nearly every frame. Shot entirely on the Red Weapon Dragon camera system, the presentation doesn't come with that unattractive digitally sterile appearance, which is largely thanks to the beautifully designed photography of Don Burgess.

There are a few times where contrast deliberately runs hot to reflect the hot desert climate, but overall, the picture is terrifically balanced and comfortably bright with crisp, immaculate whites throughout. This is matched by inky rich, luxurious blacks and deep, penetrating shadows without ever ruining the finer details in the darkest portions of the frame, providing the image with a stunning cinematic appeal. Although much of the palette is intentionally restrained and determined by the location and mood of the characters, colors are cleanly rendered while allowing primaries to shine with vividness and brilliance.

Presented in a 2.40:1 aspect ratio, the freshly-minted transfer also lands with razor-sharp details in every scene, exposing every stitch, thread and fabric in the costuming. The pockmarks in the stone and brick architecture of buildings can practically be counted while individual hairs, blades of grades and leaves on trees are crystal clear and distinct. The smallest piece of furnishing and ornament in the Vatan household is plainly visible from a distance, the lettering of signs and bottles are legible, and lifelike facial complexions reveal the pores, wrinkles and the tiniest negligible blemish, making this reference quality.

On the audio frontlines, the espionage drama is outfitted with a front-heavy but nonetheless excellent DTS-HD Master Audio soundtrack, leaving us to wonder what an object-based option might have accomplished, especially during the many action-packed sequences.

Still, this is not to disregard what listeners are met with here. The design delivers a terrifically engaging and broad soundstage with superb channel separation and balance. For a solid majority of the time, the background is continuously active and crowded with a variety of noises, from the chatter and commotion of people at a party to sudden bursts of gunfire. The effects flawlessly travel across all three channels with discreteness and convincing effectiveness. Occasionally, many of those atmospherics bleed into the sides, which nicely expands the soundfield and can at times feel decently immersive. However, everything is maintained within the fronts, perhaps for recreating that classic Hollywood feel, exhibiting a distinct, detailed mid-range with exceptional room-penetrating clarity during the loudest segments. A robust and periodically wall-rattling low-end provides a palpable feel and presence to the action and the music. With a clear, precise dialogue in the center, the lossless mix is a splendid complement to the video.

From Robert Zemeckis, 'Allied' is essentially a romance drama about a marriage seeped in deception disguised as a typical espionage thriller. With great performances and told in classic Hollywood style, the film is entertaining with a satisfying conclusion. The Blu-ray arrives with a gorgeous, reference-quality transfer and an excellent audio presentation. Though supplemental material is light, the overall package is recommended for fans and the curious.

Sale Price 12.99
Buy Now
3rd Party 11.99
In Stock.
See what people are saying about this story or others
See Comments in Forum
Previous Next
Pre-Orders
Tomorrow's latest releases