Love with the Proper Stranger

Taken for granted by her Italian family, New Yorker Angie Rossini seeks solace in the arms of irresponsible jazz musician Rocky Papasano. She becomes pregnant, but doesn't expect Papasano to marry her; all she wants is enough money to pay for an illegal abortion (this is ten years before Roe v. Wade). Not surprisingly, Papasano is refused a loan by his girl friend Barbie; meanwhile, Rossini is being pressured by her family to marry gormless Anthony Columbo. As the abortion appointment approaches, Papasano begins to feel guilty, but still won't propose. Columbo finds out that Rossini is pregnant, and is willing to make an honest woman of her. Rossini finally makes up her mind what she's going to do and whom she's going to choose when she walks into the seedy abortion clinic. NEW HD Master.

Plenty of romantic comedies deal with the awkward complications resulting from a one-night stand, but how many instantly toss in such not-so-cheery issues as an unwanted pregnancy and (gasp!) the prospect of abortion? Love with the Proper Stranger does just that, and the fact it did so way back in 1963 - a decade before Roe vs. Wade and while Hollywood’s stringent production code still wielded some influence - makes director Robert Mulligan’s charming, deeply human film all the more impressive. Juggling drama with comedy is always a delicate high-wire act, but Love with the Proper Stranger succeeds because it puts its characters before the events that engulf them, which enables the audience to better relate to their predicaments and weather the twists and turns of their wild rollercoaster ride.

That ride begins at a frenetic musician’s booking session in New York City, where plucky, not-to-be-ignored Angie Rossini (Natalie Wood) confronts aimless, average-joe horn player Rocky Papasano (Steve McQueen) about the casual sex they shared a few weeks earlier. Rocky doesn’t even remember Angie, but when she bluntly announces she’s pregnant, she grabs his attention. Stuck in a dreary job at Macy’s and suffocated by her matchmaking Italian mother and over-protective brothers, Angie yearns to escape her sheltered, dead-end existence, and she’s not about to let a baby spawned from a deadbeat musician derail her plans.

Angie asks Rocky to help her find a “doctor” to perform the abortion (which was a dicey proposition back in the days when the procedure was illegal), and though he may be an irresponsible, fly-by-the-seat-of-his-pants schlemiel, Rocky is also honorable and sympathetic, and agrees to see Angie through her ordeal. Time is of the essence, and when the abortionist’s middle man charges an unexpected fee for his services, Rocky and Angie must race around New York in a desperate quest to raise the extra funds. Yet during their mad dash, as they bolster each other’s courage, manage their uncertainties about the impending procedure, and reveal personal details, these two strangers come to know each other far more intimately than they ever did in the sack.

Modestly shot in black-and-white and making terrific use of urban Big Apple locations - both of which add immeasurable authenticity to this simple tale - Love with the Proper Stranger seamlessly mixes comedy and drama, but neither element ever feels forced. The deft screenplay by Arnold Schulman emphasizes human quirks and foibles, celebrates ethnicity, and stresses the importance of a supportive family, no matter how annoying and eccentric it may be. Mulligan, one of Hollywood’s most underrated directors, takes a low-key approach (just like he did with his previous film, To Kill a Mockingbird), never allowing technique or superfluous trimmings to get in the way of his characters, and the result is one of the best offbeat love stories of its generation.

Wood and McQueen are perfectly cast and both vigorously embrace their respective roles. Wood, who dons a natural, no-glamour look (but remains radiantly beautiful) combines wide-eyed innocence with steely-eyed resolve to craft a dimensional and deeply affecting portrayal. After splashy parts in big-budget musicals like West Side Story and Gypsy, Wood goes small here, and her performance reflects a growing maturity and assuredness that would result in a well-deserved Best Actress Oscar nomination. (She would lose the award to Patricia Neal in Hud.)

Weary of being typecast as a macho action hero, McQueen relished the change-of-pace opportunity afforded him here. (He reportedly beat out Paul Newman for the role.) Many of his facial expressions are priceless, and with seeming ease, McQueen nails playing an immature yet lovable lug who’s initially ignorant of feelings and overwhelmed by his situation, yet over the course of the film he learns valuable life lessons and grows up, too. The excellent supporting cast includes the always effervescent Edie Adams, who brightens a few scenes as Rocky’s girlfriend du jour, and a young Tom Bosley, best known as the portly papa on the TV sitcom Happy Days, who makes his film debut as a clumsy gentleman caller who’s tapped by Angie’s mother as the perfect match.

Love with the Proper Stranger may resort to romantic comedy conventions during its last act, but it remains a fresh, slightly quirky, and completely captivating film that helped put a more modern, realistic face on movie relationships. Though its seeming advocation of one-night stands as a method of finding true love should be taken with a grain of salt, this ahead-of-its-time tale of empathy, concession, and humanity deftly balances amusing situations and smart dialogue with heartwarming moments. It may be 54 years old, but it plays as well today as it surely did in 1963, and is still a great date-night flick. 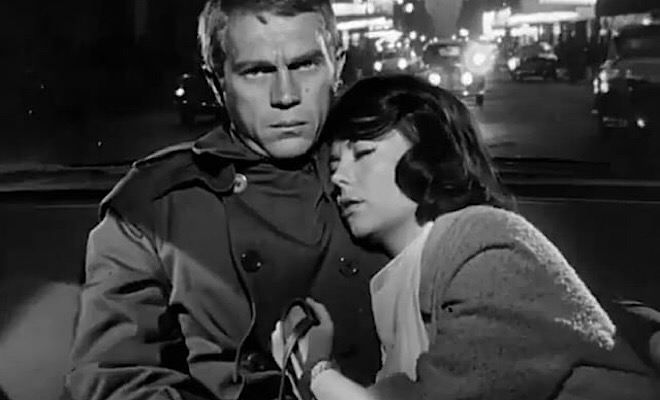 Love with the Proper Stranger arrives on Blu-ray packaged in a standard case with reversible cover art. Video codec is 1080p/AVC MPEG-4 and audio is DTS-HD Master Audio 1.0. Once the disc is inserted into the player, the static menu without music immediately pops up; no previews or promos precede it.

The packaging states the film is "newly re-mastered in HD," and while the image remains crisp yet beautifully textured throughout, a restoration is necessary to impress discriminating classic movie fans and elevate this 1080p/AVC MPEG-4 transfer to the plane where it belongs. Print damage is the main culprit, as innumerable marks, blotches, a pesky thread that hugs the lower left corner of the screen for a few shots, even a couple of reel change markers litter the source material. Other than those nagging annoyances, this transfer looks great and appropriately honors Milton R. Krasner's Oscar-nominated cinematography. Natural contrast enhances the authenticity of exterior scenes, a lovely grain structure provides a palpable film-like feel, and sharp close-ups allow us to fully appreciate the glamour and magnetism of the two leads. Blacks are rich and deep (Wood's dress in the penultimate scene is especially inky), patterns are stable, and excellent gray scale variance heightens detail levels. No crush intrudes and any digital tinkering escapes notice. It's just a shame the subpar print drags this otherwise solid rendering down a notch or two.

The DTS-HD Master Audio 1.0 track provides clear, evenly balanced sound. Ambient effects are especially vital, with crowd scenes, traffic noise, and the hustle and bustle inside Macy's nicely complementing the action without overwhelming it. Dialogue is well prioritized and easy to comprehend, and Elmer Bernstein's infectious score fills the room with ease. Best of all, no age-related hiss, pops, or crackles disrupt the movie's gentle spell. Though hardly bombastic, this lossless track meets the film's needs and seamlessly blends into its fabric.

All the supplements are HD exclusives (see below).

Beautifully combining romantic comedy with human drama, Love with the Proper Stranger remains a captivating character-driven love story that paints a believable portrait of an awkward relationship while tackling serious, relatable issues with honesty and warmth. Natalie Wood and Steve McQueen file understated, endearing performances, and Robert Mulligan's sensitive direction strikes just the right tone. Though the video transfer could be cleaner and extras are a bit lacking on this Kino Lorber release, Love with the Proper Stranger is such a delightful motion picture, it still comes highly recommended...especially on date night.

Sale Price 14.99
List Price 29.95
Buy Now
3rd Party 12.99
In Stock.
See what people are saying about this story or others
See Comments in Forum
Previous Next
Pre-Orders
Tomorrow's latest releases