'Pinocchio' is the third title in Disney's "Signature Collection." Portions of this review have been previously published in Peter Bracke's 'Pinocchio':70th Anniversary Edition' review. This new release contains new special features which are detailed in the HD Bonus Content section of this review. 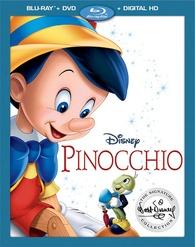 'Pinocchio': The Signature Collection comes with a 50GB Region A Blu-ray disc, a DVD, and a download code. They are contained within a standard blue keepcase, which is housed in a slipcase. Previews available are 'Beauty and the Beast' (2017), 'Moana', 'Descendants 2', 'Elena of Avalor', 'Born in China', and an anti-smoking PSA. 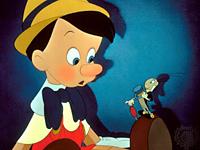 This is the same video presentation as the 70th Anniversary Edition.

This first-ever high-def presentation of 'Pinocchio' easily blows away any past video version. This is another restoration on par with absolute Disney triumphs such as 'Snow White' -- 'Pinocchio' looks fantastic by any measure for a 70 year-old film. It continues to amaze me how good Disney can make their animated treasures look.

First, the film's color palette -- there's been some controversy that Disney has altered or tweaked the film's original stylistic intent. Comparing this Blu-ray to the previous DVD (not the 70th anniversary edition), the Blu-ray indeed looks less "vibrant," at least in terms of saturation. But the old DVD was plugged up and noisy -- I vastly preferred this version of 'Pinocchio,' which is smoother, cleaner and far more textured. Though there remains some film grain -- thankfully -- there is none of the noise, and colors are far more pleasing and rich. (Disney has made no official comment on any of these online complaints, but I'm certainly happy with the results and will say I think they know what they are doing.)

This is the same audio presentation as the 70th Anniversary Edition minus the original mono so half a point was deducted.

Disney offers a remixed DTS-HD Lossless Master Audio 7.1 Surround track (48kHz/-24-bit). For once, I enjoyed the remix, as it expanded the sonic scope of the film without resorting to an overly processed or artificial feel.

The surrounds are fairly active. I was impressed that effects felt discrete, with a full-bodied dynamic range rare for a remix of this vintage. The rear channels are not always sustained, and minor ambiance is present but strongest with typical score bleed -- but it's still a strong effort. The source has been nicely cleaned-up, too, with no audio dropouts or other anomalies.

I did find the mix still on the brash and bright side -- it's likely thankful that Disney didn't go overboard and whitewash the sound and remove any uniqueness, but this remix still can't quite overcome the limitations of the film's era. But no matter -- 'Pinocchio' sounds very, very good.

The extras from previous 'Pinocchio' home-video releases include:

'Pinocchio' is one of Disney's animated classics, and tells a timeless tale that will be familiar to just about everyone on the planet. It remains a wistful and poignant film, and if not as flashy as some of Disney's other epics, may be more emotionally direct. This Blu-ray is terrific. The video and audio restoration is topflight, and the extras bountiful.

The new extras aren't enough for a double dip, but if it''s not yet in your Blu-ray collection, it's a must-own.

Sale Price 21.99
Buy Now
3rd Party 59.99
In Stock.
See what people are saying about this story or others
See Comments in Forum
Previous Next
Pre-Orders
Tomorrow's latest releases