No Highway in the Sky

Jimmy Stewart stars as an aeronautical engineer who predicts that a new type of airplane will fail catastrophically after a certain amount of time in the air, and then finds himself on board one of the doomed planes while headed to a crash site. Cinematography by Georges Périnal (The Fallen Idol, The Life and Death of Colonel Blimp).

Before 'Airport,' 'The High and the Mighty,' and 'Zero Hour!,' there was 'No Highway in the Sky,' an airline-in-jeopardy film that promises more than it delivers. Director Henry Koster's adaptation of the novel by Nevil Shute ('On the Beach') vacillates between comedy, drama, and suspense as it chronicles the passionate attempts of an eccentric scientist to convince the British aviation industry to ground what he believes to be a dangerously compromised fleet of aircraft. Though the movie's poster art advertises action, mayhem, and tension galore, in actuality this is a civilized, often cerebral film that seems more concerned with presenting a stiff upper lip than letting its hair down.

Which is not surprising given the movie's British roots. Produced in England by 20th Century-Fox, 'No Highway in the Sky,' apart from Hollywood stars James Stewart and Marlene Dietrich, features an all-British cast and flaunts a distinct British flavor. Its subject matter, however, crosses international boundaries. Even back in 1951, airline safety was a topic of enormous concern, and - guided by the sharp intellect of its main character - Koster's film addresses the issue with acuity and appropriate urgency.

Theodore Honey (Stewart) is the quintessential absent-minded professor. A brilliant yet hopelessly befuddled engineer, he can research complex scientific problems, but often can't remember his own address. His latest project at the Royal Aircraft Establishment involves testing metal fatigue on its Reindeer airplane line, a task that becomes more critical after a recent mysterious crash. According to Theodore's calculations, once a Reindeer plane flies more than 1,400 total hours, its tail, weakened by constant in-flight vibrations, becomes susceptible to catastrophic damage and can spontaneously break apart. Theodore alerts his superiors at the factory to this potential risk, and they quickly dispatch him to investigate the crash site in Canada.

Theodore dutifully boards a commercial transatlantic flight, but shortly after takeoff learns he's on one of the afflicted Reindeer planes. Panic-stricken, he warns the pilot and flight crew they may be facing impending disaster, but they dismiss his dire predictions until it's too late to turn back. As the plane continues its long trip across the ocean, tensions mount, as Theodore, a Hollywood actress (Dietrich) whom he befriends, and a sympathetic stewardess (Glynis Johns) anxiously await the plane's seemingly imminent destruction.

'No Highway in the Sky' reunited Stewart and Dietrich a dozen years after their legendary pairing in the classic western 'Destry Rides Again,' and even though Dietrich plays what is really a supporting role here, their chemistry remains intact. With a winning sincerity, Stewart combines elements of both George Bailey in 'It's a Wonderful Life' and Elwood P. Dowd in 'Harvey' to craft another wholly believable performance that would prelude his work in two other famous aviation movies of the 1950s, 'Strategic Air Command' and 'The Spirit of St. Louis,' in which he would memorably portray flight pioneer Charles Lindbergh.

Dietrich, whose career had started to wane, reportedly hated the 'No Highway' script and only did the film for the money. Her role is appropriately glamorous, but rather dull, and yet the ever professional Dietrich - who still looks ravishing at age 49 - makes the most of it, filing a sensitive and affecting portrayal. Johns, in her last British film before embarking for Hollywood, also makes a solid impression, and Jack Hawkins is quite good too as an airline industry executive.

The biggest problem with 'No Highway in the Sky' is its seeming reticence to go full throttle. The well-drawn characters hold our interest, but the narrative progresses in fits and starts, and the tension never ramps up like we hope it will. The film also has multiple identities. At one moment, it's an airline disaster film. At another, it's a curious love triangle. And then, at the 11th hour, it morphs into a man-against-the-establishment tale. That's one movie too much for me. Koster, to his credit, does his best to honor all the story's angles and deftly integrates the comic and dramatic accents, but there's a reason why this film remains a second-tier entry on the Stewart and Dietrich résumés. 'No Highway in the Sky' is well made and well acted, but it remains emotionally flat and its intermittent sparks rarely ignite the screen. Maybe that didn't bother British audiences of the period, but it irks this Yankee a bit today. 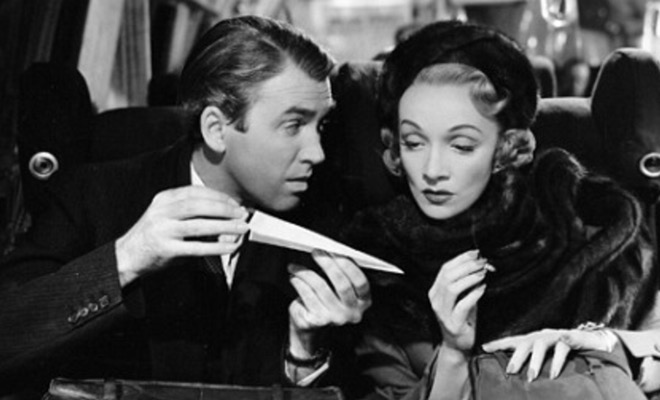 'No Highway in the Sky' arrives on Blu-ray packaged in a standard case. Video codec is 1080p/AVC MPEG-4 and audio is DTS-HD Master Audio 2.0 mono. Once the disc is inserted into the player, the static menu with music immiedately pops up; no previews or promos precede it.

Some slight raggedness afflicts this 1080p/AVC MPEG-4 transfer, but most of the time excellent contrast and clarity distinguish the image. A few errant marks (most noticeable during the opening titles and early scenes) and vertical scratches dot the print, but deep black levels, crisp whites, and nicely varied grays lend the picture a lovely depth and presence. Though grain is faint, there's enough texture to preserve the feel of celluloid, and the close-ups of Dietrich, while a bit on the soft side, are appropriately lush and glamorous. Background elements are easy to discern, shadow detail is quite good, and no digital doctoring could be detected. 'No Highway in the Sky' may not top the list of favorite Stewart and Dietrich films, but fans should be quite pleased with this above-average rendering.

The DTS-HD Master Audio 2.0 mono track delivers clear, well-modulated sound and is free of any age-related hiss, pops, and crackles. In the early part of the film, some of the roaring airplane engines occasionally obscure bits of dialogue, but on the whole, all conversations are easy to comprehend, despite the varying thickness of the British accents. There's not much music in the film - the hum of engines and propellers supply the "soundtrack" - but a wide dynamic scale handles all the bombast without a hint of distortion. This is a workmanlike track that impresses in fits and starts, and is solid overall.

Though it successfully juggles comedy, drama, and suspense, 'No Highway in the Sky' never quite takes off like we hope it will. Director Henry Koster's airplane-in-jeopardy film spends too much time on the ground, but winning performances from James Stewart, Marlene Dietrich, Glynis Johns, and Jack Hawkins help buoy this slow-moving yarn that often craves a jolt of jet propulsion. Solid video and audio transfers and an absorbing commentary track distinguish Kino Lorber's Blu-ray presentation of this well-made but strangely subdued movie. It may not be a keeper, but it's definitely worth a look, especially for fans of Stewart and Dietrich.

Sale Price 17.55
List Price 29.95
Buy Now
3rd Party 12.08
In Stock.
See what people are saying about this story or others
See Comments in Forum
Previous Next
Pre-Orders
Tomorrow's latest releases