Was I the only one who laughed their ass off at the trailer for 'A Knight's Tale?' Seriously, that tagline -- "He Will Rock You?" And the concept -- an Arthurian legend redone as a postmodern pastiche slash MTV music video? Starring a pre-'Brokeback Mountain' Heath Ledger, who looks like he couldn't even knock Pee-Wee Herman off of a horse with a twenty-foot lance? Really, I thought it had to be a joke. How could a movie like this get greenlit? And who in their right mind would plunk down $8 bucks to watch this thing?

And now here I sit, five years later, finally forced to watch 'A Knight's Tale' on Blu-ray. And I gotta admit, against all of my better judgments, I actually liked this movie. Supremely enjoyed it, in fact. Yeah, it's a ludicrous concept. Yeah, it's a bastardization of historical fact. Yeah, the notion of mixing medieval adventure and classic rock tunes is the silliest idea since that "Cop Rock" TV show tanked back in the late '80s. Yet, somehow, writer-producer-director Brian ('Payback,' 'L.A. Confidential,' 'Mystic River') Helgeland does more than pull it off -- he creates one of the smartest, cleverest postmodern "reimaginings" in recent memory.

Okay, the "plot." Ledger stars as William Thatcher, a peasant squire who breaks all the rules of medieval propriety when he passes himself off as a nobleman and takes the jousting world by storm. The only thing standing between William and his dream of becoming the World Champion is bad boy Count Adhemar (Rufus Sewell). When the two rivals go lance to lance at the world finals to determine who will be named the ultimate champion -- and win the love of the beautiful Lady Jocelyn (Shannyn Sossamon) -- you'd better "arm yourself and hold on tight for the thrill ride of your life!" (Back of the box exclamation point! courtesy Sony Pictures Home Entertainment.)

All right, I know -- this sounds dreadful. Absolutely insufferable. But 'A Knight's Tale' is really, truly a great deal of fun. I think it is because Helgeland is never smug or precious about the material. He knows that he is not making a historical epic, merely a modern teen soap opera dressed up in medieval clothing and bombastic rock music. He deftly mixes old-school movie cliches and conventions with arch, ironic cheekiness, and somehow it comes off as charming instead of oft-putting. Really, how can you not smile ear-to-ear at any movie whose opening features a bunch of extras in Abercrombie & Fitch-clean costumes pumping their fists in the air to Queen's "We Will Rock You," and one female peasant even starts getting jiggy with it by doing the "Baby Got Back" butt dance? Sorry, you gotta just surrender to this sort of thing and dive in. 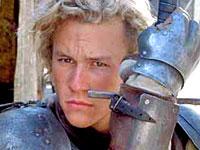 It helps, too, that Helgeland had Ledger onboard. Before he proved to the world that he can, in fact, act, 'A Knight's Tale' was to be his big Hollywood break. And it was. His throwaway smirk and faux-master thespian intensity perfectly sets Helgeland's intended wink-wink tone. Sewell and Sossamon are also in on the joke, realizing their characters are walking cliches yet investing the caricatures with enough wit and humanity so that we actually care what happens to them. I also liked Mark Addy's infectious, mile-wide grin as Ledger's right-hand man Roland, as well as Paul Bettany and the underrated Alan ('Serenity') Tudyk in the ever-dependable, comic-relief sidekick roles.

Of course, none of this is to say that 'A Knight's Tale' is a great film, only great pop filmmaking. And it does have some flaws; namely that, at 132 minutes, it is too long. Yet Helgeland couldn't leave well enough alone and created a 144-minute cut for a special edition DVD released a couple of years back that added even more padding and "character development." However, while this Blu-ray version contains the theatrical version only, I can't imagine anyone wanting this to be any longer. (Certainly, about two dozen POV shots of Ledger ramming his lance into his opponent to the strains of Aerosmith was more than enough for me.) Still, despite overstaying its welcome and its ridiculous concept, 'A Knight's Tale' is never anything less than a total blast.

Sony presents 'A Knight's Tale' in 2.40:1 widescreen and 1080p/MPEG-2 video. Unlike some of the studio's much-maligned earlier Blu-ray releases, this one provides a pretty clear upgrade over the standard DVD release, with improved detail, color reproduction and overall sense of depth, although it is still not perfect.

This transfer does have many plusses. I was quite impressed with how three-dimensional the image could look. Right from the opening scenes, a comparison between the Blu-ray and the old Superbit DVD showed improved detail and definition on the Blu-ray. Fine details that I could not make out on the Superbit, such as the textures of clothes and the ornate, terrific production design, are much more pronounced in high def. Colors are richer, with the lush green countryside a particular standout. The Blu-ray also looks a tad brighter, with slightly improved contrast and sharpness.

Unfortunately, there are still a few problems. The print is not in pristine shape, with some dirt visible throughout and even some white speckles here and there. Granted, it is not excessive, but for a film only a few years old, it is surprising it is not cleaner. (I suspect Sony hasn't gone back to clean this one up for Blu-ray, instead utilizing the same master used for the previous DVD releases.) I also though fleshtones were a bit off -- instead of a vivid orange, most faces veered toward the red end of the scale, at least enough to be distracting. I also noticed some noise and pixelation, despite the fact that there are absolutely no extras on this disc to eat up precious storage space. Overall, this does look better than most of Sony's initial Blu-ray titles, but these nagging problems continue to disappoint.

'A Knight's Tale' will rock you. Really. This film benefits from a terrific soundtrack, one that really cranks at high volume with excellent dynamics and aggressive surround use. Yeah, the sound design can be as silly as the movie, but there is something perversely sublime about listening to the sounds of clanking armor and Queen's "We Will Rock You" at full blast, fist in the air and head banging.

A quick jousting match between the included uncompressed PCM 5.1 and Dolby Digital surround tracks leaves no time for losers. Though the PCM track is encoded at a couple of decibels higher than the Dolby Digital (lower your volume to ensure a fair fight), the uncompressed mix is clearly superior in all respects: dynamic range, bass reproduction, tonal balance, resolution and all that other technical mumbo-jumbo -- the PCM track kicks arse. I don't think the surrounds were ever quiet during the film, even with dialogue scenes. Subtle atmospherics are excellently deployed to all five channels, and the jousting scenes are brash, aggressive and truly immersive -- the sense of envelopment is at times up there with the best modern soundtracks I've heard. And, of course, the rock songs are nicely remixed in 5.1 which only adds to the fun. Like the film itself, listening to this soundtrack left me with nothing a but a silly grin on my face.

Though Sony has begun to add more extras to their more recent Blu-ray releases, that doesn't include 'A Knight's Tale.' There are absolutely no supplements on this disc at all -- not even a trailer. Better hold onto that DVD special edition, then.

I actually liked 'A Knight's Tale,' despite my extreme reservations going into it. It's silly, goofy fun, with a wonderfully lighthearted attitude and a game cast. Now, Sony has produced a straightforward Blu-ray release -- sorry, no extras -- and the soundtrack certainly rocks. Unfortunately, the transfer is a bit spotty in parts, though it does offer a better picture than the standard DVD release. Still, given the premium list price for Sony's Blu-ray titles, this is tough to recommend in terms of overall value for money.