In the 'hood, all that matters are your colors... Bob Hodges (Robert Duvall) is a seasoned street cop who has learned a lot from long experience while his new, young partner, Danny McGavin (Sean Penn), has learned nothing - yet knows it all. Forced to work together in the L.A.P.D.'s renowned C.R.A.S.H. anti-gang unit, they set out to investigate a brutal gang murder. Hated and hunted by both sides, the cops soon find themselves trapped in the middle of a turf war. With nowhere to turn, they are ambushed, double-crossed and shot at in a take-no-prisoners street battle. As the violence escalates, these two diametrically opposed men must come to terms with one important fact - to stay alive they must come together!

Like so many other movies of the late 80s, I can't help but reminisce while watching 'Colors' because I remember the controversy it incited more than the actual movie itself. (That is until watching it again most recently for this review.) There are several images etched into my mind when thinking back at the movie, as well, such as the full-body nude scene during a police raid and Sean Penn's oddly childish reaction to it. But on the whole, the hullabaloo surrounding the cop drama seems permanently attached. The aforementioned scene, for example, generated heated debates of which is more damaging to youth: depictions of gang violence or a woman's fully naked body in a wide theatrical release. For a young teenage lad, like myself, the prospect of seeing that in a major Hollywood production was enough to drive a group of other adolescent boys to the theater. Of course, the fact the movie was about Los Angeles street gangs, a supposed realistic portrayal that led to even more debating, was a factor that also drove our decision because we were from L.A. too.

The point is that much of my current reminiscing included the realization that I was obviously much too young to fully grasp and appreciate Dennis Hopper's intentions. I've seen the film a few times over the years but never with a serious critical eye, and watching it again a couple years shy of its 30th anniversary, I finally took note of the more profound, intricate web Hopper designed. Underscoring a seemingly standard police procedural hides the ideological battle of the best method for tackling the problem of street violence in America, one that sadly cannot be easily resolved in two hours let alone with quick-fix political solutions, like simply putting more cops on the streets. Scene after scene, we're made to watch as if from a short distance the constant back and forth of what should be done. A local town hall meeting with LAPD officers rapidly deteriorates into a yelling match with weary citizens making their helplessness and feelings of injustice known. An ex-gang member turned activist is confronted by the reality of violence being inherent to civilization in another gang member's deceivingly perceptive soliloquy. 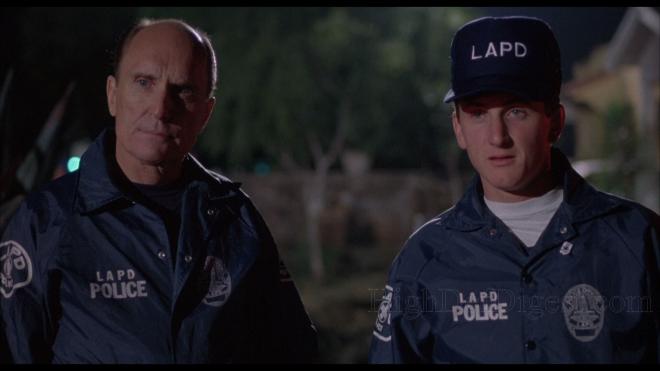 However, much of that is really done in a broader context as though background filler, the endless chatter not often seen or heard because it mostly takes place behind closed doors, the talks rarely sensationalized by the media. Instead, the film narrows the discussion to the more intimate rapport between C.R.A.S.H. unit officers "Uncle Bob" Hodges (Robert Duvall) and Danny McGavin (Penn), two men with drastically different perspectives for combating the streets, points of view that slowly grow into oppositions as the film progresses. As a 20-year veteran on the force working with other departments and even knowing various gang members on a first-name basis, Hodges summarizes his approach through a joke about a young bull and an old bull seeing a herd of heifers. The young, rookie McGavin is the young bull in the joke, much too eager to prove himself in the eyes of others while lacking the patience for self-restraint. His enthusiasm is more a danger and liability that jeopardizes a coherent, planned strategy with a larger end goal, and we see this slowly becoming a problem as McGavin gradually reveals his shortcomings and overconfidence on narrow stereotypes.

In 'Colors,' screenwriters Michael Schiffer ('Lean on Me,' 'Crimson Tide') and Richard Di Lello ('Bad Boys') use the stock buddy cop formula for creating a snapshot glimpse at the pointless bloodshed that's overwhelmed the inner city. Director Dennis Hopper and cinematographer Haskell Wexler portray this pointlessness with a curiously banal, emotionless portrait of Los Angeles, as though it were an ordinary, everyday aspect of one of the world's most (in)famous and recognizable cities on Earth. Although we're given small glimpses into the lives of the characters, whether it is our two main protagonists or the gang members, the camera never feels too emotionally invested or sympathetic to either side of the discussion. There's a certain level of detachment from the reality of violence, yet the conflict and hostility motiving it between different groups of people remain consistently present. McGavin's experience and realization of his failed understanding are demonstrated in his relationship with Louisa (María Conchita Alonso) while also broadcasting what's really at stake in Hopper's film and his more meaningful intentions for depicting gang violence on screen.

Shout! Factory brings 'Colors' to Blu-ray dubbed a "Collector's Edition" under the distributor's "Shout Select" label. The Region A locked, BD50 disc sits inside a blue, eco-elite case with a flyer for other Blu-ray titles. At startup, the disc goes straight to a static menu and options along the bottom.

The cult 80s action drama hits the Blu streets with a pretty faithful and relatively attractive 1080p/AVC MPEG-4 encode. Granted, the source, which appears to have been borrowed from Second Sight for their UK release, reveals its age with a few sequences looking blurry and poorly resolved. However, the condition of those particular areas is related to the extended footage taken from other sources for making this unrated cut of the movie.

As for the rest of the time, the 1.85:1 image displays comfortably-bright contrast with crisp, brilliant whites, providing the presentation with a vibrant, rejuvenated appeal, allowing for excellent visibility of background information. Although the photography tends to be a tad on the softer side of things, fine lines and objects are distinct and often highly detailed, or at least, they are much as would be possible from a movie of this vintage. Facial complexions also reveal pores and negligible blemishes. Black levels could be stronger, but they're nonetheless accurate and true with excellent clarity in the deepest shadows. The 80s palette is impressively vibrant and richly-saturated with vivid neon secondary hues, making the colored clothing of each gang really pop in every scene. With a noticeably consistent layer of natural grain from beginning to end, the video comes with an attractive film-like quality that fans will love.

The DTS-HD MA stereo soundtrack arrives in a similar fashion where both the condition and age of the source are taken into account, except it reveals one glaring defect worth mentioning. For the most part, the mid-range is steady and pretty solid, exhibiting appreciable clarity and distinction in the music and action. However, there are also several instances of clipping and some moments feeling bright, meaning the lossless mix occasionally has issues with cleanly reproducing the loudest action-packed segments. The rest of the design remains evenly balanced with appreciable separation, and background information maintains the soundstage broad and engaging. Low bass is healthy and adequate, providing the film with presence and some oomph in the various song selections. Dialogue reproduction is precise and well-prioritized, making for a good listen.

Like so many other movies of the late 80s, I can't help but reminisce while watching 'Colors,' starring Sean Penn and Robert Duvall, because I remember the controversy it incited more than the actual movie itself. However, after revisiting it again a couple years shy of its 30th anniversary, I finally took note of the more profound, intricate web director Dennis Hopper designed, a snapshot glimpse at the pointless bloodshed that's overwhelmed the inner city and the challenges of bringing it to an end. The Blu-ray arrives with an excellent but noticeably aged video presentation while the lossless audio exhibits a couple minor defects. Nevertheless, with a light but entertaining set of supplements, the overall package is recommended for fans and should look nice in one's cult library.

Sale Price 24.19
List Price 27.99
Buy Now
3rd Party 125.92
In Stock.
See what people are saying about this story or others
See Comments in Forum
Previous Next
Pre-Orders
Tomorrow's latest releases