Jack Reacher returns with his particular brand of justice in the highly anticipated sequel Jack Reacher: Never Go Back. When Army Major Susan Turner, who heads Reacher's old investigative unit, is arrested for Treason, Reacher will stop at nothing to prove her innocence and to uncover the truth behind a major government conspiracy involving soldiers who are being killed. Based upon Jack Reacher: Never Go Back, author Lee Child's 18th novel in the best-selling Jack Reacher series, that has seen 100 million books sold worldwide.

Immediately, in the opening moments of 'Jack Reacher: Never Go Back,' the filmmakers take a few minutes to demonstrate the hero's badassery. You know, just in case anyone wanders into this by accident, they know the titular character is exceptionally good at what he does, which is never directly expressed or actually explained. At least, not outside of him repeating to everyone he encounters throughout this decently satisfying, 118-minute actioner that he's an ex-Major and people should really stop addressing him as such. Don't you hate it when strangers greet you with the respect you deserve and earned, which is also mentioned a few times? Joking aside, however, the whole affair quickly establishes Reacher's calculating über-coolness under pressure and when everything seems stacked against him. After single-handedly assaulting four men outside a roadside diner, he calmly informs the sheriff arresting him how the next couple minutes will end for him, which happens exactly as predicted.

The sequence is meant to not only bring a smile to those already familiar with the character, who was first introduced back in the 2012 adaptation of the Lee Child crime thriller, but also to remind them of his efficiency at serving justice. At the same time, director Edward Zwick, working from a script he co-wrote with Richard Wenk and filmmaker Marshall Herskovitz, takes this as an opportunity to hurriedly relate the events with the film's true plot, which is essentially again solving a murder mystery to prove the innocence of a fellow soldier. The twist, this time around, is Reacher (Tom Cruise) being incriminated with similar charges and dragged deeper into a larger conspiracy involving drug-trafficking and the selling of weapons to insurgents. The filmmakers also give the decorated military investigator some depth with the possibility of a daughter (Danika Yarosh) he never knew existed. Sadly, other than proving a pest or a handy device for moving the plot, nothing of real significance or substance comes of this subplot. 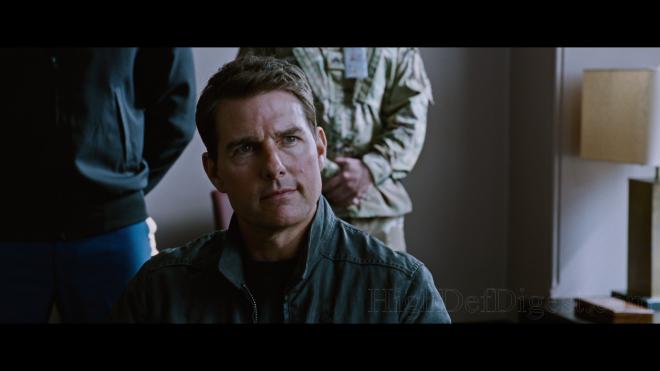 That's because our attention is intently fixed on completing the mission. That is until somebody suddenly remembers a certain paternity issue needing a swifter resolution than the actual task at hand, which it does in the most convenient brushoff imaginable. It's near deus ex machina quality writing, folks! Nevertheless, the daughter is ultimately a pawn for injecting both the plot and our hero some gravitas, and I must admit it worked to a small degree. Further revealing Reacher as a complex individual is the reason for taking on this dangerous operation. And as if often the case, he risks it all for a woman in Major Susan Turner (a pleasing enough Cobie Smulders), who now does the job Reacher left. Some mild over-the-phone flirtation warrants their first meet-and-greet, but when he arrives in DC for a possible love connection, he learns she's been arrested on espionage charges. Do military prisons allow conjugal visits, or must Reacher whip out his particular set of skills to get this romance going? And the latter it is!

Things quickly escalate from there because asking questions about the Major's impending trial draws the attention of some very powerful people who don't like strangers snooping around their business. Those people, the shadowy company Parasource run by General James Harkness (Robert Knepper) and a coldblooded mercenary (Patrick Heusinger), are made known pretty early on. At first, this seems as though taking away much of the film's thrill and purpose. However, that's not the point of 'Never Go Back.' It functions very much like a standard police procedural where the fun is not so much in revealing the culprits as it is in simply piecing the whole thing together. Zwick and company don't bring anything new to the table or stray from the basic blueprint, but they make it an enjoyable popcorn movie. It's not quite at the level of its predecessor, but it's good to see Reacher vulnerable against a formidable foe. And the final shots of our drifter hero — homage perhaps to 'The Incredible Hulk' TV series — adds a nice touch to the character's mythology while leaving the door open to future installments.

Paramount Home Entertainment brings 'Jack Reacher: Never Go Back' to Blu-ray as a two-disc combo pack with a flyer for an UltraViolet Digital Copy. The Region Free, BD50 disc is housed inside a blue eco-vortex case with a DVD-9 on the opposing panel and a glossy, lightly-embossed slipcover. At startup, viewers are taken straight to a static menu screen with music.

The ex-Major turned vigilante is pulled backed into service with a generously beautiful 1080p/AVC MPEG-4 encode, providing viewers with plenty to appreciate in the 35mm photography.

The picture is so sharp we can make out the little bit of stubble in the face of Tom Cruise and the tiniest little wrinkle around his eyes and cheekbones. The other men show five o'clock shadows while individual hairs are distinct in the "mercs-r-us" cuts and in the ladies' sock bun hairstyles. The lines along buildings, furniture and other various items in the background are plainly visible throughout while close-ups reveal minute, negligible blemishes in the lifelike facial complexions of the cast. Reacher's leather jacket is worn, wrinkled and cracked, but Turner's uniform is clean and pressed with fine detailing of the fabric and texture.

Presented in a 2.39:1 aspect ratio, a thin veil of natural grain washes over the picture, providing it with an appreciable film-like appeal. The video also displays excellent contrast with crisp, clean whites, allowing for excellent visibility into the far distance and making daylight exteriors pop. Black levels are equally outstanding, most notably during nighttime sequels and in the clothing where we can make clear difference between the shades of The Hunter's all-black assassin outfit. The darkest portions of the frame also never obscure the finer details within the shadows, giving the high-def presentation a lovely three-dimensional feel on a few occasions. Bright, vivid primaries, particularly reds and blues, shower the frame with life and energy while full-bodied secondary hues provide a great deal of warmth, and skin tones are healthy and appropriate to the climate from beginning to end.

Ready to save the day, Reacher steadily marches forward armed with a determined and excellent Dolby Atmos soundtrack. It doesn't really measure up to expectations for an action thriller or go toe-to-toe against some of the best we've heard in the format. However, the object-based mix stands its ground, delivering justice with expertise and efficiency.

The whole thing is a front-heavy affair with a majority of the action spread across the entire front soundstage. Surprisingly, this is where the movie really shines and takes advantage of the new surround sound codec, as a variety of effects fluidly and convincingly move between channels. Many of those same noises trickle discretely into the front heights for creating a half-dome wall of sound that's just as overwhelming as it is highly engaging. The mid-range is terrifically dynamic and extensive, exhibiting room-penetrating clarity during the loudest segments, while a powerfully robust low-end provides each punch, gunshot and explosion with potent weight. In the midst of the mayhem and chases, vocals remain distinct and precise with outstanding intonation in the more emotionally-driven moments.

Interestingly, neither the rears nor the ceiling channels display a great deal of activity, which is not to say that there isn't any. Only, that those channels don't appear to be utilized as effectively as would be expected. Of course, there is the occasional bits of debris and echoing effect, all of it coming from specific action sequences, sprawling in every direction for generating a mostly satisfying soundfield. The music, too, bleeds into the sides and above along with a few subtle atmospherics, like the bustle of city traffic, helicopters flying overhead, the loud shaking inside an airplane, the cheering celebration in New Orleans and the blasts of firework bursting high in the sky. And in spite of these positives, the lossless track never fully immerses the listener in a truly spectacular way that compares to some of the best object-based soundtracks.

Also worth noting is that I experienced a few minor audio dropouts since downloading the latest firmware update on my Oppo player.

Though not as good or satisfying as its predecessor, 'Jack Reacher: Never Go Back' is nonetheless an enjoyable action thriller. With Tom Cruise and Cobie Smulders, the sequel is a decent follow-up that adds nicely to the character's mythology and future installments. The Blu-ray arrives with a near-reference picture quality and an excellent audio presentation. With a good but still middling collection of supplements, the overall package is worth a look.

Sale Price 6.49
Buy Now
3rd Party 6.49
In Stock.
See what people are saying about this story or others
See Comments in Forum
Previous Next
Pre-Orders
Tomorrow's latest releases