John Turturro shines in the lead role in Barton Fink the Coen Brothers' (Miller's Crossing, Fargo) hilarious satire set in the 1940s Hollywood. Fink is a New York playwright who reluctantly relocates to Hollywood to write screenplays. Ordered to write a low budget screenplay about wrestling, Fink manages to type one sentence and then...nothing! Although his chatty insurance salesman neighbor Charlie (John Goodman) helps out by teaching Fink about wrestling, the clock ticks, the temperature rises, and Fink's life spins more and more out of control.

Early in their careers, Joel and Ethan Coen made a point of jumping from film genre to film genre, each different than the last but all inspired by classic Hollywood. Their first three features were, respectively, a noir thriller, a screwball comedy and a period gangster drama. For the most part, all of them were received well by critics, though often with a reservation that the brothers were more concerned with imitating the work of others than creating something original of their own. This complaint was unfair even at the time, but many critics of the day had trouble parsing the Coens' evolving style. That attitude started to change when their fourth film, Barton Fink, swept three top prizes (Best Director, Best Actor and the Palme d'Or) at the 1991 Cannes Film Festival, finally entrenching the Coen brothers as genuine American auteurs.

That's not to say that Barton Fink is without any obvious influences. It's practically overflowing with them. However, even more than their earlier works, this film is a mash-up of multiple disparate styles that might otherwise seem unresolvable when put together, but somehow coalesce into something decidedly the Coens' own. The characters patter as if in a Preston Sturges comedy, yet the hero winds up experiencing a closed-room psychological meltdown a la Roman Polanski with touches of horror surrealism by way of David Lynch. (That hairdo is pretty telling.) These things shouldn't work together, but the Coens have a strong vision that puts each puzzle piece in the right place.

The story is set in 1941, between World Wars. John Turturro stars as the title character, a pretentious New York playwright who fancies himself both the voice of the common man and a member of the rarified intellectual elite at the same time, so blinded by his own arrogance that he sees no contradiction in these two attitudes. He can speak for the average working class bloke on the street, but he certainly isn't going to be one.

Stifling his contempt for the base art form known as "the pictures," Barton heeds his agent's advice to move to Los Angeles and take a paying contract with a major Hollywood studio. So as not to be cut off from the lifeblood of the common folk he espouses so much love for, he refuses to stay in a writer's bungalow on the studio lot and instead takes up residence in a seedy, decaying hotel. This wretched hovel soon becomes his own personal hell as Barton develops a crippling case of writer's block and is unable to complete his first assignment. His attempt to seek the assistance of a fellow writer he admires – a washed-up, alcoholic novelist played by John Mahoney channeling William Faulkner – bears little fruit. Further distractions come from an obnoxious hotel neighbor (John Goodman, never better) who would seem to be exactly the salt-of-the-earth that Barton claims to be writing for, if only Barton were capable of listening to another person or seeing beyond his own bullshit. Also, if he ever paid attention to anything, he might notice that there's something very wrong about the guy. 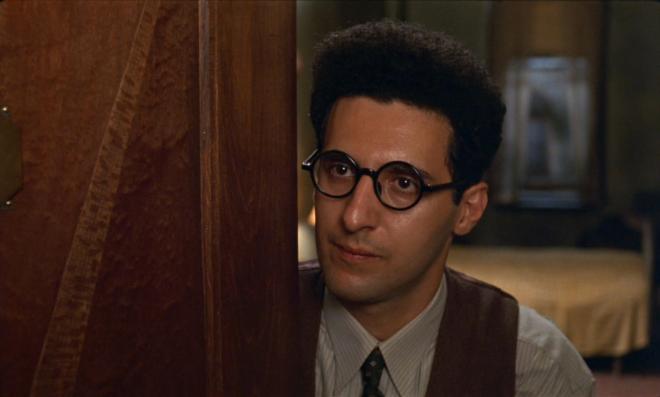 For much of its running length, Barton Fink is a witty, biting satire of behind-the-scenes Hollywood. Michael Lerner gives a delightfully showboating performance as the blustery studio head who takes an uncharacteristic interest in Barton's work and demands immediate results. More stellar supporting turns come from the likes of Tony Shalhoub, Judy Davis, Steve Buscemi and others. The film is also an examination of the writer's process with a back-handed dissection of the old "tortured artist" trope. As it goes on, the story turns increasingly darker, more metaphorical and surreal.

Barton Fink is a complex, layered work from a pair of artists operating at the peak of their abilities. However, it's also a particularly arch, cold and alienating piece that will turn off many audiences. (Significant amounts of screen time are spent watching wallpaper peel.) This would likely account for its poor box office showing.

The Coens are often accused of being cruel to their characters, and that's never truer than here. While I'm sure the brothers love Barton, as they love all their characters, the guy is frankly an asshole. For all his talk of writing for the common man, he finds all forms of mass entertainment contemptible and beneath his talents. Ultimately, most of his problems are of his own creation, and would probably clear up if he'd just move out of the damned hotel and let the studio set him up someplace nicer. This is all deliberate, of course. Barton wants to be tortured, because he believes that artists only achieve their best work through suffering, and the Coens are happy to indulge him, piling on one calamity after another. It gets to be a bit much, especially in the film's climax, which steps just a bit too far into surrealism and absurdity and breaks some of the earlier spell.

For as much as Barton Fink was a breakout success for the Coen brothers on the worldwide filmmaking stage, I still consider their previous movie (the flawlessly structured and constructed Miller's Crossing) to be the best of their early efforts. Nevertheless, I find new things to enjoy in this one every time I watch it.

Inexplicably missing on the format until now, Barton Fink finally makes its Blu-ray debut in North America (leaving The Ladykillers as the only Coen brothers feature still without a Blu-ray). Kino Lorber has licensed the title from 20th Century Fox, which last issued it on DVD in 2003.

Overseas, Universal distributed a Blu-ray throughout Europe in 2012. The new Kino Blu-ray does not appear to share any assets in common with that release. It has a different video transfer and several exclusive bonus features. Even the cover art, which harkens back to the original theatrical poster, is a different image than the one Universal used.

As an American theatrical feature released in 1991, Barton Fink was almost certainly projected at the "flat" 35mm standard of 1.85:1. The 2012 Blu-ray that Universal released in Europe maintained that aspect ratio. On the other hand, Fox has instead consistently chosen to transfer the movie to home video – from Laserdisc to DVD and now the master for this new Blu-ray (which I assume Fox provided to Kino) – at the old European standard of 1.66:1, exposing a bit more picture information at the top and bottom of the frame. As a result, the image is slightly pillarboxed in the center of a 16:9 HD screen with small black bars on the sides. Whether this decision was made by the filmmakers or someone else at the studio, I have not heard. The film's framing looks well balanced at 1.66:1 for the most part, though on a few occasions the opened-up image exposes extra dirt and hairs (and even what appears to be the edge of a matte box) that would have otherwise been masked off at 1.85:1.

I can't say with certainty whether the Blu-ray comes from the same master as the 2003 DVD or if the film was rescanned more recently. Watching the Blu-ray leaves the impression of it being an old master. The disc's 1080p/AVC MPEG-4 encode is pretty soft on the whole. In many scenes, detail and texture are merely adequate. However, I must acknowledge that some scenes are excellent. The film elements suffer from quite a bit of dirt and speckles, and dark scenes can be extremely noisy.

This film was the first time the Coen brothers switched cinematographers, from their former partner Barry Sonnenfeld (who branched off into directing his own movies) to Roger Deakins. His photography is gorgeous from start to finish. Practically every shot is a masterpiece of lighting and composition. Fortunately, the strength of Deakins' work frequently outshines the limitations of the video transfer.

I have not had the opportunity to watch the European Blu-ray from Universal for myself. Reading some reviews of it and looking at some screen shots, it appears to have problems with electronic sharpening. However, it also looks to have more real detail in most scenes than Kino's effort. I wish a compromise could have been reached between the two discs. 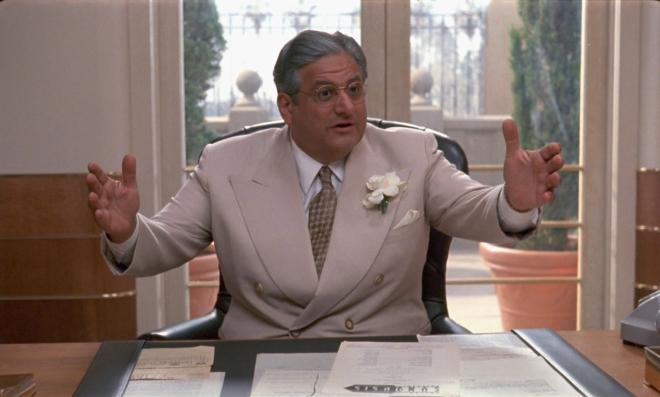 The only soundtrack option on the Blu-ray is a DTS-HD Master Audio stereo track. Despite the lack of discrete multi-channel, this is a matrixed encoding that will expand extremely well, even aggressively, to surround speakers (and heights if you have them) when decoded with whichever upmixer you favor. Barton Fink has a fantastic sound design filled with fascinating ambient tones and sound effects that contribute to the heightened atmosphere and the character's fragile psychosis. Listen to the ring of the bell in the hotel lobby, or the air whooshing sounds every time characters open doors. All of this is brought out with terrific clarity and fidelity in the lossless track.

The centerpiece of the movie's sound work is the outstanding musical score by Carter Burwell, which sounds rich and lovely. The soundtrack may not have any slamming bass, but I actually enjoyed it more than many of the big-budget action movies I've watched recently. 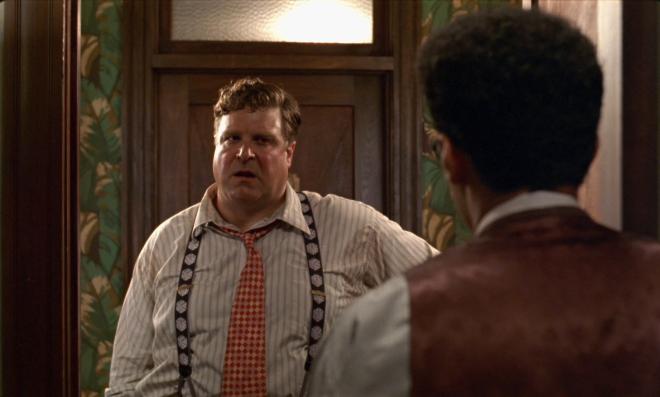 Prior DVD editions of the movie were light on extra content. The Blu-ray carries over the following: 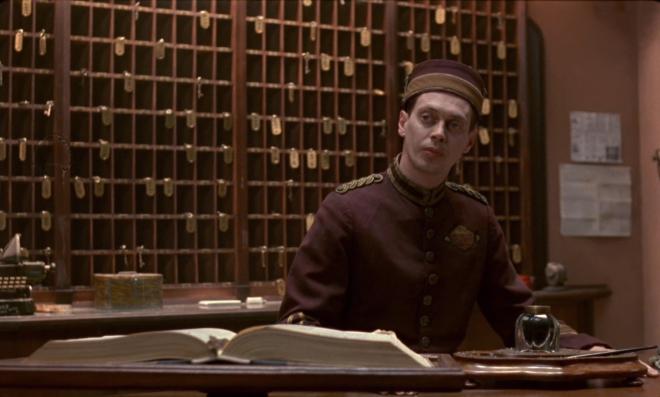 The Blu-ray adds a few new features, copyrighted to Kino Lorber in 2017. 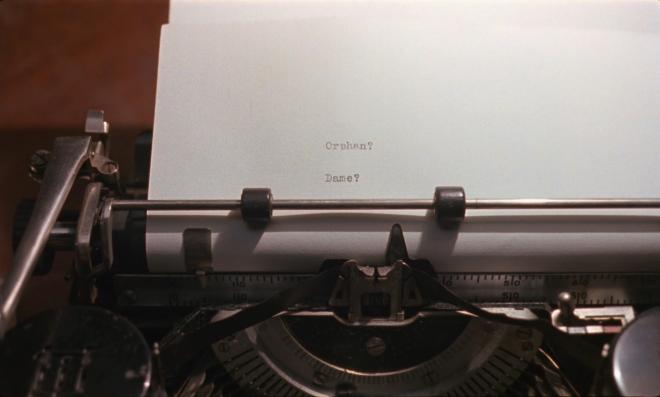 The DVD from 2003 also had a still gallery that didn't make the transition to Blu-ray. It doesn't seem like much of a loss.

I don't personally feel that Barton Fink is either the best or my favorite of the many films directed by the Coen brothers, but it was an important step in their careers and remains a darkly funny Hollywood satire that grasps for deeper symbolic meaning. The Blu-ray from Kino Lorber could look better, but is adequate. The sound quality is better than the video, and the disc has some interesting new bonus features. Fans of the filmmakers will find the disc acceptable… at least until the Criterion Collection gets its hands on the film some day and gives it a more thorough restoration.

Sale Price 25.05
List Price 29.95
Buy Now
3rd Party 20.21
In Stock.
See what people are saying about this story or others
See Comments in Forum
Previous Next
Pre-Orders
Tomorrow's latest releases