Comedy is a curious thing. What's funny at one point in our lives may not seem so humorous later on. And as attitudes, morals, and trends change, so too does the comic climate that lampoons them. Maybe that's why the work of playwright Neil Simon is so seldom revived today. A big deal in the 1960s, '70s, and '80s, Simon penned a string of successful comedies that incisively skewer common human foibles, but because the plays are so firmly anchored in a specific time and place, many of them - like 'The Odd Couple,' 'Barefoot in the Park,' and 'The Prisoner of Second Avenue' - now seem dated and a tad stale. As Simon learned firsthand, the danger of being hip is that it's easy to soon become passé.

'The Goodbye Girl' is one of a handful of original screenplays Simon wrote during his heyday. A love letter of sorts to his then wife, actress Marsha Mason, the film showcases a classic situational conflict and predictably plays it out. It's warm, often amusing, and boasts a high cuteness quotient, but the preciously constructed dialogue is too reminiscent of a stage play and the ending is a slap in the face to women in general and feminists in particular.

A typical boy-meets-girl, boy-and-girl-hate-each-other-and-later-fall-in-love yarn, 'The Goodbye Girl' forces its two protagonists together during the film's opening minutes. When perky Paula McFadden (Mason) learns through a "Dear Jane" letter she's been dumped by her live-in lover - a narcissistic actor who abandons her and her precocious 10-year-old daughter Lucy (Quinn Cummings) for a plum movie role - she's devastated. But before Paula can dry her eyes, another actor, Elliot Garfield (Richard Dreyfuss), shows up on her Manhattan doorstep claiming her scumbag ex-boyfriend has sublet the apartment to him. An enraged Paula refuses to vacate, and after a series of heated exchanges, the two agree to share the flat. Of course their oil-and-water personalities continually clash, and his bohemian lifestyle rubs her the wrong way, yet as time goes on, their defenses and facades crumble, and they begin an unlikely love affair. But will Elliot turn out to be just another selfish Mr. Wrong for this perennial "goodbye girl," or the knight in shining armor who has eluded her all her life?

I loved 'The Goodbye Girl' as an impressionable adolescent back in 1977, and so did a lot of other people. It earned Academy Award nominations for Best Picture, Actor, Actress, Supporting Actress, and Original Screenplay, but like many of Simon's works, the comedy emanates from situations, not his characters, who aren't particularly dimensional and often seem present only to spew a barrage of wisecracking one-liners. (This is especially true of Lucy, the generic wiseass kid, who becomes ever more annoying as the film progresses.) As nicely packaged as it may be, the story doesn't reflect reality, its myriad contrivances often douse the sparks the script generates, and the topical references have grown stale - three big reasons why the movie remains stuck in a time capsule.

Simon tries to bring some old-movie charm to the tale - Dreyfuss occasionally (and gratingly) impersonates Humphrey Bogart (in fact, the screenplay was originally titled 'Bogart Slept Here') - but his efforts fall flat and leave a corny aftertaste. And though his dialogue has a lilting rhythm to it, especially when Paula and Elliot bicker, it often sounds too scripted. Whereas Woody Allen's jokes tend to emanate from the natural flow of conversation, Simon's exchanges seem constructed with a pre-conceived punch line in mind. The laughs are still there, but you can see the wheels turning, and that inhibits our involvement with the characters. (Interestingly, Oscar would choose Allen's 'Annie Hall' screenplay as the year's best over Simon's 'Goodbye Girl' script.)

At age 30, Dreyfuss became the youngest actor in history to win the Best Actor prize (Adrien Brody has since supplanted him), and though his performance brims with manic energy, it hardly seems worthy of an Academy Award. The role of Elliot fits Dreyfuss like a glove (both men possess oversized egos and exude a distasteful cockiness), and he was probably better suited to it than Robert De Niro, who was originally cast. He and Mason, who oozes cuteness as Paula, really click, and their chemistry keeps the film afloat.

Unfortunately, the film's message - the only truly fulfilling thing in a woman's life is a successful relationship - doesn't play well today. With apologies to Virginia Slims, the fairer sex has come a long way, baby, since 1977, and 'The Goodbye Girl' is just contemporary enough to rankle modern women who have fought long and hard for equality. Though its wholesome charm remains and a few lines still provoke laughter, this Neil Simon rom com has begun to creak around the edges, and is notable more for its wistful sense of nostalgia than anything else. 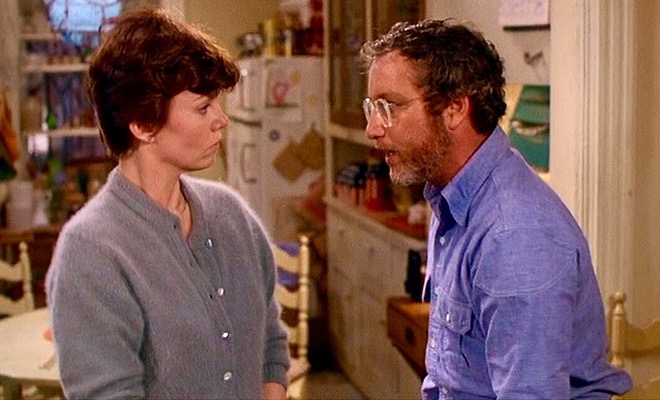 'The Goodbye Girl' arrives on Blu-ray packaged in a standard case. Video codec is 1080p/AVC MPEG-4 and audio is DTS-HD Master Audio 2.0 mono. Once the disc is inserted into the player, the static menu without music immediately pops up; no previews or promos precede it.

The folks at Warner Archive have spruced up 'The Goodbye Girl,' providing a vibrant 1080p/AVC MPEG-4 transfer that breathes new life into this almost 40-year-old film. Though colors still look a tad faded, solid contrast and clarity crystallize the image, beefing up detail levels on background elements and enhancing depth. Grain levels fluctuate - the texture is quite noticeable in some scenes, but absent in others - and the source material is free of any grit and debris. Blacks are dense, whites are bright, and flesh tones appear natural and remain stable throughout the course of the film. Close-ups are slightly soft, yet still exhibit plenty of fine details, and though shadow delineation is quite strong overall, a bit of crush occasionally creeps into the picture during night-time sequences. All in all, this is a clean, watchable presentation that will certainly please fans of this romantic comedy.

The DTS-HD Master Audio 2.0 mono track supplies clear, well-modulated sound. Atmospherics like torrential rain and cityscape activity come through nicely, and sonic accents, such as screeching car wheels and claps of thunder, are crisp and distinct. A wide dynamic scale handles all the highs and lows without a hint of distortion, and no age-related hiss, pops, or crackles intrude. Dave Grusin's innocuous score fills the room with ease, and all of Simon's witty repartee is clear and comprehendible. Standard and workmanlike, this track seamlessly complements the action, and that's about all we can ask of it.

The film's three-minute original theatrical trailer is the only extra included on the disc, and it is presented in high definition. A retrospective featurette reuniting Simon, Mason, and Dreyfuss would have been a terrific addition, but no such luck.

Say hello again to 'The Goodbye Girl.' Though this warm-hearted Big Apple comedy about the unlikely romance between a quirky, egotistical actor and a recently jilted, insecure dancer with a sassy 10-year-old daughter still has some charm, it's begun to show its age. Neil SImon's dialogue has lost much of its sting, the '70s attitudes no longer ring true, and the precocious kid act has grown stale, but the chemistry between stars Richard Dreyfuss and Marsha Mason remains palpable, and their spirited interplay drives the film. Warner Archive's Blu-ray presentation is distinguished by solid video and audio transfers, but the lack of supplements is disappointing. Fans of rom coms, however, will still get a kick out of this odd-couple comedy, and that's why 'The Goodbye Girl' is still worth a look after all these years.

Sale Price 17.99
Buy Now
3rd Party 16.66
In Stock.
See what people are saying about this story or others
See Comments in Forum
Previous Next
Pre-Orders
Tomorrow's latest releases