There are good movies, there are good-bad movies, and then there are the kind of stupefying awful, dreadful movies that don't just waste your time, but threaten to suck precious brain cells right out of your head. Unfortunately, 'Into the Blue' was an experience like that for me, one that felt more akin to a having lobotomy than going to see a fun popcorn flick.

I'm not sure why I have such an knee-jerk reaction to this picture, but maybe it is because the word "inconsequential" hardly does it justice. Essentially a remake of 'The Deep,' the Peter Benchley novel that had already been turned into a movie once before in 1978 starring Nick Nolte, Jacqueline Bisset and Robert Shaw, 'Into the Blue' is slick, fast paced and populated with good-looking, half-naked people -- and there is nothing wrong with that. However, 'The Deep' just wasn't that great to begin with (God rest Benchley's soul, but 'Jaws' remains his only truly great novel), which leaves 'Into the Deep' as little more than the MTV version of a book that probably didn't need to be made the first time, let alone twice.

As the movie begins, young lovers Jared (Paul Walker) and Sam (Jessica Alba) are living on a leaky boat in the Bahamas, spending their days searching for buried treasure. Though so far unsuccessful, I guess when you look like Walker and Alba, and get to have sex with each other all day long, little else matters. Then one day Jared's friend Bryce (Scott Caan) flies in from the mainland with a new girlfriend, Amanda (Ashley Scott). They all decide to go out for a little underwater spelunking expedition, and miraculously discover two very different treasures -- jewels and cocaine -- that could make them wealthy overnight. Immediately, Jared and Bryce's friendship is tested, because Jared and Sam don't want to do anything illegal, but Bryce knows the value drugs can fetch on the open market -- and greed is a powerful motivator when you're living on a rickety old boat.

Meanwhile, none of this escapes the attention of Bates (Josh Brolin), a mysterious, wealthy fellow treasure hunter. But Bates, in addition to sharing the same unfortunate last name as a famous Hitchcockian serial killer, is a pretty darn creepy fellow. He's been wanting to hire Jared for a while now, but Sam just doesn't trust him. And she's right -- Bates and cocaine are not strange bedfellows, and when he gets a whiff of the white powder waiting down below, well, things start to turn dangerous.

To be fair to 'Into the Blue,' it is not a pretentious film. It wants to be nothing more than a fun summer popcorn flick, one full of riveting adventure and awash with pretty undersea photography. It also is a refreshingly physical movie, with most of its stunts completed live in real locations, and none of that phony CGI crap. So for that, I give it points. But yet there is still something deadening about the whole affair, a vapidness and indifference on behalf of the cast and filmmakers that drags any sense of fun and adventure the film might have mustered right down to the bottom of the sea. 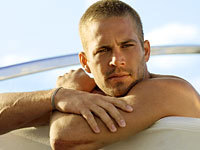 A big part of my problem with 'Into the Blue' is that I grew up on movies like 'The Deep' and 'Jaws,' which featured adult characters played by... actual adult actors. Nolte, Bisset and Shaw did not look like runway models (well, maybe Bisset), and quite frankly, Walker and Alba project less life experience than Nolte's big toe. Walker's monosyllabic delivery is like an anchor that drags down every scene he's in, while Alba amazingly makes Bisset's performance look like an Oscar-worthy tour de force. (Okay, maybe Alba isn't that bad -- she's just blank.) Of course, a fair portion of the blame must also go to director John Stockwell, who seems more interested in creating a big summer blockbuster than telling a truly engaging, exciting story. I've actually enjoyed some of the director's previous films, especially 'Blue Crush,' another water-based flick that is just as dopey plot-wise as 'Into the Blue.' But at least 'Blue Crush' seemed like it was made by a filmmaker who was hungry and passionate, not just merely hoping to push his career to the next level.

Ultimately, by the time 'Into the Blue' careened into what felt like its third climax (really, this film does not know how to end), all I could think to do was to hold my breath. Seriously. Here's a little drinking game if you get as bored with the movie as I did. See if you can hold your breath as long as the characters do. Sometimes they seem to go minutes without a single bubble emanating from their mouths, but if you can beat them, take a drink. It worked wonders for me, and by the time I made it to the end credits, I was so drunk I couldn't tell what had killed more brain cells -- the vodka, or the movie. Glub, glub.

'Into the Blue' gets its high-def premiere on Blu-ray, which I guess is fitting given its title (har har) and the fact that this is a very bright and sparkly movie. Alas, this transfer still left me a bit disappointed, because I was never very happy with the picture quality of the previous DVD release of 'Into the Blue,' and I expected more this time. The old DVD suffered from overdone colors, a lack of detail and an overly dark appearance, problems which are improved here, but not significantly.

My main problem with both the Blu-ray and standard DVD versions of 'Into the Blue' is that colors seem oversaturated and way too processed. Granted, the Blu-ray is more vibrant with even richer hues, and despite all that color tweaking, detail is noticeably better. But what I felt should have looked like a glorious, natural, sun-baked movie instead looks like an MTV video from hell, with impossibly unreal colors and skintones that look waxy instead of realistic. Also wacky is that contrast is blown out with too-bright whites, yet the transfer also has a weirdly dark cast. 'Into the Blue' really is a first for me -- a transfer both soft and harsh at the same time. Subsequently, sharpness and shadow delineation suffer greatly. Fall-off into black is often steep, with little detail visible in more dimly-lit scenes.

On the plus side, 'Into the Blue' is one of the more consistent Blu-ray transfers I've seen lately from Sony, with an even sense of depth to the image throughout. Compression artifacts are also not a huge problem, though the darkest scenes could be a tad noisy and I did detect the occasional bit of posterization on sunsets and other static backgrounds during dissolves and fades. Still, despite these nitpicks, I will concede that my main problem with 'Into the Blue' is an aesthetic one. I know that this transfer's more debatable qualities were probably a conscious choice on behalf of the filmmakers, so I'm being judgmental. But I just didn't find watching 'Into the Blue' to be a visually pleasing experience.

Though I don't like the way 'Into the Blue' looks, I do like the way it sounds. Sony has produced a very nice uncompressed PCM 5.1 surround track for the flick, and it is a very aggressive, enveloping experience.

'Into the Blue' has moments of terrific sound design. Not only is the directional positioning of action sounds accurate and well-placed across the entire 360-degree soundfield, but there is a level of environmental ambiance that is quite rare. I greatly enjoyed the very effective uses of subtle sounds like waves and wind, which really heightens the film's action and drama. Dynamics are overall solid, though low end is a bit more subdued that I expected, which is odd given the attention to detail in the rest of the mix. Dialogue is also balanced a bit low in the mix for my taste, though never unintelligible. Despite the minor issues I mentioned, 'Into the Blue' sounds quite good.

Though most of Sony's Blu-ray releases have been hit or miss in terms of supplements, 'Into the Blue' contains all of the extras found on the standard DVD release, save for the film's theatrical trailer. It's a straightforward package of supplements, but fans of the film should enjoy this stuff.

Let's start with the 20-minute featurette "Diving Deeper: The Making of 'Into The Blue.'" It's pretty surface and fluffy, with lots of the usual on-set backpatting between a cast and crew with high hopes that they are making a blockbuster. However, it does offer a pretty good digest version of the production, from conception to completion. No great shakes, quite honestly, but fairly entertaining nonetheless.

Surprisingly, the featurette is superior to the screen-specific audio commentary with director John Stockwell. The track is a bit slow and plodding, with Stockwell focusing almost exclusively on the technical aspects of filming. However, he does have a sly sense of humor that is welcome, and he does offer up a few entertaining cast stories (particularly a bit about Paul Walker's dog, and the film's almost fetishistic devotion to displaying Jessica Alba's half-naked flesh). Is it enough to warrant a full listen? Probably not.

Rounding out the extras is an assortment of ten Deleted Scenes, which run a total of 17 minutes. Stockwell provides optional commentary, and as even he admits, most of the cut footage was either redundant or failed to expand upon the scope of the film The technical quality of the material is also hit or miss, with some scenes minted from a workprint with an unfinished soundtrack.

Unfortunately, I found 'Into the Blue' pretty mind-numbing, even though it is well photographed and full of beautiful -- if vapid -- actors. However, the film does have its fans, and I have seen far worse popcorn flicks than this. Sony has put together a solid Blu-ray release, with a great soundtrack and the same extras as found on the standard DVD release. I really didn't like the transfer, but that is more because of its aesthetic attributes than any technical flaws. So if you are just looking for a sharp picture in which to show off your new Blu-ray setup, I'd suggest giving 'Into the Blue' a rental before buying.