I just don't quite get Vin Diesel. At least as an action star. Not just because he got his ass whupped in 'Saving Private Ryan,' or was the voice of 'The Iron Giant,' or speaks in such a monotone that makes Dolph Lundgren seem intelligent-like. No, there is just something too lighthearted, almost congenial, about the actor. After having seen him on talk shows and in that horrendous flick 'The Pacifier,' he just seems too... sweet. Despite all the muscles, the shaved head and the bad-ass sunglasses, he looks like a guy who would rather grill you up some BBQ in the backyard than beat you to a pulp.

Maybe that's why I couldn't really take 'xXx' seriously. It plays more like an unintentional satire of male action movie cliches (not to mention a pale imitation of the lesser James Bond sequels) than the serious spy film it could have been, and seems to want to be. Would you believe Diesel as Xander Cage, the world's most notorious "underground" thrill seeker, who the NSA decides to draft in as a secret agent? Why would the U.S. government tap some guy -- who is apparently more famous than Tony Hawke -- to infiltrate an secret Russian crime ring? (Really, I'm not making this up.) Diesel as Cage doesn't so much blend into his surroundings like a supersleuth as stand out like a fashion model. Had only Jean-Paul Gaultier done his costumes, I would have thought I was watching the "Die Another Day" number from Madonna's last tour, not a real spy movie.

First, make no mistake, this is an eye-popping transfer at a glance. Sony has wisely chosen to launch Blu-ray with a variety of films that feature bright colors, plenty of action and are of a recent vintage. So when you first fire up this disc, it does look nice. But just like that joke in 'Clueless,' this transfer is ultimately like a painting by Seurat. From far away, it looks like art. Up close, it's just a messed-up bunch of dots.

That aside, there are still problems with this presentation. Colors, though quite vibrant, sometimes suffer from a slight bit of bleed and chroma noise. Often it can be very irritating, such as the nightclub scene about midway through the film. The deep purples, blues and greens look a bit fuzzy, and detail suffers -- shockingly, the standard-def release looked a bit more stable to me than the Blu-ray. The transfer can also be wildly inconsistent in sharpness and depth. Some scenes look excellent (especially the brightest outdoor scenes, such as Vin Diesel's plunge off the side of a bridge), with great clarity to the image, while others look no better than a flat, two-dimensional DVD. I'd like to blame the Samsung player, which its reported faulty noise reduction circuitry, but given how sporadic such problems are, it is hard not to fault the disc itself. 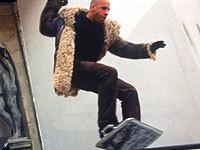 Unlike the transfer, I really have no complaints here. Loud, highly directional and enveloping for most of the film's runtime, this is a very strong soundtrack. Dynamic range is quite impressive, with very full mid- and high-range, and powerful deep bass. The subwoofer really puts out during the film's action scenes, and you won't be disappointed if you crank this puppy. The surrounds are also fully engaged for most of the film's runtime, and cleverly used, too. Sound effects, dialogue and the score are expertly placed throughout the soundfield, and imaging often feels transparent. Sure, it lacks subtlety, but if that's what you want, why are you watching 'xXx?'

Ultimately, my only complaint is that, once again, center channel dialogue is often drowned out by all the sonic fireworks. (Don't keep your finger very far away from your remote's volume button -- you're gonna need to adjust it.) Though, perhaps the sound designers were only doing us a favor, because who really wants to hear Vin Diesel's dialogue anyway?

I can only surmise that a.) Sony decided to drop the extras to maximize the bits for the video and audio; b.) someone in licensing couldn't clear the rights to the supplements for Blu-ray; or c.) I'm just too stupid to find the extras on the menu. However, all I was able to locate on the disc is a batch of Previews for other upcoming Blu-ray disc releases, like 'S.W.A.T.' and 'Stealth.' Unfortunately, the quality of these trailers isn't very good, and I wonder why they couldn't squeeze at least something from the other DVD releases on here. How about the director commentary (hey, it's audio only, that can't take up much space, right?) Or at least the film's own trailer? Geesh!