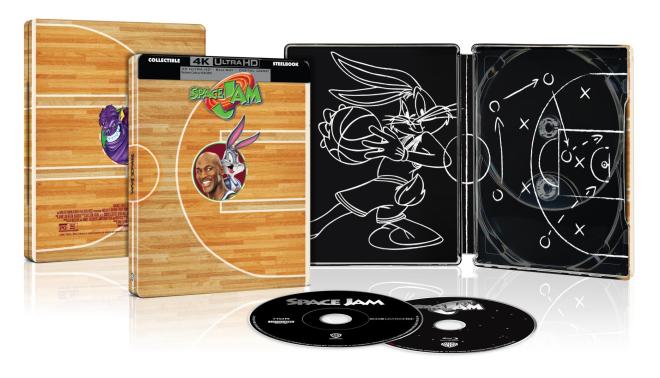 The Nerdlucks, a gang of space creatures, have been dispatched by their boss to kidnap Bugs Bunny and his Looney Tunes cohorts. Bugs challenges the aliens to a basketball tournament: if the Looney Tunes win, they'll remain on Earth. Bugs knows he needs some serious help, but basketball's best players are all having their skills "absorbed" by the aliens. Of course, there's a baseball player he happens to know...

20 years is a heck of a long time when you take a step back and really think about it. What were you doing in 1996? Were you graduating college? High School? Were you even born yet? In that time an entire generation of children has been born, grown up, and is about to vote in their first presidential election! 20 years just so happens to be the exact span of time since Michael Jordan laced up his proprietary sneakers and joined forces with the likes of Bugs Bunny, Daffy Duck, and Bill Murray to dunk some basketballs on some no good animated villains. Yes, you read that right, Joe Pytka's 'Space Jam' is now 20 years old. It may feel its age at times, but the show is still a heck of a lot of fun.

The diabolical Swackhammer (Danny DeVito) is in desperate need of some new attractions at his sinister amusement park, MoronMountain - and he's got his eye set on enslaving Bugs Bunny and the rest of the Looney Toon gang! When they're challenged to a championship game of basketball to decide the outcome of the conflict, Swackhammer, and the Nerdlucks pull a fast one and kidnap the NBA's top stars from Earth! But thankfully the Looney Toons can count on their old pal Michael Jordan to get some air and dunk on these tyrannical fools!

It's bizarre to think that I was fourteen years old when 'Space Jame' came out in theaters. I was coming through eighth grade when this was a big hit with my peers. Unfortunately for me, I was hitting my cynical years of teenage life and puffed up my chest, let out sighs of indignation, and steadfastly refused to admit that this movie even existed - but it didn't take long for my cynicism to wane. Curiosity got the better of me when 'Space Jam' made it's way to one of the premium movie channels, I gave it a look. It wasn't before long that I begrudgingly began to enjoy myself. While I still don't think 'Space Jam' is a great movie by any stretch, it succeeds at providing some clever entertainment.

What I also find interesting about this film's 20-year legacy is the fact that an entire generation of people grew up knowing Michael Jordan as a figure of expensive-yet-comfortable athletic footwear rather than one of the greatest basketball players who ever took to the court. 'Space Jam' more or less marked Jordan's return to basketball after a short stint in the MLB. Granted, the man officially left the NBA in 2003, even someone born in 1996 would barely be seven years old at the time. Not to sound too much like an old curmudgeon, kids these days just don't know His Airness the way kids of my generation did. So it is on that level that I am glad that Warner Bros. has decided to unleash this 20th-anniversary release.

Say what you will about Michael Jordan's acting ability (he's at least better than Shaq), it's the rest of the film's stars and characters that provide the funny stuff. Bugs is the wise-cracking sly rabbit he's always been while Daffy is the cantankerous stick in the mud. That routine never gets old and 'Space Jam' makes great use of it. A big highlight of the movie is Danny DeVito's Swackhammer. The man's practically a living cartoon as it is so it's kind of fun to see him get to live out a Loony Toon lifestyle. Bill Murray drops by to do his thing and Wayne Knight provides some solid little laughs. I still don't think 'Space Jam' was tremendous success, the blending of human elements with the traditional 2D hand drawn characters never really feel as organically achieved as they did with 'Who Framed Roger Rabbit?' but the show is bright, colorful, and provides 87 minutes of mindless fun - even to this 34 year old grown-ass man.

'Space Jam' makes its 20th-anniversary debut as an unfortunate recycle. Aside from the inclusion of the DVD, an Ultraviolet Digital HD voucher, and some snazzy Steelbook packaging, this is the exact same Region Free BD25 disc as the previous release. Right up to the static image main menu, the disc loads to the same FBI warning and everything.

Unfortunately, as a 20th-anniversary release, this disc is a simple repackaging of the previously released disc. This is the exact same disc as was released in 2011 sporting the same middling 1.85:1 1080p transfer. While details are as good as they can be - at least with the human characters - there is a prevailing softness to the image that keeps the animated elements from ever really coming to life. There is also some odd pixelation for the opening title (see closing image). On top of that, for such a bright and beautiful and colorful film, colors are actually a bit muddled here. It's the Loony Tunes, you expect some bright and bold primaries with plenty of pop, but throughout most of this film's run they never really shine. They always look a shade or two too dull to be exciting. It was a decent transfer for 2011, but this one could have used a fresh scan. Thankfully the source is in great shape without any nicks or scratches or damage of any kind. Black levels are pretty decent and there is an appreciable sense of depth. It's a good looking transfer, just not amazing.

Thankfully, 'Space Jam' enjoys an impressive DTS-HD MA 5.1 audio mix. The film was always loud and active and this mix replicates those effects. The voice acting and human dialogue come through clearly with a natural effect. Scoring and atmospheric sound effects round out the mix and give the audio track a great sense of atmosphere and dimension. Imaging is also very strong as there is a ton of surround content keeping all of the channels alive - it's obviously most active during the big basketball moments - but the cartoonish nature keeps things moving and fun. There is also a great sense of LFE tones going around, especially surrounding Swackhammer and the Nerdlucks, any time they enter the scene there is a nice sense of dread and ambiance to them that is really fun to pick up and hear.

Audio Commentary: One would think that a commentary with Director Joe Pytka and Bugs Bunny and Daffy Duck would be at the very least entertaining right? Unfortunately, the stellar voice acting of Dee Bradley Baker and Billy West covering Daffy and Bugs respectively is actually more annoying than anything else. There's no real amazing information about the film offered up. Pytka provides some tech stuff but it all sounds like a badly written comedy skit than an informative commentary track.

Jammin' With Bugs Bunny and Michael Jordan: (SD 22:32) This is an odd duck sort of behind the scenes feature that talks about the history of the Loony Toons as well as the genesis of the project with some bits and bobs with Michael Jordan and the making of the film. It's not bad, but it's nothing incredibly informative either.

Did you love 'Space Jam' 20 years ago? Do you still love it? That's certainly a question fans of the film and newcomers are going to have to ask themselves when considering a purchase. Now that a 'Space Jam 2' is apparently in the works, this one may be worth taking another look at. However, if you already bought the previous Blu-ray release back in 2011, there is absolutely nothing new here, other than some new packaging and the inclusion of the DVD. I enjoy this flick, I own the 2011 release, but without anything new to the show, there's nothing about this release that I can recommend making the purchase for. It's one for the fans and specifically those fans who didn't already buy the previous release.

Sale Price 43.88
Buy Now
3rd Party 6.99
In Stock.
See what people are saying about this story or others
See Comments in Forum
Previous Next
Pre-Orders
Tomorrow's latest releases