The Audio section of this review was written by M. Enois Duarte from his review of the 2D Blu-ray release of 'Dinosaurs Alive!' Both versions feature an identical DTS-HD M.A 5.1 soundtrack. Audio scoring for the Blu-ray 3D version reflects his scoring.

For most of my life I have been fascinated with Dinosaurs. It's truly amazing to think that 65 million years ago they roamed the earth and were the dominant force on this planet. My interest in dinosaurs started when I was seven years old and saw the movie 'Jurassic Park' for the first time. That movie just made Dinosaurs seem cool, and after I saw it I enjoyed thinking about what is would be like to see a T-Rex in real life! In my later years, once I realized how farfetched it would be to bring Dinosaurs back from the grave, I became more interested in the science of fossils and how dinosaurs became extinct. It was my interest in Dinosaur skeletons that brought me to see 'Dinosaurs Alive!' in 3D for the first time. In late 2009 I was at the Chicago Field Museum with a few friends, checking out the massive skeleton of the T-Rex named Sue. We noticed that 'Dinosaurs Alive' was playing in 3D at the museum, so we decided that it might be fun to check the movie out.

'Dinosaurs Alive' provides an introduction to the history of Dinosaur life on Earth 65 million years ago. The movie starts off with an exciting fight sequence, and then goes on to show how two Dinosaurs suddenly died in a fight and their bones were fossilized locked in that battle. This introduces us to what the movie is about. We learn that places like the Gobi Desert in Mongolia and the Badlands of New Mexico are the current hot-spots for finding dinosaur fossils. The movie goes on to highlight the the breakthrough discoveries. The movie also highlights how new discoveries continue to be made, and just when you think you know something, you learn something new to change your thinking.

'Dinosaurs Alive' had a lot to say and teach (most of it is very interesting and educational), but it feels crammed into a short movie. That, mixed with the dull narration by Michael Douglas, produced mixed results. I did learn a few new things, but I feel they could have been presented in a more exciting way. As for the visuals, they were very cool at times, but the animation is nowhere near the standard of Hollywood blockbusters (which is to be expected). There are a few fun fight sequences (which are clearly designed for 3D viewing) that fans of dinosaurs should enjoy.

Overall, 'Dinosaurs Alive' is a good educational overview of Dinosaur history. It provides some basic knowledge and fun facts that people will appreciate. It also offers some exciting animated 3D Dinosaur action sequences. At just over 40 minuets in length, this movie is a good option for anyone looking to learn a little bit about Dinosaurs and be entertained by some fun animated sequences. 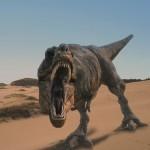 Coming into this viewing I had pretty high expectations for 'Dinosaurs Alive!' Having seen the excellent 2D release for the movie, the 3D version had some high standards to live up to. Having also experienced this film in 3D during the screening at the Chicago Field Museum I knew what to expect from this.

'Dinosaurs Alive!' arrives on Blu-ray 3D with an above average 1080P/AVC MPEG-4 transfer that let me down a bit. Though this transfer may have its problems, it still has some good things going for it. As with the 2D release, colors during the live-action sequences are rich and vivid and give off a very realistic feel for a desert setting; skin tones and textures are spot-on without a hint of any digital artifacts. The 3D effects during the live-action sequences are also quite nice, depth is extremely realistic and textures remain solid. Some of the shots looking out into the Gobi Desert are simply breathtaking, almost like looking out your window. Additionally, images of dinosaur skeletons in the museum shots are extremely realistic with the added element of the depth 3D provides.

Unfortunately, not everything about this release was great. The most noticeable problem was the abundance of shots with ghosting (double image) problems. Ghosting is most noticeable in the darker museum images as well as some of the computer generated Dinosaur sequences. I also noticed a few sequences where shapes were a bit off in 3D, meaning at times objects appeared to be compressed to fit into the shot (possibly a result of the conversion from IMAX 3D to 3D Blu-ray). For me, this was most noticeable during a shot looking straight up the long-neck of a Brachiosaurus; the frame just seemed to squeeze a little tight, compressing the image. These moments were few and far between, but still popped up from time to time.

'Dinosaurs Alive!' is an above average transfer that will provide moments of "wow" footage. Unfortunately the overabundance of ghosted images and occurrences of misshapen objects bring down the overall quality of this transfer. 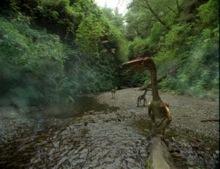 On the audio side of things, the DTS-HD Master Audio soundtrack accompanying the doc is also enjoyable and satisfactory. Only, it's not highly active or blow-your-socks away type of stuff. The narration is key and beautifully delivered with room-penetrating clarity. The other two channels in the soundstage arrive with a few random sounds and a good mid-level to give the mix welcoming warmth. Ambient effects are occasionally employed to envelop and immerse the viewer into some dinosaur action, but it's more loud and flashy than discrete or convincing. Low bass adds a heavy punch to those same scenes. Overall, the track offers entertaining and adequate enjoyment of the feature. 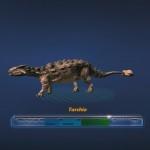 'Dinosaurs Alive!' offers up a few special features, all of which are carryovers from the previous 2D Blu-ray release. Here is what you can expect from the 3D release. 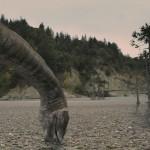 Overall, this is a good 3D release. The documentary tries to fit a little too much information into a 40 minute show, but it's still entertaining and educational if you can look past the dull narration. With the addition of above average 3D visuals, a very good making-of documentary, and an educational Meet the Creatures feature, I would encourage Blu-ray 3D enthusiasts to take a good look at this one and consider a purchase.

List Price $24.98
Buy Now
See what people are saying about this story or others
See Comments in Forum
Previous Next
Pre-Orders
Tomorrow's latest releases