Having been a film and DVD reviewer for almost a decade now (yikes!), I quickly came to learn that how we ultimately respond to a certain movie is largely influenced by our expectations. I'm as guilty as anyone of letting a great film be ruined by my pre-conceived notions of what it should and shouldn't be, and conversely giving thumbs up to a mindless piece of crap simply because I was feeling particularly chipper that day. (Heck, I gave 'Showgirls' four stars simply because it is so damn entertaining, so I have a lot of explaining to do.) Case in point is 'RV,' a film that I know is not a great movie, nor even a good one, but because I went into this Blu-ray review with such negative expectations I couldn't help but be pleasantly surprised. Now, I don't know if I can go as far as to actually recommend that you see this movie, but I'd be lying if I said I didn't enjoy all ninety-six, silly minutes of it.

Robin (Do I Still Have a Career?) Williams stars as Bob Munro, the head of your typical new-millennium, upper middle-class dysfunctional family. There's his aging but still hot MILF Jamie (Cheryl Hines), emotionally distant son Carl (Josh Hutchersen) and sharp-tongued daughter Cassie (Joanna "JoJo" Levesque), who would rather be anywhere than on a vacation with mom and dad. Seems Bob had planned a surprise family trip to Hawaii, but at the very last minute his boss Todd Mallory (Will Arnett) sets him up on the biggest sales pitch of his career. Now, it is off on a cross-country trip to the Rockies in time for dad's big meeting, by way of a bright green RV with the words "Rent Me!" emblazoned on its side. Detours, disaster and all-round craziness is the roadmap for comedy as the Munros learn that on a family vacation, no one can hear you scream...

The movies that influenced 'RV' are pretty obvious; namely 'National Lampoon's Vacation,' 'Meet the Fockers,' 'Lost in America' and the John Hughes flicks 'Planes, Trains & Automobiles' and 'The Great Outdoors.' However, unlike all of those films, which relied as much on situational comedy as sight gags, the humor in 'RV' is largely slapstick. A road movie like this is all about the absurdity the family will find themselves trapped in, and 'RV' certainly throws plenty of ridiculous scenarios at us. We get the usual run-ins with unfriendly wild animals, sewage disposal, reckless driving resulting in an RV crash, and of course the requisite detour to Yellowstone. Indeed, when the "highlight" is a scene where the RV lets loose with a geyser of excrement, you know where the comic sensibilities of 'RV' ultimately lay.

And, of course, as the Munros will learn all too quickly, traveling in a recreational vehicle means that you have to spend the night in an RV park with other "RV people." The film's best conceit, however cliched, is pitting the upper-crust, "civilized" Munros against the white trash Gornicke clan, a fellow vacationing nuclear unit as tight-knit as the Munros are insulated. Jeff Daniels is nicely cast against type as the Gornicke's crazy patriarch Travis, and Kristin Chenoweth perfectly channels the spirit of Peg Bundy as his wife Marie Jo. I would never call 'RV' a film that is even remotely "political,' but the juxtaposition between the Munros and the Gornickes gives the film a much-needed boost of social satire. With so much of the film revolving around Williams running from, screaming at or being chased by an RV, it is ironic that the movie's best moments come when director Barry Sonnenfeld and screenwriter Geoff Rodkey finally regain some faith in their story, and let the humor flow out of the characters, not the gimmicks. 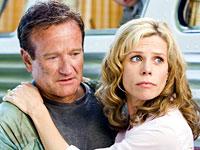 Then there is Robin Williams. Some reviewers complained that he never fully busts loose in 'RV,' harnessing his usual manic energy in what is largely a reactive role. For me, though, that was actually a plus. Unlike his far more showy, out-of-control turns in 'Good Morning, Vietnam' and 'Mrs. Doubtfire,' here Williams is essentially the straight man to a recreational vehicle, and it would have just been too much otherwise. Of course, he still delivers plenty of his usual mugging and idiosyncratic line readings, yet admirably leaves the film's best quips for Daniels, Hines and Levesque. (I guess when you are trying to act next to a RV spurting a giant tower of poo, why be selfish?) Williams also anchors the film in some ways, for if he went too over-the-top 'RV' would have spun completely off its wheels. I also suspect Williams knew that by the time audiences got to the movie's utterly predictable, wholly unbelievable, shamelessly sentimental feel-good ending, if he didn't give Bob at least some semblance of humanity, the film would have collapsed totally under the weight of its own postmodern archness. So I'll hand it to Williams -- he almost got me to believe in Bob when, right before the end credits roll, he gets everyone together for a group hug and realizes that the family that RVs together, stays together. Almost.

Presented in 2.40:1 widescreen, 1080p video and MPEG2-encoded, 'RV' benefits from a very vibrant, appealing image. Indeed, these are some of the boldest colors I've seen in a long while on a home video transfer, with director of photography Fred Murphy's extreme use of primary hues coming through loud and clear. (You certainly can't say 'RV' doesn't look eye-popping.) Blacks, contrast and sharpness are all excellent, providing a great sense of depth and detail to the image. And as the majority of 'RV' takes place during bright, daylight exteriors, the transfer often looks quite three-dimensional, delivering a few real "wow factor" moments that high-def is all about.

Unfortunately, there are some problems, too. A thin veneer of grain is prominent throughout, which is exacerbated during the dimmer interior scenes. Colors can also hampered by oversaturation, resulting in what looks noise in any large area of a static, solid hue. I also noticed compression artifacts, namely during a couple of dissolves that suffered from posterization. Detail also fluctuates slightly, with some scenes looking flatter and more two-dimensional than others. Overall, though, despite these drawbacks 'RV' offers a generally solid and appealing image.

Sony offers up an uncompressed PCM 5.1 surround track for 'RV' (English and French Dolby Digital 5.1 options are also included) and it is a fun soundtrack. The track is not incredibly aggressive or consistently engaging, but there are moments of inspired sound design. Surround use is pretty good, with some enjoyable tricks involving slapstick sound effects, various wildlife scurrying about and of course the roar of the RVs themselves. As the mix is still primarily front heavy, imaging between channels is rather obvious, but as the movie is so over-the-top it only adds to the over-the-top attitude of the whole affair. Frequency response is also rather good, with robust mid-range and adequate low end. Certainly, 'RV' will not win any awards for sonic excellence, but it it fits the film's zany sensibility just fine.

Sony hasn't produced an amazing batch of extras for 'RV,' but then this is the kind of movie that hardly deserves a two-disc set packed with supplements. And while what we do get is fluffy if fun, there is one featurette in particular that is a standout.

However, first up is an audio commentary with director Barry Sonnenfeld. Now, Sonnenfeld is always a fun guy to listen to, sort of like that cherubic next-door neighbor who's always yapping on about something, but you don't care because he's entertaining. Here, Sonnenfeld is enthusiastic as ever, discussing how various scenes were shot (surprisingly, a good deal of 'RV's "outdoor" scenes were actually done on soundstages) and how great the cast was to work with. Also kinda neat is that this is a rare "Telestrator" audio commentary, meaning Sonnenfeld can draw little circles and basic shapes on the screen, which are generated on the disc as little motion graphic overlays. Unfortunately, this does grow a bit wearisome as the film wears on, and ultimately feels like a gimmick. Sonnenfeld also begins to lapse far too often into silence, or starts repeating himself with redundant technical details. So, as much as I like Sonnenfeld, and Telestrator-injected or not, this one is probably best left for diehard 'RV' fans only (all two of you).

Next up are no less than five featurettes. However, all but one are fairly straightforward, if slick, and the package runs only about 30 minutes in total. Both "Robin Williams: A Family Affair" and "JoJo: The Pop Princess" are really just cheerleading sections for both performers, but alas we learn little about either of them, other than everyone in the cast had a good time together ("A&E Biography" these ain't). Also a bit too surface-y is "On Set with Director Barry Sonnenfeld." It does contain some nice making-of footage, though it ultimately just reiterates what we already learned on the commentary. But the nadir is certainly "The Scoop on Poop" -- honestly, I never thought I'd see an entire featurette devoted to the art of rigging a giant geyser full of shit. God bless Blu-ray!!!

Thankfully, all is not lost. "RV Nation: The Culture of Road Warriors" doesn't reinvent the wheel but at least it offers a unique perspective compared to the other, shallow featurettes. All of the main cast, including Williams and Jeff Daniels, weigh in on their own RV experiences -- turns out both have had their fair share of cross-country lunacy, and Daniels even drove himself up to the film's Vancouver location shoot in a rented RV. Of course, "RV Nation" is hardly a deep featurette, but at least we get a little much-needed, real-life perspective on the movie's themes.

'RV' is a movie I thought I would hate but ultimately enjoyed, even if only as a Monday afternoon time-waster. No, it ain't a great movie, or even a very good one, but if you're in the right mood it can be rather fun. Sony has produced a solid Blu-ray release for the film, with a generally fine transfer, a nice sound mix and about as fluffy a batch of extras as you'd expect for a film like this. Though I can't really recommend this sight unseen for purchase, it is at least worth a rental for the easily amused.