After battling with the Tall Man in Phantasm: Oblivion, a battered Reggie wanders through the desert in search of his missing friend, Mike. After recovering his 1971 Hemi ‘Cuda, Reggie is targeted by two of the Tall Man’s Sentinel Spheres and destroys them. He awakens suddenly to find himself sitting in a wheelchair pushed by none other than the elusive Mike! Although overjoyed by their reunion, Reggie is in this alternate dimension an aged and weary old patient in a psychiatric ward. And only he remembers their battled and bloodied past with the Tall Man. Reggie must travel between dimensions and discern what is reality in order to confront the mysteries at the heart of a decades-long struggle against evil. He is met with new and familiar faces along the way, and an epic showdown on the Tall Man’s home world awaits!

Given the history and track record of the franchise, 'Phantasm: Ravager' didn't really stand a chance of being any good. Each successive entry is, in all honesty, worse than the last, growing sillier and sillier while progressively embracing the wacky absurdity of its surreal premise. A meager budget and limited resources has contributed significantly to their production value, and it definitely shows in this fifth installment to the series. The acting ranges from pedestrian to downright laughable, and the CG visual effects are of the bargain-bin variety that meets the minimum requirements expected of typical SyFy programming. The entire movie was obviously shot in a single location in the same general area, and the cinematography is of that sterile, cost-effective style better suited for daytime television. Yet amid the dreamlike zaniness, creator Don Coscarelli has somehow managed to expand on The Tall Man mythology in each entry with enough interest to keep his fanbase coming back for more. And ultimately, this is no different.

For fans already invested with Mike and Reggie's intensely feverish journey against the twisted, phantasmagoric mind games of The Tall Man (Angus Scrimm in his final screen appearance), 'Ravager' is an essential watch. This is partly because the movie is advertised as the final chapter to the franchise where it all finally comes to a head and brings closure to the series. For the most part, director David Hartman, working from a script he cowrote with Coscarelli, who serves as producer, attempts to explain everything and provide a satisfying conclusion to the madness seen in the previous movies. And it isn't difficult to piece together where he's going with the narrative. It opens a short time after the events in 'Oblivion' — which was nearly twenty years ago — with Reggie (Reggie Bannister) wandering the desert and once again battling a pair of Sentinel Spheres. But surprise! Our ice-cream truck driving hero is actually in a wheelchair at a hospital with Mike (A. Michael Baldwin) sitting on a bench. 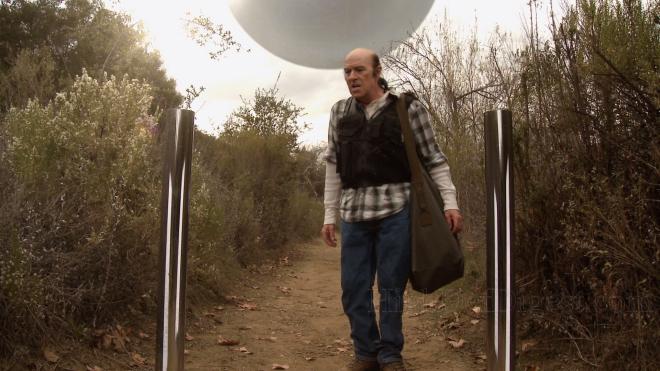 If you can't guess where the filmmakers are taking this, don't fret because they're about to make it perfectly clear when Mike, oh so delicately, smacks us in the face with Reggie suffering from early onset dementia. Take a minute to speculate the impact this revelation has on the rest of the series and then, make a wild prediction on how it's all going to end. There's very little chance of being wrong, as I soon discovered about three-quarters into the movie's brisk but still sluggish 85-minute runtime. But rather than being a complete disappointment, Hartman and his crew take full advantage of the plot, delving into the premise that it's all part of Reggie's mental illness head on, and turn it into something surprisingly interesting. The story constantly jumps in and out of Reggie's dreams, quickly blurring the line between reality and fantasy. One minute he's on the road still searching for Mike, and the next he's in another dimension as part of a guerrilla resistance group. And as it progresses, that line grows blurrier and more chaotic.

Amazingly, 'Ravager' is a decent follow-up and improvement over the previous two sequels, despite its very noticeable cheapness, nicely tying in the rest of the franchise into a neat and tidy conclusion that's reasonably satisfying. Although it doesn't explore the deeper implications of its premise, credit must be giving to the filmmakers for a rather daring attempt to transcend perceived limitations. This is an astute tale that creatively echoes the poignant journey of its hero, who ultimately rides into the sunset with a fulfilled, gratified smile on his face. Each movie shows Reggie's crusade to care for Mike, feeling personally responsible for Mike's well-being after losing his parents and his older brother, Jody. With that understood, The Tall Man as a corporeal representative of death takes a double meaning because Reggie not only fights to protect Mike from death's clutches, but he's also fighting for himself. It may be cheap looking, but 'Ravager' is a nice finish to the franchise and a final goodbye to Angus Scrimm.

Well Go USA brings 'Phantasm: Ravager' to Blu-ray on a Region Free, BD25 disc inside a blue eco-elite vortex case. After several skippable trailers, viewers go to a static menu with standard options along the right side and music.

The latest installment to the 'Phantasm' series debuts on Blu-ray with a strong but rather mediocre AVC-encoded transfer, looking every bit like the result a cheap, micro-budgeted production. The economical photography shows decent contrast and brightness balance that's consistent, but it still carries the air of sterile, digital video lacking texture and better suited for daytime television. Highlights are continuously blooming with mild posterization, most noticeable in daylight exterior or the sunshine through windows, and there are several instances of aliasing.

Presented in a 1.78:1 aspect ratio, the high-def transfer does offer a few positives worth admiring. Black levels are true and accurate, providing the image appreciable depth and dimension. Colors aren't always reliably bright, but the overall palette is full-bodied with animated primaries and good secondary hues. Fine lines and objects are also sharp with plenty of visible details in various articles of clothing and furniture while facial complexions are healthy and revealing.

The final battle against The Tall Man is armed with a good and adequate DTS-HD Master Audio soundtrack, but much like the video, the design largely feels cheap and littered with various low-cost Foley effects. Dynamic range is rather limited and never pushed into the upper frequencies, creating a somewhat restrained and uniform soundstage. Interestingly, a variety of background activity occasionally trickles into the left and right front channels for a more engaging presentation.

However, Christopher L. Stone's score benefits the most from the high-rez audio, exhibiting some appreciable detailing and separation. The music also effectively bleeds into the surrounds for a more amusing and satisfying soundfield. Dialogue reproduction is flat and dull, but well-prioritized in the center. Low bass is average and noticeably lacking during action sequences, but it's adequate enough to provide the movie with mild presence and weight.

With each successive entry, the 'Phantasm' franchise has been progressively growing worse. However, 'Ravager,' the fifth and final installment, does a decent job of bringing the entire series to a close with an interesting and debatably satisfying conclusion to the franchise. The Blu-ray arrives with a somewhat disappointing audio and video presentation. With a very small assortment of supplements, the overall package is a rental at best while worth a look for loyal fans of the franchise.

Sale Price 10.84
List Price 29.98
Buy Now
3rd Party 2.27
In Stock.
See what people are saying about this story or others
See Comments in Forum
Previous Next
Pre-Orders
Tomorrow's latest releases