While attending a retrospective of his work, a filmmaker recalls his life and his loves: the inspirations for his films.

So says acclaimed director Sandy Bates (Woody Allen), who just might be echoing a pronouncement the man who created him might have made at the time he produced the intensely serious 'Interiors' in 1978. After a string of highly successful and goofy comedies that culminated with the Oscar-winning 'Annie Hall,' Allen took an unexpected detour into drama, and the controversial decision divided audiences and critics alike. Though many praised the departure, as well as the depth and maturity that defined 'Interiors,' an equal number of Allen devotees felt betrayed. Who did Allen think he was, writing and directing such a pretentious, enigmatic, and depressing film? For a sizable group of disgruntled fans, Allen couldn't return fast enough to the zany milieu where he first struck comic gold.

Allen's films - even his farces - always examine multiple facets of the human condition, so the polarized reactions to 'Interiors' puzzled and frustrated him. Though Allen denies the autobiographical connections between himself and Sandy Bates, it's tough not to believe 'Stardust Memories' is a reflection of Allen's conflicted state of mind at the time. The story of a beloved comedic director at an artistic crossroads who feels compelled to make movies with deeper messages and lasting resonance - despite critical, popular, and corporate resistance - screams Woody Allen in 1980. And with the insight, humor, and artistry that have made him one of America's finest cinematic craftsmen, he explores this personal nugget and transforms it into something very special indeed.

Whereas 'Interiors' blatantly salutes (okay, copies) the tone and style of Allen's idol, Ingmar Bergman, 'Stardust Memories' takes a 180-degree turn to honor Italian director Federico Fellini and his self-reflexive masterpiece '8-1/2.' Allen adopts an avant-garde attitude as he lampoons the crazy culture of celebrity, pseudo-intellectual interpretation of art, frantic search for meaning in an out-of-control world, and insufferable narcissism that energizes and ruins so many artists. Like a Fellini film, 'Stardust Memories' often seems disorganized and disjointed; eccentrics and caricatures often dominate the frame (the collection of striking, unique faces Allen assembles and showcases is staggering) and we never know quite where the movie is going. As Allen boldly bombards us with a barrage of dazzling, incongruent images, it seems as if style will trump substance, yet upon closer examination, the disjointed pieces fall into place and the film's purpose and construction become brilliantly clear.

The plot, however, is typically wispy. Dissatisfied with the gravity of his latest production, movie executives order a disgusted and exasperated Bates to devise a new ending for his newest film. "I look around the world and all I see is human suffering," Sandy tells them. But he can't argue with their deadpan, bottom-line response: "Human suffering doesn't sell tickets in Kansas City." So Sandy sets out to find an ending that will satisfy his mainstream critics and fans without betraying his personal vision. While on this journey, he reluctantly attends a retrospective of his work, where he tries to evade swarms of parasitic vultures who seek his time, money, and endorsements, and must interact with dozens of gushing fans who ask vacuous questions and, much to his chagrin, ceaselessly extol the virtues of his "early, funny" films.

He also juggles the attentions of two distinctly different women - Daisy (Jessica Harper), a young intellectual with high-minded ideals, and Isobel (Marie-Christine Barrault), a free-spirited, earthy Frenchwoman with two young children who might offer Sandy the stability he craves. And yet he still can't shake the memory of his passionate affair with the bewitching Dorrie (Charlotte Rampling), a beautiful, neurotic actress who suffers from bipolar disorder. (It is rumored Dorrie is based on Allen's ex-wife, Louise Lasser, who enjoys a hilarious turn as Sandy's private secretary in the film.) All these women act as muses through whom Sandy hopes to find solace, contentment, and artistic salvation...if he doesn't succumb to a nervous breakdown first. Though as a child he wowed relatives and friends with his magic tricks, Sandy, hard as he tries, can't magically transform his life or films.

Like many Allen tales, 'Stardust Memories' features a protagonist (dare I say alter-ego?) who desperately searches for meaning in a chaotic society. "The human condition is so discouraging," Sandy says at one point, and as he navigates an emotional minefield he hopes not only to find himself, but also to get away from himself and the pressures, distractions, and artifice that consume him. Through Sandy, Allen mocks his own conceit, egotism, and neuroses. He has a studio executive (played with delicious arrogance by an uncredited Laraine Newman) decry the self-indulgence of elite filmmakers who "try to document their private suffering and fob it off as art" (a criticism often leveled at Allen). He also exposes the shallowness of America's celebrity-obsessed culture and satirizes the pompous, ignorant manner in which we debate, interpret, and evaluate creative works...most notably, movies.

Because that's what 'Stardust Memories' is really about - how we watch movies, how they affect us, and how they mirror who we are. Are they profound or trivial? Necessary or superfluous? Or all of the above? The answer, so says Sandy/Allen, may simply lie in how we perceive the flickering images on the screen and what we demand from them. Do we want escapist entertainment or a sober reflection of our own lives? And can we even distinguish between the two? Throughout much of 'Stardust Memories' it's difficult to determine whether we're watching a scene from Sandy's life or one of his films. And it's that finely manipulated confusion that fuels the story and forces us to look at film - and a director's vision - in a different, more expansive manner. (Allen even gives two highly respected film critics, Judith Crist and Howard Kissell, bit parts as a nod to the cinema intelligentsia he so incisively spoofs.)

As usual, Allen's script is both funny and insightful. The clever one-liners we expect are here, as well as suggestive sexual banter, delightful non-sequiturs, neurotic musings, and plaintive pleas for understanding. (A scene in which Sandy seeks advice from a group of space aliens is especially amusing.) In addition, Allen, with more than a little help from cinematographer Gordon Willis, is at the top of his game visually. Stunning imagery abounds, making 'Stardust Memories' arguably Allen's most beautiful black-and-white film (and that includes 'Manhattan'). Almost every scene is inventively shot and impeccably photographed, so the eye remains constantly engaged. Many Allen critics deride his pervasive use of black-and-white film stock, claiming it's affected and arty, but for a satire like 'Stardust Memories' it's an inspired choice that enhances the movie's impact.

The film is also notable because it's the only Allen picture between 1973 and 1993 that doesn't star either Diane Keaton or Mia Farrow. Although I admire both actresses, their absence here infuses 'Stardust Memories' with a jolt of freshness and unpredictability. Rampling makes an exceptional Allen heroine - intimate and luminous one minute and coldly remote the next - while both Harper and Barrault create a comfortable chemistry with the actor that's natural and unexpected. Tony Roberts, Daniel Stern, and Anne DeSalvo punch up a few scenes, and in her film debut, 22-year-old Sharon Stone makes a brief but notable impression in the movie's opening moments.

'Stardust Memories' was not a success at the time of its release, but as Allen's legacy has grown, so has the reputation of this quirky, underrated classic that reveals more about its creator than most of his other 50-odd films. Though it may be more for the Allen connoisseur than the neophyte, this stimulating satire - to quote the song that plays over the final scene - is "oh so easy to love." And if you're a movie geek, like me, you'll love it that much more. 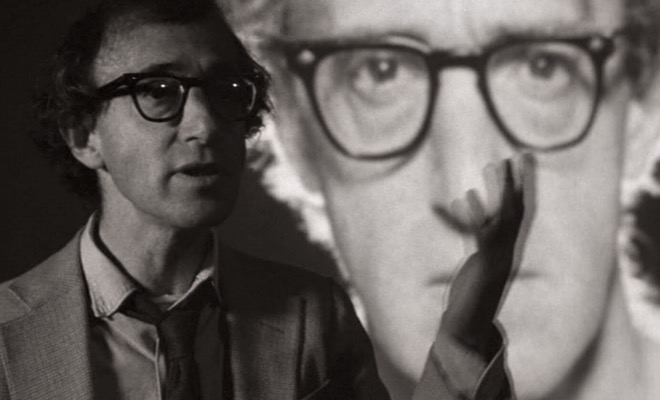 'Stardust Memories' arrives on Blu-ray in a limited to 3,000 edition packaged in a standard case. An eight-page booklet featuring an essay by Twilight Time columnist Julie Kirgo, three glossy black-and-white scene stills, and a reproduction of the movie's Spanish poster art is tucked inside the front cover. Video codec is 1080p/AVC MPEG-4 and audio is DTS-HD Master Audio 1.0. Once the disc is inserted into the player, the static menu without music immediately pops up; no previews or promos precede it.

Few filmmakers embrace black-and-white photography with as much enthusiasm as Allen, and few cinematographers maximize its potential as well as Gordon Willis. Though many cite 'Manhattan' as the duo's crowning black-and-white achievement, I feel 'Stardust Memories' eclipses it, and Twilight Time's terrific transfer beautifully showcases Willis' artistry. Sporting just enough grain to lend the image texture and a lovely film-like feel, this 1080p/AVC MPEG-4 rendering also benefits from exceptional clarity and contrast that maximize the impact of Willis' subtle shadings and bold brush strokes, both of which keep the eye constantly engaged. Deep black levels, crisp whites, and a myriad of in-between grays make the picture consistently pop, while superb shadow delineation adds a marvelous richness to the canvas. (Silhouettes are especially well defined.) Allen assembles a gallery of striking faces, and razor sharp close-ups allow us to drink in all the eccentric details. Background elements are always easy to discern, and only a couple of errant marks dot the pristine source material. Willis' exquisite photography is a joy to behold, and at last it's been properly honored and preserved. Thanks, Twilight Time.

The DTS-HD Master Audio 1.0 track is surprisingly vibrant. Sonic accents like sirens, a bike bell, and the deep exhale of a fire extinguisher  terrifically punctuate the action, as do the distinct - and purposeful - pops and crackles that accent the vintage jazz music selections. The orchestrations complement the visuals without overwhelming them, and the lengthy silent opening sequence is never marred by any hiss or static. Dialogue is properly prioritized and easy to comprehend, and subtle atmospherics nicely enhance exterior scenes. At the end of the day, it's still mono sound, but it's got more bite than most single-channel tracks.

Typical of Allen films on home video, no substantive supplements are included. Twilight Time does supply an isolated score track and the movie's original theatrical trailer, but that's it.

Introspective, insightful, and laced with plenty of wit and eccentricity, 'Stardust Memories' stands as one of Woody Allen's most personal films. The story of an acclaimed director at an emotional and artistic crossroads may seem flimsy on the surface, but there's much more here than meets the eye. Gorgeous cinematography by Gordon Willis, a quirky script, and standout performances from a lively ensemble cast all combine to create a strangely hypnotic work that satirizes art, commerce, psychology, and the culture of celebrity while celebrating the magic (and frustration) of moviemaking. Twilight Time's limited edition Blu-ray presentation may lack extras - par for the course for an Allen home video release - but first-class video and audio transfers enhance the impact of this superior film, which comes highly recommended.