I Want to Live!

A prostitute, sentenced to death for murder, pleads her innocence.

Barbara Graham was guilty of many things in her life, but if you believe 'I Want to Live!,' director Robert Wise's harrowing indictment of capital punishment, murder wasn't one of them. This edgy 1958 film paints an unvarnished yet decidedly sympathetic portrait of Graham, a so-called "good time girl" whose litany of petty crimes - fraud, prostitution, perjury, and quite possibly the worst of all, bad judgment - have been well documented. But when she hooked up with small-time crooks Emmett Perkins and Jack Santo, she upped the ante, and after a wealthy retired widow, Mabel Monohan, was found murdered in her California home, Graham's cohorts reportedly inflated her involvement in the crime, leading to her arrest, conviction, and ultimate execution in the gas chamber at San Quentin.

Graham continually and vociferously proclaimed her innocence, but a rabid press, who labeled her "Bloody Babs" and mercilessly exploited her checkered past, smeared her with biased stories while a shady police force did its best to seal her fate. Victimized by circumstance and society almost since birth, Graham - who was married three times, had three children, and compiled an impressive rap sheet in her short 31 years - defiantly lived outside the lines and paid a dear price for her transgressions.

'I Want to Live!' is a riveting account of the most celebrated episode in Graham's life. Though it vehemently professes to be factual, the film has since been exposed as a hodgepodge of truth and fiction. (Court records show Graham was present at the crime scene, but the movie puts her at home with her baby and drug-addicted husband, whom she conveniently kicks out shortly before the murder occurs, giving her no credible alibi.) Writers Nelson Gidding and Don Mankiewicz based their screenplay on Graham's personal letters, court testimony, and an array of newspaper stories by Pulitzer Prize-winning reporter Edward Montgomery - who at first preyed upon Graham, then championed her - but they also try hard to humanize and engender sympathy for their headstrong and often belligerent "heroine."

And they succeed. Yet any liberties the script takes with Graham's story don't diminish the ultimate impact of Wise's uncompromising depiction of it. Without trivializing her lawless actions and reckless behavior, the movie fast forwards through Graham's formative years so it can focus on the sensational crime, trial, and incarceration that defined her. The last half hour transpires on death row, and with a keen eye and firm resolve, Wise - who went to San Quentin to observe an execution so he could get the details right - methodically and meticulously chronicles the clinical procedures that must be conducted before a prisoner is put to death. We see orderlies unloading the cyanide eggs, mixing the dissolving solution, and preparing the gas chamber. We see the press soberly file in to bear witness, and watch Graham as she anxiously awaits her final reckoning while hoping for a miraculous last-minute stay. Wise doesn't sugarcoat any of these scenes, and though his recreation truncates the agonizing process, it is still almost unbearable to watch, producing uncomfortable squirms and a proper sense of outrage and repugnance.

Susan Hayward pulls out all the stops as Graham, embodying her wild, consequences-be-damned spirit. Graham doesn't just have a chip on her shoulder, she harbors a gaping chunk that she often brandishes with pride, and in a let-it-all-hang-out portrayal, Hayward sinks her teeth into Graham's outspoken, independent character. Though she tries a bit too hard during the film's early sequences, overdoing Graham's energy and spitfire, Hayward settles down once Graham lands in prison, beautifully expressing her anger, desperation, and, most powerfully of all, quiet resignation leading up to her final torturous moments.

From beginning to end, this is Hayward's show, and her tour de force performance screams Oscar. Her natural, raw acting style - she was electrifying as the alcoholic Lillian Roth in 'I'll Cry Tomorrow' a few years earlier - often won raves, but many of the pictures she appeared in weren't worthy of her talent. 'I Want to Live!' was a rare exception, and after four previous nominations, Hayward at last nabbed the Best Actress Academy Award.

And Wise, wisely, doesn't make her share the spotlight. First-rate actors like Theodore Bikel and Simon Oakland (best known for playing the psychiatrist in the final scene of 'Psycho') surround Hayward, but none had yet achieved a lofty stature, so they disappear inside their roles and never come close to overshadowing her. Their lack of renown also adds an extra hint of realism to the presentation.

The film is also noteworthy for its groundbreaking progressive jazz score, which won composer Johnny Mandel (billed here as John) a Grammy Award. As loud and unbridled as Graham herself, with a furious rhythm and passion galore, the often turbulent music perfectly complements the movie's themes and tempos, and paved the way for more non-traditional soundtracks in the future. (This is one score that really benefits from Twilight Time's standard issue isolated track [see below].)

'I Want to Live!' did not receive a Best Picture nomination, but Wise's superior direction earned a nod, as did the film's screenplay, black-and-white cinematography, sound, and editing. All the elements contribute to a powerful experience that - try as we might - is not easily forgotten. Few movies, before or since, have transmitted the anti death penalty message as cogently and succinctly - and without the aid of preachy speeches - as this unnerving drama, which carries more weight than dozens of public service announcements. Wise lays the issue bare, and lets his stark, indelible images do most of the talking. And they speak volumes. 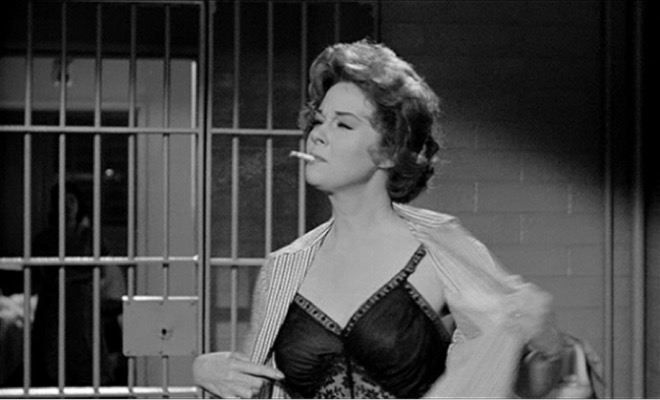 'I Want to Live!' arrives on Blu-ray in a limited to 3,000 edition packaged in a standard case. An eight-page booklet featuring an essay by film historian Julie Kirgo, black-and-white scene shots, and a color reproduction of the film's cover art is tucked inside the front cover. Video codec is 1080p/AVC MPEG-4 and audio is DTS-HD Master Audio 1.0. Once the disc is inserted into the player, the static menu without music immediately pops up; no previews or promos precede it.

'I Want to Live!' is a gritty, noir-ish tale, and Twilight Time's 1080p/AVC MPEG-4 transfer respects its roots. A nicely varied gray scale complements the stark black-and-white photography, lending the picture a consistently natural look, while a thin layer of grain adds welcome texture to the image. Superior contrast and clarity accentuate the cold prison interiors and dingy locales - a scene shot through a fine-mesh screen is particularly impressive - and sharp close-ups, excellent shadow delineation, and a spotless source print enhance the viewing experience. Rich black levels supply essential weight, background details are easy to discern, and no digital tinkering could be detected. Though a couple of scenes appear slightly soft, they can't diminish the quality of this stellar transfer.

The progressive jazz soundtrack for 'I Want to Live!' won a Grammy Award for composer John Mandel, and it's given the red carpet treatment on this clean, superbly modulated DTS-HD Master Audio 1.0 track. A wide dynamic scale handles all the screaming brass and pulsating percussion without a hint of distortion, and no age-related imperfections like hiss, pops, or crackles sully the purity of the music or disrupt the tense silences that permeate the film's final half hour. Dialogue can be a bit difficult to understand at times, especially during a couple of shouting exchanges, but most of the conversations are clear, and sound effects are crisp and distinct. The music, however, is the star of this track, and whether it's blaring or subtle, it perfectly shades the movie's multitude of moods.

A damning and harrowing indictment against capital punishment, 'I Want to Live!' pulls no punches in its depiction of the true-life travails of Barbara Graham, whose life of petty crime spiralled out of control, leading to a murder rap and death sentence. Though the veracity of this sympathetic account has been questioned, Robert Wise's uncompromising film meticulously explores the prison and justice systems, and remains a riveting - and occasionally uncomfortable - viewing experience. Susan Hayward won a Best Actress Oscar for her bravura portrayal, and though she overacts at times, she captures the essence of a complex woman who was defined by her bad decisions. Twilight Time's Blu-ray presentation skimps on supplements, but features strong video and audio transfers and typically classy packaging. Harsh, brassy, and in your face, 'I Want to Live!' is as tough and raw as its heroine, and earns a solid recommendation.