Arthur Bishop (Jason Statham) returns as the Mechanic in the sequel to the 2011 action-thriller. When the deceitful actions of a cunning but beautiful woman (Jessica Alba) force him to return to the life he left behind, Bishop's life is once again in danger as he has to complete an impossible list of assassinations of the most dangerous men in the world.

At this point in his career, if you've seen a Jason Statham movie, you've seen them all. They're virtually identical to one another, the same formulaic drivel, layered with the sort of nuance and sophistication as a pie in the face. If the British-born actor is among the cast members, audiences can always expect an abundance of broken bones, random explosions, and anything in the vicinity being utterly destroyed. Stratham's latest modestly-budgeted actioner, 'Mechanic: Resurrection,' is ultimately no different, if not exactly the same as every movie he has starred in. The sequel to 2011's surprise remake — and this one also turned out to be another surprise sleeper hit — is another routine, check-your-brain at the door vehicle.

Mr. Stratham is pretty much sleepwalking in his return as grumpy orphan boy turned professional assassin Arthur Bishop, offering little to the imagination or the opportunity to reveal emotional range. After cleverly escaping certain death in the last movie — or roll-your-eyes, perfectly orchestrated, depending on who you ask — the brooding, grouchy-looking killer enjoys retirement on a boat in Brazil, yet he still feels the need to use explosives as his home security system. (You know, because that won't come up in the next few minutes or so.) But don't fret, however. Because in spite of his looks and chipper disposition, he's actually a big ole teddy bear deep down inside. It's really, really deep down requiring some strenuous digging, but rest a sure, it's there. Just look at the way he handles and cares for a vinyl record while enjoying a cup of coffee and the paper. As we all know, a person who appreciates the sound of vinyl on a crazy expensive Pro-Ject turntable is always a good indicator of their altruistic personality. 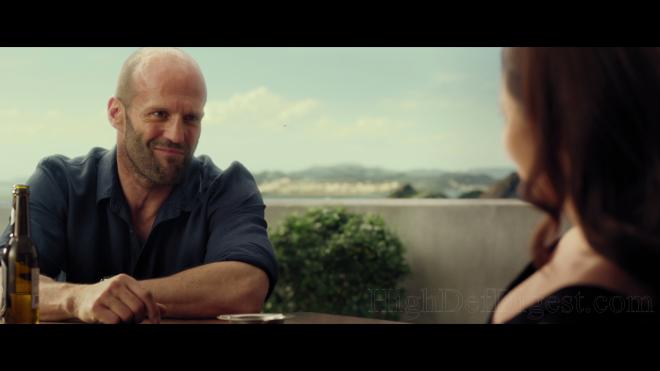 And with that footnote established and understood — as it will come up again when the damsel in distress makes her sudden appearance in an ever so subtle punch to the gut — baddies interrupt our anti-hero's relaxing morning routine. Cue the crushing sounds of bones popping and the pounding of faces into tables as dizzying, rapid-fire editing turns the fight choreography into a single, woozy blur, culminating into an impossibly daring escape and, of course, an explosion. The man responsible for the chaotic morning call is the not-so-mysterious, fellow orphan playmate Crain (Sam Hazeldine), who simply wants to hire our protagonist for a three-kill mission. And what's his compensation? He won't have his army of henchmen, who are about as effective at their jobs as the Minions, bump off Bishop's new love interest Gina (Jessica Alba), the aforementioned damsel. Man, being a professional assassin with the talent for making a murder look accidental sure is a tough racket, especially if one is really in high demand.

The rest of 'Mechanic: Resurrection' is a paint-by-numbers actioner and ironically mechanical, which is disappointing from German director Dennis Gansel, who left quite the impression a few years ago with 'The Wave' and 'We Are the Night.' Action sequences are visually interesting, in part thanks to the camerawork of Daniel Gottschalk, but none of it feels original or the least bit thrilling. If Ethan Hunt didn't already surround himself with competent spies or ever felt like taking day off from performing his own stunts, then Bishop would be well suited for the task of completing impossible missions. He scales high-rises to do some minor plumbing work and penetrates the impenetrable fortresses of Bulgaria owned by Tommy Lee Jones as arms dealer — and part-time Las Vegas lounge singer — Max Adams. The tediousness and boredom ultimately comes down to a predictable script that never presents Bishop with a real challenge or genuine threat to him or his girl. He's designed, from the opening moments, to win and be smarter than anyone else, so what's the point. Which is to say, don't even bother with this.

Summit and Lionsgate Home Entertainment bring 'Mechanic: Ressurection' to Blu-ray as a two-disc combo pack with a flyer for an UltraViolet Digital Copy. The Region A locked, BD50 disc is joined by a DVD-9 copy of the movie inside a blue, eco-cutout case with a shiny slipcover. After several skippable trailers, viewers are taken to a menu screen with full-motion clips and music.

Bishop is raised from the dead thanks to an exemplary, highly-detailed AVC-encoded transfer, offering several demo-worthy moments that should wow viewers.

The best and most impressive scenes are those taking place at Mae's beach house in Thailand, although the other Asian and Australia locations look just as good. The ocean water is bright blue while the tops of every ripple and wave are distinct, and viewers can plainly make out every grain of sand shimmering in the sun. The edges of palm branches, the points of the dried palm-leaf roofs of houses and the dry, aged wood grain is consistently razor-sharp. The faces of the cast and extras appear natural and appropriate to the climate with excellent complexions, revealing every blemish, negligible scar and wrinkle. When the action suddenly moves to Europe, on the other hand, the scenery is not quite as defined, most notably when our hero assassin chases an arms dealer in an underground bunker in Bulgaria.

Shot on a pair of Red camera systems, the rest of the 1080p picture comes with outstanding contrast and clean, crisp whites. The photography of Daniel Gottschalk displays a gorgeous and varied array of colors throughout. Showing animated, luxurious primaries and accurate, warm secondary hues, those sequences mentioned above are simply marvelous to gawk at — and I'm not just referring to Jessica Alba in a two-piece. Unfortunately, the cinematography makes a sudden left turn when landing in Bulgaria where things become dour, gray and gloomy, but that appears intentional on the part of the filmmakers. Thankfully, black levels remain consistent and inky rich without sacrificing any of the finer details in the shadows, providing the 2.40:1 image with an attractive cinematic quality.

The sassy, ironic mechanic bursts forth unto the screen with a fantastic Dolby Atmos soundtrack that'll put viewers right in the middle of the action on various occasions.

In truth, it doesn't compare to some of the best object-based tracks we've heard in other movies, but when it does, it is highly amusing. When the action erupts, debris flies overhead and to the sides, creating some very satisfying moments of immersion. Ambient effects occasionally bleed into the ceiling speakers with discrete effectiveness and excellent directionality, particularly the scene when Bishop first meets with Crain. The sound of wind blowing and exotic birds singing are heard everywhere to create an amazing dome-like aural experience. Helicopters also pan from the back of the room, overhead and to the front and back again with stunning realism while the noise of their blades resonate all around and above when inside the cockpit.

The front soundstage is definitely the movie's most impressive aspect, delivering an incredibly expansive and broad soundscape with noteworthy channel balance. Whether it's cars or bullets, the action moves from one side to the other with fluid precision and fidelity while littered with a variety of convincing off-screen activity that bleeds into the front heights. The lossless mix remains distinct and dynamic with room-penetrating clarity, exhibiting outstanding detailing between the mids and highs even during the loudest segments. Dialogue and character interaction does not falter amid the mayhem. A powerful and often authoritative low-end delivers a palpable, resonating presence, making it a great complement to the visuals.

'Mechanic: Resurrection' is the sequel to 2011's sleeper hit with some visually interesting camerawork but is ultimately a boring, paint-by-numbers actioner. Thanks to a predictable script that never presents its anti-hero with any credible challenges or threats, the movie barely worth checking out for anyone who enjoyed the first movie. The Blu-ray arrives with a fantastic audio and video presentation with several demo-worthy moments, but the supplements package is pretty disappointing, making this another case of good disc, bad flick.

Sale Price 6.99
List Price 14.99
Buy Now
3rd Party 29
In Stock.
See what people are saying about this story or others
See Comments in Forum
Previous Next
Pre-Orders
Tomorrow's latest releases