Overview - May Munro (Sharon Stone) is a drop-dead beauty with a fatal past. She’s sworn death to the mobsters wh o murdered her parents and she also knows the right man for the job: ex-CIA explosives expert Ray Quick (Sylvester Stallone). Miami’s playground of the rich becomes an incendiary slayground as May lures the killers and Ray ingeniously detonates them into ashes. But a vicious mob boss (Rod Steiger), his brash son (Eric Roberts) and a psychotic hired gun (James Woods) with a lethal grudge against Quick won’t go without a fight. And the feverish passions shared by the two avengers can’t hide an ominious question from Ray. Is May falling for him…or is she setting him up too?
OVERALL
A Rental at Best

'The Specialist' is so hilariously silly it's hard to ever take it seriously. It's so brooding, and so melodramatic, that it would seem every actor involved believes they're in something better. Especially James Woods, who never misses a moment to remind you he's the bad guy, starting with the intense sneer he gives to a branch as he brushes it out of his face during the opening of the movie. If you blink you miss it, but now you know to watch for it. Watch for his lip to curl up into that evil smirk. He's going to be trouble, you just know it.

Stallone plays bomb expert Ray Quick who was once teammates with Ned (Woods) until things went south in the opening scene. Once employed by the government, now Ray lives out his life taking odd jobs here and there to blow stuff up. He's good at what he does, that's why they call him a "specialist."

Everything is fine and dandy until a sultry voice contacts Ray for a proposition. On the other end of the phone is May (Sharon Stone) who sexily lays out her plans to destroy the Miami mafia men who killed her family. Ray knows there's something fishy about this lady, but he tries to help her out anyway because that's just the kind of guy he is.

'The Specialist's tone is so fantastically over the top. The soundtrack echoes with sad saxophones or a lonely horn as Ray stares blankly off into the distance. I'm sure director Luis Llosa meant for the movie to have more a dramatic noir feel to it, but it just comes off as deliciously absurd.

The best (and by that I mean the worst) parts of the movie come when we hear Stone's raspy voice describing how the mafia killed her father. How she wants to get back at them, and how she wants Ray to do it. Ray follows her around Miami with a tiny ear piece listening to these conversations over and over. How he keeps a straight face while doing it, I have no idea.

Stone does little more than scowl and overact. During one particular voiceover sequence she's dressed in black lingerie dancing around in slow circles as she's illuminated by moonlight from the outside. The camera wiggles up and down her body showing us every curve. It stops at her mouth, she parts her lips and we hear a sexy little breath escape. Then we realize, isn't this a movie about some dude who makes bombs and blows people up? Why is none of that happening right now? Oh, that's right, because Stone chews up scenery without saying anything. She just stands there, sometimes naked. Only her nakedness serves no other purpose than to get an R-rating and some breasts in the movie, because as usual, Sharon Stone is so willing to get naked.

'The Specialist' makes me laugh. I can't outright hate it just because it's so delightfully silly. I do take exception to having Stallone in a movie where he doesn't actually fight anyone, except some ruffians on a bus. That's the scene where we realize that Ray is indeed the explosive expert equivalent of Robin Hood. Every other "action" scene involves Ray slyly planting a concealed explosive devise and then casually walking away. The entire movie you're waiting for a big action scene where Stallone runs around kicking ass and taking names, but it never happens. Then the end comes and for some strange reason they begin playing "Turn the Beat Around" by Gloria Estefan and then it hits us. This movie has embraced its absurdity and so have we.

'The Specialist' comes in a regular old Blu-ray keepcase and has been pressed onto a 25-GB Blu-ray disc. This release should work for region A and B. 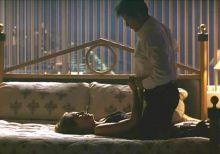 Warner has done a decent job bringing 'The Specialist' into the realm of high definition. This video presentation isn't going to blow you away – it has faults here and there – but on the whole it's a serviceable 1080p transfer for a lesser known catalogue title like this.

From the beginning you can tell that this Blu-ray is a huge step up from 'The Specialist' on DVD. Close ups on Stallone and Woods reveal striking pores, beads of sweat, and individual specks of dirt and grime. Fine detail is great during these kinds of close ups, but the further the movie progresses the more faces become smeary and waxy looking. This happens particularly during mid-range to long-range photography. Grain levels are pretty inconsistent also varying from light to noisy and then light again.

'The Specialist' has that soft early 90s feel to it, so soft shots are fairly frequent. However these have more to do with the source material than the transfer. Could it be better? Sure. But, it's hard to expect Warner to spend copious amounts of time restoring a third-rate action movie like 'The Specialist.' What we have here is reasonable and that's good enough for me.

What would you expect from a movie full of explosions? Yep, you guessed it! A buffet of low-end sonics that will rumble the pictures right off your wall. 'The Specialist' has been handed a DTS-HD Master Audio 5.1 track that has a particular interest in booming bass.

As for the mix's other features, the sappy soundtrack bleeds from the front into the rear channels so you can become ensconced in dreary horns. Dialogue is always clear, but directionality seemed just a little too forced. There's on part where a man walks out of a card game with his friends and as soon as he leaves the friends start laughing from the rear channel. It's pumped up so you will notice that this is indeed a surround track. It doesn't so much make you feel immersed in the movie as it makes you think some jackass is hiding behind your couch yelling at you.

Now we can get back to the ridiculous amounts of LFE in this movie. If you love your bass loud and explosive then this is the movie for you. It won't truly blow you away like 'Battle: Los Angeles' might, but it will keep on rumbling until the movie comes to an end and you're baffled as to way Gloria Estefan has suddenly invaded the soundtrack. 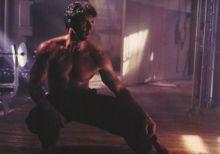 'The Specialist' is so preposterous that it's hard not to like it, even if you dig it for its many imperfections. However, I can't forgive a movie that stars Stallone and doesn't have him killing someone with his bare hands every five minutes. Stallone does a lot of walking, staring, and more walking in this movie. Stone shows us exactly why she was never meant to carry movies. She's so over the top here it's hard to think that she was once considered one of Hollywood's leading ladies. The video and audio are decent enough, but if you're looking for a bit of random fun then all you'll need to do is rent 'The Specialist.' Or wait for it to hit the bargain bin.

Sale Price 14.99
List Price 19.98
Buy Now
3rd Party 5.99
In Stock.
See what people are saying about this story or others
See Comments in Forum
Previous Next
Pre-Orders
Tomorrow's latest releases