After his engagement suddenly ends, Joshy and a few of his friends decide to take advantage of what was supposed to be his bachelor party in Ojai, California. In their attempt to help Joshy deal with the recent turn of events, the guys turn the getaway into a raucous weekend filled with drugs, booze, debauchery, and hot tubs. Written and directed by Jeff Baena, featuring a score by Devendra Banhart and an ensemble cast of hilarious comedic talents-including Thomas Middleditch (HBO's "Silicon Valley"), Adam Pally (TV's "Happy Endings"), Alex Ross Perry (director of Queen of Earth), Nick Kroll (TV's "The League"), Brett Gelman (TV's "Married") and Jenny Slate (Obvious Child) -Jeff Baena's sophomore feature is a wickedly amusing portrayal of male bonding and emotional incompetence.

Drama and comedy often make good genre bedfellows. Sometimes the best way to deal with the pain life deals us is to have a good laugh. That doesn't necessarily mean a film should take a serious subject and run away with it and turn it into a slapstick comedy - although that does work from time to time. The drama/comedy mashup can be a cathartic and relatable experience for the audience so long as it's done well. When it isn't handled well, when there is an imbalance with the comedy and drama, the results are often painfully awkward to watch. Such is the case with writer-director Jeff Baena's 'Joshy.' The film's heart is in the right place, but with some oddly awkward characters and events, the film is more uncomfortable than funny.

Josh (Thomas Middleditch) was supposed to be having the biggest and best bachelor party with his buddies. The party is still on, but, there won't be a wedding. Josh's fiance Rachel (Alison Brie) killed herself four months earlier on Josh's birthday. Before Rachel's death, Josh and his buddies did rent a cabin in the mountains and rather than lose the expensive deposit, they decide to go for it and have a great weekend and help Josh feel some amount of normalcy again. The problem is, only three of Josh's friends show up. The very married but also a bit of a stoner Ari (Adam Pally) the awkward nerd without any social skills Adam (Alex Ross Perry), and the fun-loving party machine Eric (Nick Kroll) and his buddy Greg (Brett Gelman). While everyone came up to the cabin to be there for Josh, the weekend quickly dissolves into a mess when all of Josh's friends bring their own personal baggage to the party. Things get even crazier when Rachel's Mom (Lisa Edelstein) and Dad (Paul Reiser) show up to clear the air.

I'm going to preface my critique by stating that I think Jeff Baena is a great writer. Just watch 'I Heart Huckabees.' As a co-writer on that film, he shows that he has a solid grasp of characters, dialogue, and how to make ordinary situations funny. He brings a lot of those same touches to his film 'Joshy,' the only problem is, I just don't know what the purpose of the film is. Is it about togetherness and the bonds of friendship in the face of tragedy? I'm just at a loss with this one. At its heart there is a relatable and interesting story within 'Joshy,' but it never really comes together as a comedy or a drama. Perhaps the biggest issue the film faces is the lack of focus on Thomas Middleditch's Josh. As the titular character, he has very little time to be a focal point within the story. It's about his friends, and to be honest, they're not the most compelling people to hang around with. Their actions, motivations, behavior ticks don't really make a whole lot of sense and hold too much weight on the story. 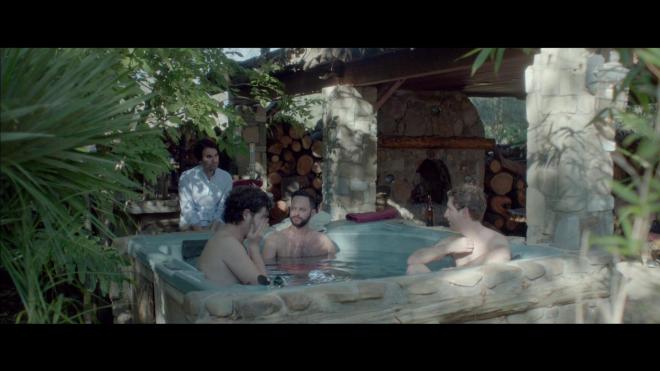 At the very least, 'Joshy' showcases some fantastic performances. Thomas Middleditch is great and can show has dramatic and comedic chops with the few moments he's given. Adam Pally's Ari is an understandable and relatable guy even if his attraction to another woman isn't entirely explained. Alex Ross Perry's Adam is an awkward delight as he actually can generate some decent chuckles as he is way outside of his comfort zone with the party. Nick Roll's Eric is fun in small doses, like the party animal guy you knew fifteen years ago in college but don't really need to ever hang out with again for very long. Beyond the performances, there's just nowhere for these characters to go. They don't feel like actual friends of Josh making the movie seem extra strange. We know so little about Josh, what happened with Rachel, what happened after her death. These are the people that should be having private conversations between one another about what happened more than they do. They're oddly silent so by the time Rachel's parents show up and a lot of this information finally comes to light, it's an oddly out of place confrontation where they accuse Josh of murdering their daughter.

Before sitting down to this review I honestly hadn't even heard of 'Joshy.' I'd seen Baena's previous efforts on 'Life After Beth' and thought that film was decent, not amazing, but entertaining. When I realized Baena was behind 'Joshy' I got a little excited, but as the movie progressed, that excitement waned. The various story, plot and character elements for a good drama comedy are there, but they never really come together in a rewarding way. There are some flashes of potential, but ultimately everything amounts to a rather stale outing.

'Joshy' arrives on Blu-ray courtesy of Lionsgate. Pressed onto a Region A BD25 disc, the disc is housed in an eco-friendly case with identical slipcover artwork. Also included is a Digital HD voucher. The disc opens with trailers for other Lionsgate releases before arriving at a static image main menu with traditional navigation options.

'Joshy' arrives on Blu-ray with a pleasing if unremarkable 2.40:1 1080p transfer. The image maintains a nice film-like appearance, but it would seem as if contrast was kicked up a notch too high. The image frequently looks too bright and as a result, details, colors, and depth tend to suffer. Colors feel a bit too light for a rich and lush location. Those green leaves look a little too lime-green. Flesh tones are natural enough even though some of the actors look a bit too pale in places. Depth can fluctuate depending on the scene. Night scenes tend to look the best offering some inky blacks and rich shadows. Daylight scenes with their overly bright nature skew that depth back and shadows appear more grey than black. The image is at least free of any compression anomalies. Just don't expect a reference-quality image.

For a quiet and conversational drama comedy, 'Joshy' makes decent use of its English DTS-HD MA 5.1 audio mix. There is rarely any full use of the surround effect as the sides and rears take care of the atmospherics and background noises while the front channels take care of the dialogue. Scoring, sounds effects, and dialogue is well balanced never in conflict with one another giving the mix a nice natural quality to it. There is a right amount of echo to make the cabin feel real. Imaging is decent enough when a particular scene calls for it, just don't expect too much channel movement as this is a very front and center mix. All around a good audio track.

Audio Commentary: Writer/Direct Jeff Baena, Adam Pally, and Thomas Middleditch provide an engaging and entertaining commentary. The three work well together and go into a lot of the making of the film and character arcs, there are some odd gaps and they can be a bit goofy, but they keep the energy going.

There is a great concept motivating 'Joshy.' There is a great story to be told about how friends come together when tragedy strikes one of the group. Sadly, this movie just doesn't do much with it. The film features some great performances but doesn't go anywhere as there's too much obvious improvisational work going on in scenes that required a much tighter script. It's a good effort, but not one I found to be completely rewarding. 'Lionsgate' releases the film onto Blu-ray with a decent if unimpressive video transfer, a solid audio mix, and an informative commentary track. If you're curious about this movie, it's a rental first.

Sale Price 10.3
List Price 15.99
Buy Now
3rd Party 10.3
In Stock.
See what people are saying about this story or others
See Comments in Forum
Previous Next
Pre-Orders
Tomorrow's latest releases