When Rebecca left home, she thought she left her childhood fears behind. Growing up, she was never really sure of what was and wasn't real when the lights went out…and now her little brother, Martin, is experiencing the same unexplained and terrifying events that had once tested her sanity and threatened her safety. A frightening entity with a mysterious attachment to their mother, Sophie, has reemerged. But this time, as Rebecca gets closer to unlocking the truth, there is no denying that all their lives are in danger…once the lights go out.

A good horror picture is one that knows its limitations. Whether it be because the budget is small or its concept is relatively slim, it's important not to go overboard with it. While it may not be the best horror film of the decade, Director David F. Sandberg's 'Lights Out' proves the point that a little creativity can go a long distance towards scaring an audience. From a script by Eric Heisserer and starring Teresa Palmer and Maria Bello, a simple concept becomes a creepy and well-paced scare fest that allows the audience to enjoy being frightened.

Creepy things do go bump in the night. Rebecca (Teresa Palmer) learned this truth first hand growing up with her mentally troubled mother Sophie (Maria Bello). Where most childhood fears are irrational and made up, this one was very real and her name is Diana (Alicia Vela-Bailey). For years Rebecca thought the tall, lanky, black figure with glowing eyes was a figment of her imagination, but when her little brother Martin (Gabriel Bateman) starts seeing Diana and experiencing her terrors firsthand, Rebecca is forced to return home and face her mother. As the siblings try to help their mother get over her troubles, they learn a dark and sinister secret about Diana. If they hope to survive and save their mother's life, they'll have to bring these secrets and Diana into the light.

I'll be upfront and say that in no way is David F. Sandberg's 'Lights Out' the greatest horror flick to come out in the last decade - but it is pretty darn good! I'm not quite sure how well it'll hold up to multiple viewings over the years, but for what it is, it does everything right. Like comedy, horror is a subjective experience and depends entirely on the personal tastes of the viewer. If you're someone who relishes the grotesque indulgences of the splatter horror and terror sub-genres, you're likely going to feel left in the dark with 'Lights Out.' While there are some good gore effects on display, they're brief and not the focus of the film. If you're someone who enjoys the immersive experience of light and sound tricks, 'Lights Out' is right up your alley. 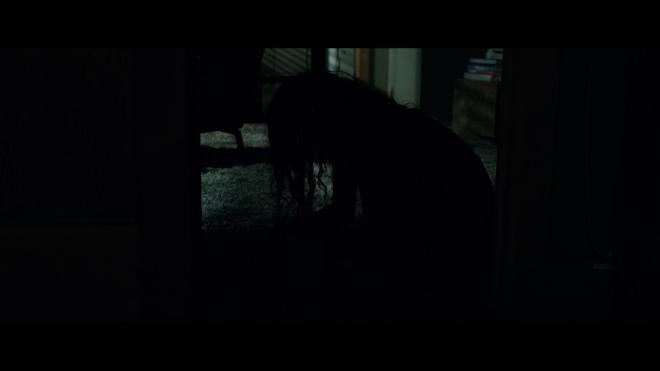 If you've seen enough horror films over the years, the bag of tricks employed by 'Lights Out' isn't all that unique or new, they're just used incredibly effectively. By playing with light and sound and how they relate to the Diana shadow monster is an example of brilliant editing and sound design. The character lives in the shadows so all we get are little movements of shapes and a scratch or two to signify Diana is coming, and then we have to wait. And wait. And wait a little more until she finally pops out at one of our main characters. One would think that you would get tired of this jump scare technique but Sandberg and his writer Eric Heisser concoct enough creative uses of these tricks that 'Lights Out' keeps you on the edge of your seat, makes you jump, and then laugh from the tension release. You're not laughing at the film, you're laughing at how you reacted to it. It's a great way to watch a flick - especially one that begs you to keep the lights out while you watch.

Story simplicity aside, I've got to give a lot of credit to leads Teresa Palmer and Maria Bello for carrying the drama and helping make the scares believable. If there is one thing I would have liked more from 'Lights Out' is for it these two to have had additional time together. So much of the plot hinges on Palmer's Rebecca and Bello's Sophie being estranged from one another that when they're around each other, we never really get a full sense of the conflict between them. There is mention of Rebecca's father leaving the family and Rebecca subsequently leaving herself when her Mom goes off her meds, but that's it. I would have liked a few more scenes between them - even though the moments they do share are very good and well acted. On that note, I have to mention Gabriel Bateman as little Martin. The child actor is asked to carry a lot of weight for a little kid, and for the most part, succeeds. He plays terrified well enough but his character is often a bit too wise for his years to be entirely believable. As a whole, this cast comes together nicely to create a believable little family you want to see survive a night of terror.

At the end of the day, 'Lights Out' is a lean, mean, creepy little horror machine. It's not intent on scaring you out of your wits but instead, focuses on keeping you on edge and constantly making you jump. This isn't a movie that I will be pulling out frequently for multiple viewings because the tricks can really only work once in awhile. Even though I knew what was going to happen during an early sequence because it was so prominently featured in the trailer, that flicking light switch sequence still gave me a big jump causing me to let out an unconscious shout of fright followed by a short barrage of expletives directed at myself and how well the movie got me. I had a blast with this one and I hope other horror hounds like myself will too. Now I just hope that in a few months or a year when I want to see it again that it'll still be as much fun.

'Lights Out' arrives on Blu-ray courtesy of Warner Bros. Home Video and is pressed onto a Region A BD-50 disc. The disc is housed in an eco-friendly Blu-ray case and comes with an Ultraviolet Digital HD voucher slip. The disc opens with trailers for other upcoming releases and a 4k UHD promo before arriving at a static image main menu with traditional navigation options.

As with most films, a sense of light, shadow, color, and depth are important, but they're essential to the success of a film like 'Lights Out' I'm pleased to report that the digitally sourced 2.40:1 1080p transfer for 'Lights Out' is a knockout. The film features solid detail levels allowing you to always appreciate foreground and background objects, while also managing to keep certain parts of the frame just out of focus. These out of focus moments are what keep this transfer so lively because in any one of those dark spots could be an evil creepy creature to make you jump. What really impressed me with this transfer is the tremendous sense of depth. This is a really dark movie, but the image never feels flat or lifeless or without any detail. Had they been so inclined the filmmakers could have easily converted the image to 3D - even though it's not needed to enjoy the film. There are several great uses of lighting setups, from the blinking red "Tattoo" sign outside of Rebecca's apartment to the spotlights in the warehouse to the dark closets of Sophie's home, the cinematography by Mark Spencer is a real joy because it constantly keeps you on edge. As such, black levels are deep and inky with amazing subtle shadow separation without any crush issues. The only minor quibble were a couple moments of video noise, but they're so slim and fleeting they're barely worth mentioning.

Equally impressive as the video presentation of 'Lights Out' is the impressive English DTS-HD MA 5.1 audio mix. Silence is golden for this film and the filmmakers were wise not to fill the space with too many background effects or an over the top score. I'm grateful that Benjamin Wallfisch's score is as subdued as it is, because this film's scare tactics hinge on the creepy little noises that go bump in the night. Even with such a subtle sound design, the 5.1 surround mix is incredibly immersive. Even when the scene is quiet or nearly silent, there is plenty of space and atmosphere in the mix so that when a big jump does pop it's got the right edge to it to surprise you. As for the rest of the show, everything is pitch perfect. Dialogue comes through clearly without any issues and there is nice LFE presence throughout to keep those low dreadful tones rumbling in all the right ways.

Deleted Scenes: (HD 13:58) At first, this collection of alternate takes and scene extensions are comprised of the trite useless bits that wouldn't further the plot - and then the alternate extended ending comes in. I'd heard about this only in passing that the film was originally going to be about ten minutes longer but was trimmed because of this scene. It's a good reason they left this bugger out. 'Lights Out' was a lean and mean creep fest of a horror picture. This ending takes everything that you'd witnessed in the preceding 80 minutes and makes it a joke. You'll have to see it to believe it. This is where test screenings are important because the filmmakers wisely left this stinker ending on the cutting room floor - but it makes an amazing extra!

'Lights Out' is a traditional-style horror thriller that relies on the tried and true methods of lighting and sound effects with a little supernatural lore tossed in to create a creepy and effective little fright flick. The main plot of the movie may be a bit slim, but damn if this wasn't a hell of a great little movie to watch with the lights out. Watch it with someone who doesn't usually watch horror movies for a little extra fun! Warner Bros. brings 'Lights Out' to Blu-ray with an absolutely beautiful A/V presentation. Extras may one by some deleted material, but they're still pretty good. I'd have loved an audio commentary - maybe they're saving that for a double dip later down the line? At the end of the day, I'm still going to call 'Lights Out' highly recommended and its Blu-ray release is perfectly timed for the Halloween season.

Sale Price 11.41
List Price 14.97
Buy Now
3rd Party 10
In Stock.
See what people are saying about this story or others
See Comments in Forum
Previous Next
Pre-Orders
Tomorrow's latest releases