In her quest for fame, drama student Stella gets caught in the grip of a mysterious and deadly stage school.

Stella longs to be an actress. When she is accepted to a private school in Berlin, her dream seems to come true. But there is something wrong with the "Matteusz Gdula-Institute". In the seventies, the school´s founder, Matteusz Gdula, practiced a learning style that promised to let students shine by driving them to their mental limits. In the end his method was banned, as mysterious deaths occurred during his lessons and Gdula committed suicide. At night, Stella hears eerie sounds in the corridors of the school. A fellow student disappears. Stella suspects that behind the closed door to the abandoned, forbidden wing of the school lurks a bloody secret. A secret that kills the students...

There's some truth to that old adage "Never judge a book by its cover." As one writes reviews for back catalogue titles, you come across a few flicks that actually end up surprising you. You'd think just by looking at the cover art or the plot breakdown that the movie in question would be a total train wreck, but every now and again one sneaks through that ends up surprising you. It doesn't always have to be the greatest thing you've ever seen, but at the very least, better than you expected. This is the case with German filmmaker Andreas Marschall's 2011 film 'Masks.' While certainly a flawed film, it is impressively creepy and proves to be a skilled and effective throwback to Italian Giallo movies.

For Stella (Susen Ermich), acting isn't a job, it's a passion, an art. The problem is, she's really not all that good at it. Her teachers recognize that love and passion for the craft, but they're also brutally honest towards her - she's got something but she needs refining. When the opportunity to study at the famed Matteusz Gdula-Institute to hone her craft. During the 70s, Matteusz Gdula was an icon for actors as he was able to bring their abilities to a primal intensity. By actually making them feel the emotion, he was able to make his students actually become their characters. Unfortunately, the result of these efforts damaged a number of studios physically as well as mentally. When his methods were banned, Gdula committed suicide. But when Stella learns about this extreme training method her devotion to becoming a premier actress can't be satisfied, she must go all the way. She must learn these methods. However, when fellow students turn up missing and a killer stalks the school grounds, it has become apparent that someone is taking Gdula's methods to their absolute extreme.

Sitting down to watch 'Masks,' I didn't really know what to expect. Considering the cover artwork, that the film was from 2011 and I had never heard of it before it arrived on my doorstep, I was expecting your run-of-the-mill post-2000s torture-porn hack and slash horror flick. Given the state of horror and how few standouts there have been in the genre in recent years, you could forgive my assumption that 'Masks' would follow in that pattern. It didn't take long for me to start to have to eat some crow. As the film's opening subsided and it started to find it's rhythms, I frequently caught myself saying "You know what? This is actually pretty good!" Amazingly enough, by the time the end credits rolled, the film held onto its momentum and rarely faltered. The final act could be a bit cliche and rather expected - the mystery identity of the killer isn't too much of a surprise - but the rest of the film is surprisingly effective. 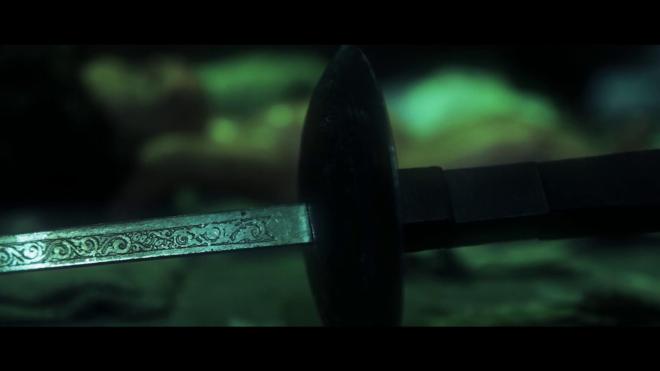 I think what really struck me is that 'Masks' follows the tried and true tropes of a Giallo film, murder, torture, frank sexuality, without being exploitive of either element. I'm reminded of the 'Hostel' movies in this way as an example where a film tried to capture those elements but went too far with them. It tried to pay homage through gratuitous bloodletting but forgot that at their heart Giallo movies are about titillation. Not necessarily in the strictest sexual terms of the word - even though that is an element - I mean in the sense that it teases you all of these moments. It gives you a hint of the sexual aspects, it gives you a peek of the gore and bloodletting, it alludes to the events to come, and then everything comes out at the climax. 'Masks' takes the smart choice of taking its time to set up all of these elements. Any studied horror genre fan will be able to keep ahead of what happens in this movie. It is predictable to a fault. However, what it gets right, it does well and it's a gory good time!

A good underground horror movie is a rare find, especially in a year dominated by bad sequels and needless remakes. Discovering 'Masks' was a nice little breath of fresh air. It's not the greatest horror film ever made, but it is still a very good one with a creepy atmosphere, a moody score, and some great performances - especially from lead actress Susen Ermich. She has a lot of weight to carry for a little film and she manages to hold the show together without being your standard damsel in destress who runs upstairs while the killer walks slowly behind her. Horror fans should find a lot to appreciate with this little movie. I ended up liking it a whole lot more than I had expected to. It's not altogether scary, but it does have a few jumps, a couple surprises, and its share of gory kills! What more could you ask for in a horror flick?

'Masks' arrives on Blu-ray curtesy of Reel Gore Releasing. Pressed onto a Region Free BD25 disc, the Blu-ray is part of a three-disc limited edition set that includes a DVD copy of the film as well as a CD featuring the film's soundtrack by Sebastian Levermann. The Blu-ray and DVD are housed in a standard 2-disc Blu-ray case with identical slip cover and the CD is housed in a card paper sleeve along the side. Also included is a booklet containing stills from the film, a forward from the director as well as an interview with him about the film. The Blu-ray disc opens with trailers for upcoming Reel Gore Releasing titles before arriving at an animated main menu wth traditional navigation options.

The 2.35:1 1080p provided for 'Masks' is a case of taking the good with the bad. While a lot of the film's imagery and appearance look great on the format, there is a softness to the image that is difficult to ignore. Close ups tend to look the best and provide a lot of facial details, but middle and wide shots have an unfortunate tendency to have a smeary softness to them. Some of this is intentional depending on the scene in question, other parts just lack clarity and have a very "video" look to them. Colors are a bit difficult to judge because much of the time there is some very obvious and purposeful filtering going on. Black levels are also a bit difficult to grade as some sequences showcase some impressive depth and shadow separation while others can make the film look flat and blacks can appear soft and hazy. It's not a terrible looking image by any stretch, but it does wear its faults on its sleeve.

'Masks' is a big winner in the audio department with a stellar and creepy German DTS-HD MA 5.1 mix with English subtitles. Dialogue is front and center and never difficult to hear or distorted - unless it's an obvious intentional effect. What is really impressive here is the sense of space and atmosphere and how well the mix plays with silence. I've long loved horror movies that know how to go bump in the night, and 'Masks' knows how to let those quiet moments set the tone and mood of the scene before the truly scary stuff sets in. Elements like sound effects, scoring, and background atmospherics are in balance allowing for any given scene to have a welcome sense of dimension without any of the elements tripping over each other. Levels are on point as I never felt the need to monitor my volume - even during the quiet conversational moments. I would suggest that you keep your volume a tad louder than normal, just so when the big jumps happen the audio can give you a little extra blast for good measure.

Behind the Scenes: (HD 15:02) This is a pretty cool look at how the film was shot, small crew, tight locations with some very creative lighting.

Deleted Scenes: (HD 4:15) Nothing too necessary for the film here. These few moments are more mood and atmospheric moments rather than anything that needed to be in the film.

'Masks' may not be the greatest horror movie ever made, but it most certainly isn't the worst. Just because the film may be over five years old and you've never heard of it doesn't mean it isn't worth checking out. I found it to be a lean and mean little chiller with plenty to offer in the scares department. Give it a look-see for yourself. RealGore Releasing brings the film to Blu-ray in a limited edition package complete with soundtrack and a booklet with interviews. The video has its baked in faults but the audio is impressive. The handful of bonus features are worth looking at but don't really offer much insight into the making of the film itself. That said, if you're a horror fan in need of a new fix, 'Masks' is absolutely worth a look.

Sale Price 164.95
Buy Now
3rd Party 164.95
In Stock.
See what people are saying about this story or others
See Comments in Forum
Previous Next
Pre-Orders
Tomorrow's latest releases