The Everly Brothers: Harmonies From Heaven

Harmonies from Heaven tells the story of the Everly Brothers, Phil and Don, focusing on the heyday of their careers in the fifties and sixties. Featuring new interview footage with surviving brother Don and archive interviews with Phil, it follows their career from child performers on their father's radio show, through their move to Nashville and the their relationship with publishers Acuff-Rose and in particular with the songwriting team of Felice and Boudleaux Bryant who provided many of their early hits, including their first million-seller Bye Bye Love. The film also features interviews with those inspired by the Everly Brothers including Art Garfunkel, Keith Richards, Graham Nash, Dave Edmunds, Tim Rice, Albert Lee, Waddy Wachtel and on into a younger generation with Jake Bugg.

The second disc in the set features a previously unreleased classic live performance from Australian TV, CHEQUERS NIGHTCLUB, SYDNEY from 1968.

Documentaries can be a tricky business. One would naturally expect the filmmaker to plumb the depths of its subject matter and pull up everything he can, muck and all. If one were to try and cast an event or a person in a positive or negative light, one should probably show every side - even if it changes the perception of the audience. At least that's what a good documentary will do. If it's to say that someone was a bad person, it would show that maybe they weren't a bad guy. If it wants to say a convicted criminal is innocent for 12 episodes of a TV show, it should at least address the evidence that points to that individual's guilt. When a documentary just sings the praises of someone, like a musical act for instance, and never really goes into much depth, that's not a documentary. That's a puff piece. Sadly, 'The Everly Brothers: Harmonies From Heaven' is a puff piece. We hear about how great Don and Phil Everly were as singers, but sadly the brothers are backstage as other musical acts dominate this show.

Directed by George Scott, 'The Everly Brothers: Harmonies From Heaven' is primarily focused on the golden years for the harmonizing sibling duo. From the late 1950s and into the 1960s, the Everly Brothers were a force to be reckoned with as their musicality was fairly unique for their time. As brothers, they had enough common traits and abilities to create some beautiful tunes. Their vocal ranges were similar but just different enough to give their harmonizing a soothing feel. They quickly rocketed up the charts as a popular country/rock duo.

At their peak, the Everly Brothers were like so many other acts of that era, they could sell mountains of records and the public would spin every single one of them. When the brothers made a television or radio appearance, it seemed like the world would stop just to hear these brothers do their thing. Some incredibly memorable songs came out during this time, but sadly those great hits can't hold back waning popularity. By the time the 1960s were coming to a close and the sounds of a generation were changing, the brothers were no longer a hot commodity. Behind the scenes fighting on top of sagging sales influenced their decision to disband and the brothers didn't even speak to one another for over a decade. 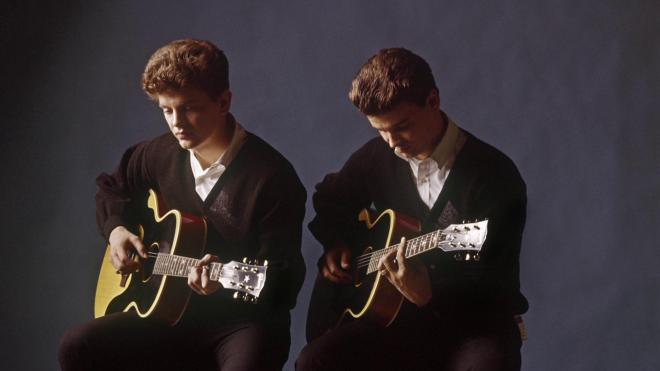 All of that information I just passed on to you is anecdotal material that I already knew the bulk of going into this documentary, and I'm not even that big a fan of their music. I like many of their songs and if one is on a radio or is cleverly used in a movie, I'm usually pretty glad to be hearing said song. This documentary only covers this material tangentially. For its entire runtime, this documentary is primarily focused on what other musicians have to say about the brothers. As Phil passed away in 2014, Don was the only one available for recent interview material. Sadly, as a primary source and someone we would want to hear from, he gets all of maybe ten minutes of actual screen time, at best. Even then, those precious few moments are in ten of fifteen-second sound bites. Phil makes an appearance through archival interviews but is virtually nonexistent. What we get instead is a parade of musicians talking about the Everly Brothers for the actual Everly Brothers.

While I understand the merit of having musicians like Art Garfunkle, Keith Richard, Tim Rice, Will Oldham, and Del Bryant in a documentary like this, they're given entirely too much focus. The documentary doesn't feel very chronological either. What sense of time and place in the brothers' career as a duo we do get comes from someone like Garfunkle saying "I was there when this happened…" or someone saying "in 1969 I bought this record" and so on. There isn't really any sense of thrust to this documentary beyond talking about how great the Everly Brothers were as musicians up to the point they broke up in 1973. Which is all fine and good, I'd expect that, but at the same time there needed to be more depth.

Beyond explaining that Don was a Democrat and Phil was a Republican, there's no explanation or detail given about their extremely contentious relationship. Things got so bad between them, there was so much hate they ended their careers together on stage in the middle of a performance and didn't speak for over ten years. Then in the 1980s they reconciled, reformed, and put out a couple more albums together. Those juicy details maybe are the stuff of some tabloid nonsense or what have you, but they're also relevant information that shows the audience the Everly Brothers as relatable people. 'The Everly Brothers: Harmonies From Heaven' is all surface material without any depth. This is fine and interesting for a little while, but even at an hour, it tested my patience because there's nothing particularly new or interesting here. In contrast, 'Tab Hunter Confidential' was a fascinating and personal documentary that gave you the nitty gritty history and the personal turmoil of the subject. That was a satisfying and educational experience. If you want to hear about how great Don and Phil are as musicians, this is the documentary you're after. If you're interested in learning about them as people, you're not going to find it here.

'The Everly Brothers: Harmonies From Heaven' arrives on Blu-ray courtesy of Eagle Vision Media as a two-disc Blu-ray and DVD set. The documentary is pressed onto a Region A BD25 disc, while the DVD contains the concert 'Live At Chequers Nightclub, Sidney.' Both discs are housed in a standard 2-disc Blu-ray case. The Blu-ray opens with an animated main menu with traditional navigation options.

While this documentary is comprised of archival footage, the dominant aspect ratio of 1.78:1 is how this feature's 1080i transfer is presented. Even with the caveat that the archival footage is in pretty rough shape and was limited to the recording technology of the era, this is a pretty lifeless looking image. While the interview subjects are cleanly rendered, details never really fully emerge as there is a persistent haziness to the image. Colors look natural depending on what video source you're looking at, but they never really leap off the screen. Likewise, depth comes and goes depending on the interview subject. It's a middling effort, not a terrible looking image for the type of documentary it is, but it's not the most beautiful thing you've ever seen either.

This documentary also comes with a solid DTS-HD MA 5.1 mix as well as a LPCM Stereo mix. Why that LPCM mix was included - or even why this is a 5.1 DTS mix - is a bit of a puzzlement. Both tracks are just fine. There's nothing singularly amazing about either of them as this is such a straight forward conversational documentary. There's not a lot of time spent listening to the Brothers sing unless it was to comment on their musical approach, and even then it's only for a line or two. Dialogue and the vocal music come through with great clarity. There just isn't much of a surround effect as the audio keeps to the center/stereo channels for the DTS track. As the LPCM does about the same thing, there's really very little difference between the two. Either track gets the job done.

Bonus Interviews: (HD 26:20) There is some interesting stuff here, but like the rest of the documentary it's not much content with the actual Everly Brothers but instead more thoughts and musings from a random musician.

The Everly Brothers Live at Chequers Nightclub, Sydney: (SD 47:34) Presented with a Dolby Digital 2.0 audio track, this concert film is honestly the real star of this set. As it's sourced from archival broadcast footage from 1968, the image quality is only so good, but the audio has plenty of kick to it.

For how short 'The Everly Brothers: Harmonies From Heaven' is, it could easily have been so much more. It's a puff piece, plain and simple. There's little story conflict, not a lot of personal details about the brothers, and sadly, the stars of the show take a backseat to guys like Art Garfunkle. Parts are interesting but don't expect to learn anything new that a good "Behind The Music" segment on MTV would have brought to screens. Thankfully the concert DVD is included because that's the only real saving grace with this Blu-ray/DVD set. Honestly, I was let down by this documentary in a big way. I just can't recommend it. Rent it if you must.

Sale Price 59.99
Buy Now
3rd Party 69.98
In Stock.
See what people are saying about this story or others
See Comments in Forum
Previous Next
Pre-Orders
Tomorrow's latest releases